Some people say it’s the little things in life that provide the most pleasure. I tend to agree. Over the last few years I have driven around Australia and been overwhelmed by the amount of big tacky tourist attractions around the country.

What is with the obsession with building big pieces of fruit and oversized animals?

The main offender is the Big Banana, which started the trend 40 years ago. The whopper has grown into one of the Coffs Coast’s most recognised attractions, with rides, educational tours, shows and an awe-inspiring selection of useless gifts. It even promotes the cheesy slogan: “It’s a whole bunch of fun.“ But I’m still not a fan.

I don’t understand the fascination with giant pieces of fruit. Kids don’t want to look at overgrown farming produce. They want to see a gigantic hotdog, a colossal hamburger, or an enormous Tim Tam biscuit.

Nearly every state has at least one big orange to attract passers by. However, I am yet to see any monument to celebrate the lemon. No wonder the unappreciated lemon is bitter. And if I see another Big Apple perched atop a fruit shop, I‘m going to call in a plague of Granny Smith-eating locusts.

It also seems every pub in the Top End has a Big Crocodile. I dread the day when a giant rogue crocodile wanders into an Outback pub and devours a few local bar flies who thought it was just another gimmick to make them drink more beer.

The abundance of these big things would be heaven for the world’s tallest man. And if King Kong holidayed in Oz he would have an absolute ball. He could feast on a neverending supply of giant fruit, hang out with other huge animals and play on the Big Rocking Horse.

One of the more confusing big things is the Big Potato at Robertson, NSW. Not surprisingly this jumbo brown spud is often mistaken for a giant turd. Maybe King Kong did visit the town and leave a “present” for the residents. I’m guessing the locals aren’t so proud of their poo. 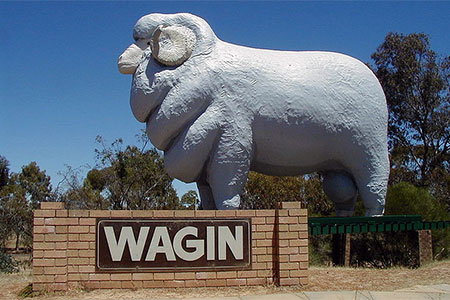 Another one to get rid of is the Big Ram at Wagin, which had to be moved when a new highway was built. It amazes me how they could move such a big sheep. Did they need a massive dog to round it up?

The locals at Rockhampton have really taken a liking to their tacky icon, the Big Bull. It seems the late night drinkers are obsessed with removing his fibreglass testicles. As soon as they are replaced the ball burglars pinch them straight away again.

On a positive note, I was rather impressed with the Big Barramundi, which is perched at the front of the Big Barramundi BBQ Garden in the far north Queensland town of Daintree. It is my only ambition in life to land such a massive fish. Overlooking the rainforest the gardens themselves are an enjoyable diversion and a convenient getaway from the crocs that prowl the Daintree River close by.

The Big Barra is one of the rare Big Things that manages to show a bit of style and taste. And they serve great seafood and cold beer which is always a winner.

I’m also rather fond of the Big Prawn. Try to imagine a big prawn, in a big prawn cocktail with a truckload of shredded lettuce, a gallon of Thousand Island Dressing and a cocktail pitch-fork. Yum!

What we really need is some giant statues of a few famous Aussie icons in a prominent location. At one end of Bondi Beach we should erect a monument of Elle McPherson in a bikini and at the other end we could have Alf from Home and Away in a pair of budgie huggers and an Akubra.