The suspected killer of Sian O’Callaghan, Chris Halliwell, allegedly has a £150,000 bounty on his head and travellers are putting bets on the fact that he will never make it to trial.

The travellers are apparently linked to the Irish family of Sian O’Callaghan’s boyfriend Kevin Reape, reports The Sun. The community has stumped up the £150,000 as a reward for whoever gets their hands on suspected killer, Chris Halliwell.

“The Irish community have all got together to put this up. People have already been contacted in prison. Everyone wants to get him,” a friend of Kevin’s family told the newspaper.

“People say he deserves to die or would like to give him injuries he’d have for the rest of his life.” 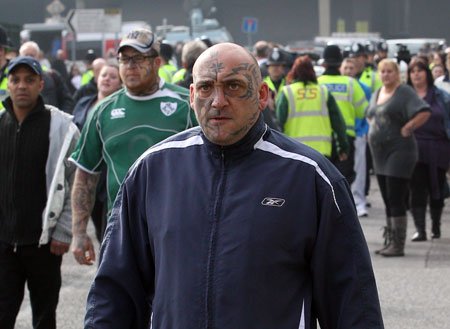 Protesters outside the Swindon court when Chris Halliwell arrived yesterday.

Yesterday, as Halliwell, 47, was driven to the court in Swindon for his remand hearing, the van was surrounded by angry protestors, one of whom shouted: “There’s 150 grand on your head.”

The body of 22-year-old O’Callaghan was discovered near Uffington, in Oxfordshire, last Thursday. She had been missing since leaving a nightclub in Swindon on her own in the early hours of March 19.

Sian’s boyfriend, Kevin Reape, raised the alarm after she failed to come home.

The remains of a second woman, allegedly killed by Halliwell, were found 15 miles away from O’Callaghan’s. However police have been unable to identify her. 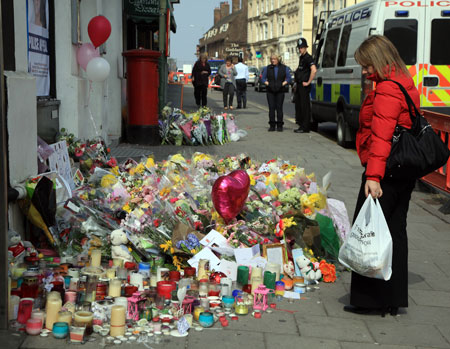 Tributes are left for Sian O’Callaghan in Swindon.

A spokesperson for the The National Policing Improvement Agency’s Missing Persons Bureau said:

“It’s difficult unless you have something to compare the dental records to.

“If you don’t know who you’re looking for, you are starting with a blank page.”

Chris Halliwell, 47, a taxi driver, has been charged with the murder of Sian O’Callaghan.

He is due to appear for a bail hearing at Bristol Crown Court today.

London’s sample sales: where to get cheap designer clothes