Broome and the Kimberley are the final frontier

I’ve always wondered what the point of a stubby-holder was. Okay, they’re a kitsch souvenir of a trip Down Under, but they’re not of any practical use, are they? Then I arrived in Broome. Order a beer here and it’s lukewarm before you’ve got the top off with your teeth – bottle openers are for wimps in the outback. It’s hot up here all year, so the fleece and trousers can be packed right at the bottom of your pack without being missed.

Broome nestles on Roebuck Bay, the Indian Ocean a mere 10-minute drive away. Established as a pearling settlement in the late 19th century, Broome was once supplying 75 per cent of the world’s pearling requirements. It was hazardous work though, and hundreds of Asian immigrants who worked on the boats lost their lives in diving accidents.

The day I arrive, I’m encouraged to go and see the Staircase to the Moon, a once-monthly phenomenon which occurs during a full moon between March and October.

The staircase is the reflective effect a full moon has on the mudflats at Town Beach, creating what looks like a series of steps leading up to the moon. It’s a great excuse for the whole of Broome to head out for the evening, an open-air market selling food, didges and all sorts of alternative goodies. 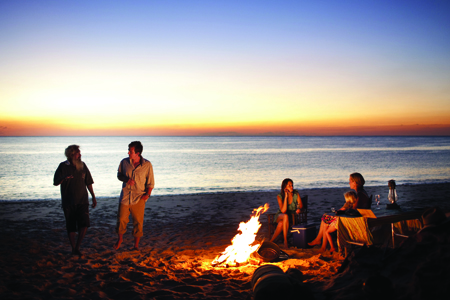 After watching an amazing moonrise, I decide to get a bit of yin and yang with a sunset over Cable Beach. It’s a place that has to be seen to be believed – no glossy picture can do this place justice. Not only is this stretch of coast regarded by seasoned travellers as one of the best beaches in the world, but the sunsets are legendary – a deep-gold sun shimmers on the horizon as it slowlydescens, dropping out of sight behind the expanses of the Indian Ocean.

And as if this isn’t enough to create a unique west coast experience, you can also take a camel ride along the beach. The hairy humpsters take you along the beach and time your ride so you get the best view in the house. Well, almost the best view – I leave the camels to the more adventurous and perch myself on a rock to wait for that perfect sundown photo opportunity. Tipped off by a local who tells me exactly where the camels will be when the sun hits the horizon,

I sit looking out to sea waiting for nature to take its course. Speaking of nature, you might catch the odd naked swimmer coming back up the beach after a dip, the area known for its enthusiastic nudists.

The sun goes down pretty damn quickly, so you have to make sure you’re quick on the shutter. I am suddenly surrounded by dozens of other photographers eager to get the same shot, so don’t be afraid to mix it up and stand your ground for a good position. In the end, getting the camels at sunset picture is a lot like bad sex. There’s a lot of anticipation, a bit of jostling for position, a few humps and then it’s all over. But just like pervy sex, it’s all worth it when you check out the pictures.

Broome is also the gateway to the Kimberley region, a rugged sun-scorched land, dotted with ancient gorges, weird looking boab trees and sprawling cattle stations. It’s three-times the size of the UK, but barely registers any detail on a map. It’s bordered by the turquoise waters of the Indian Ocean to the west, the humid top of the Northern Territory to the east, and the arid Great Sandy Desert to the south. It’s Australia at its most harsh and at its most diverse. And isolated: there are fewer then 50,000 people living in the Kimberley.

Most popular tours are 4WD safaris to Geikie, Windjana and Bell Gorges or the bumpy but rewarding drive up to Cape Leveque. Whichever one you choose, you’ll be sure to see things you won’t experience anywhere else in the world. Or, like me and my girlfriend, you can embark on your own road trip. We waited until the dry season to visit because tropical monsoons between November and April batter the land leaving some outback roads impassable. A few hours after leaving Broome in our 4WD, we reach the Gibb River Road, the famous outback track.

Free-roaming cattle, creek crossings and endless termite mounds keep us company. It’s a real event when you spot a truck passing the other way through the dust. After a chance encounter with a baby emu crossing the road, we camp at Windjana Gorge National Park. In the limestone ranges, we creep along the sandy edges of shallow pools, keeping an eye on the freshwater crocs sunning themselves just 20 metres away. As we listen to the squawking of exotic birds echo around the tall rock walls, I feel like I’m in an oasis.

Next is Tunnel Creek. In most parts of Australia, park walkways are usually rather tame. So we’re confused to find the recommended route here is finding your own way through a kilometre of pools, rocks, and bat poop in near darkness. Exhilarating stuff! A few hours later we get to Bell Gorge and I forget all about that. After a 20-minute walk down the cliffs, we’re swimming in waterfall-fed pools and relaxing on volcanic rocks. 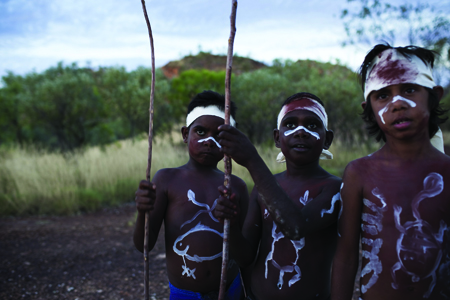 We next head north towards Cape Leveque at the tip of the Dampier Peninsula. All we know is that there’s unique accommodation available at the Aboriginal community-owned eco-resort, and that you definitely need a 4WD.

We almost lose control of the truck a number of times on the wide, uneven sand road, and can’t help feeling inadequate when we’re passed at 100km/hr by locals who give a carefree wave as they pass. We let our tyres down to drive on the beach to our “shelter”. We’re speechless when we realise our new home is just metres from the water and is but a thatched roof, picnic table and freshwater shower. We enjoy a cold beer while gazing out towards Indonesia. Then a swim, a sunset, a campfire, and staring at the stars.

In the morning, I open my eyes to the sun rising over the ocean. I’ve never experienced anything so beautiful. Feeling like we need to interact with the beauty that surrounds us, we book into a boat trip.

The boat ride doesn’t disappoint, because we’re lucky enough to have Denis join us. A year 12 student from the local One Arm Point Community, he tells us how he spends his spare time spear hunting fish and sea turtles. I can’t help but marvel at how different his life is to mine. Denis also tell us about another side of the Kimberley, how the stunning red cliffs are receding with severe weather, and about the intensive mining in the region.

On the long stretches of dusty road back towards Broome, I wonder about climate change, the state of the world, and just how sustainable a self-drive trip like ours is. I come to the conclusion that, maybe sooner rather than later, people’s experiences
of the Kimberley might be quite different to ours. What won’t change, however, is that a trip to the Kimberley will almost certainly be a trip of a lifetime. And remember your stubby holder – drinking warm beer in Broome will always be a very bad look.

Mountain biking in Nepal: Conquer the Himalayan route from Kathmandu to Pokhara

Snow That Blocked in the Whole Town