Wicketkeeper Prior was lucky but brilliant in his match and series-saving 110 not out to refuse victory for the hosts, who for all money dominated this match at Eden Park in Auckland.

Out of form Stuart Broad also put in an impressive rear-guard, breaking a Test record in taking 62 balls and 103 minutes to get off the mark and eat up valuable overs to help save the draw.

Prior’s innings included an LBW decision overturned on review (as did Broad), the ball hitting his stumps but not knocking off a bail, and going extraordinarily close to playing on, along with other close calls. 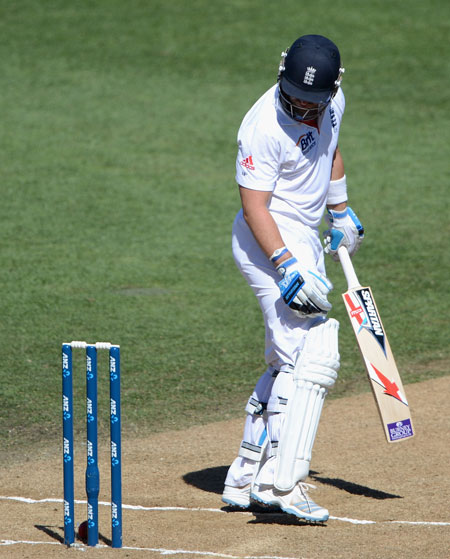 He reached his 100 shortly after he and Broad reached their 50 partnership – with Broad contributing zero runs to the pairing.

England became just the third team in Test cricket to survive a final day having started four wickets down.

Ian Bell was also key to ‘winning’ the draw, batting to the over before tea having earlier been dropped.

After a rampant New Zealand knocked over Broad and Anderson within three balls through Kane Williamson, Panesar was called upon to hold his nerve – and he did, although he was almost stupidly run out.

While the series ended in an agonising draw after two rain-ruined Tests, the points decision goes to the Black Caps.

The result means England hold their position above India in second place in ICC Test rankings.