Our online scribe, Coni Longden-Jefferson, (tntmagazine.com/coni) agreed to take part in a competition in which suitors would parade themselves – via blog – before her discerning eyes in the hope of winning a date. Coni chose TNT reader Clayton Breeds, and we whisked them off to the Grand Imperial in Victoria to see if sparks would fly. WORDS: FRANKIE MULLIN 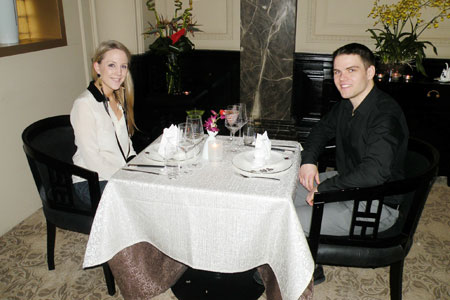 What she said: Coni

“I was dreading my date with Clayton as I’m terrified of awkward situations, but he put me at ease as soon as we met. His pictures don’t do him justice and I immediately thought that he had a lovely smile.

“I guessed he’d be worried about what to wear as he knows I’m into fashion, but he looked great – although I think he was still in his work clothes.

“We started by drinking cocktails and I was drunk by the time it came to dinner, which helped with the nerves. The food was amazing and, over dim sum and Peking duck, the conversation was easy, as I’m really inquisitive and Clayton’s led an interesting life.

“I think he was surprised I like serious conversation; he probably had a certain image of me because I’m blonde and write a blog about boys, but we talked about everything from politics to religion.

“I’d had a stressful day so the date went exactly how I’d hoped it would. Clayton was chatty and funny and the evening was easy. To be honest, though, I didn’t fancy him. He’s really nice – very together and mature – but, unfortunately, I like boys who are a bit off the rails. I usually end up with men who have loads of problems, no money and are generally a bit rubbish!” 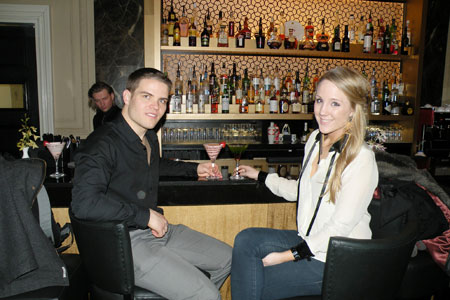 What he said: Clayton

“I love writing and I like Coni’s blog so I thought entering the competition was worth a shot.

“The day of the date was a disaster as I got home after work to find myself locked out and I couldn’t get hold of my flatmate. In the end, I had to buy some hair gel, spray on some smelly stuff at the counter of a department store and get ready in the toilet. And I was nervous enough already!

“As soon as Coni walked in and said hello, we had a rapport. She wanted to hear more about what I’d written in my blog (tntmagazine.com/clayton), and I admitted to having lived on a boat. Luckily, Coni’s interested in travel, which is a big hobby of mine, so there was plenty to talk about.

“We had a drink and started chatting to the barman; I was impressed when Coni guessed he was Lithuanian. We then moved into a private dining room, where we had dinner. The food was delicious – we ate so much I thought I’d have to be rolled out – and the company wasn’t bad either!

“Coni was different from how I’d expected her to be. People I’ve known before who work in fashion have tended to be a bit stuck-up and shallow, but Coni was not like that at all. I was really enjoying myself and found her witty, intelligent and attractive.

“The conversation flowed, but I wasn’t picking up much in the way of chemistry. We said our goodbyes and it wasn’t overly romantic. Coni told me to add her a friend on Facebook, but she didn’t give me her number and we didn’t kiss.”

Chemistry: 3/5
Conversation: 4.5/5
Would you see her again: Yes, but somewhere casual.

Other traveller reviews on Poland

Surfs up away from home :)