The fellas at Bloc show how summer should be done with this, their first London-based bash after their Butlins-set weekenders, and they’ve orchestrated one hell of a line-up of new, established and underground talent. Straddling genres to incorporate everything from experimental psych-rock and hip hop, to dubstep and techno legends, the bill is marked by its diversity. Snoop Dogg brings his ho-bashing raps to the Friday night as mainstage headliner, supported by Richie Hawtin and Steve Reich. Snoop’s lyrics might not be politically correct, or palatable to the reasonable, but he knows how to work the crowd.

Taking up residency in the London Pleasure Gardens, Bloc has found itself a venue whose character matches that of its acts. Set in 60,000sqm of waterside docklands, with a backdrop of the towering warehouse blocks that used to mark this formerly industrial area of London, the Gardens will boast a 30m geodesic dome, the majestic Hub stage from Glastonbury and an audio-video experience with imposing installations, that make the setting as much of a performer as the stage-bound musical acts.

This three-day dance fest in Cheshire has a kaleidoscopic line-up that runs from tech and house to trance and upstart dubstep oiks – and everything, and everyone, in between. David Guetta, Deadmau5, Calvin Harris and Tiesto perform alongside LA‘s Skrillex, Sub Focus, Example, Andy C and Erol Alkan. There’s something to keep you dancing all weekend, the hardcore among you taking it all in in one go.

He was once scary, upsetting the funless Stateside with his goth-shock act; then his rock institution placement saw the outrage factor dim. The man christened Brian is back now, with album nine, Born Villain. Whether you’re dedicated to wearing black all year round or not, his live show is a spectacle worth catching.

Hyde Park is taken over by pop and dance this weekend as the big-eared Deadmau5 brings his electro-techno to town on Friday and hop-hop and r ‘n’ b star Drake headlines Saturday with a rare London show. Pop superstar Rihanna brings this massively fun party to a close on the Sunday night. The Roots, Nero and Jessie J are among the support. Please don’t stop the music. 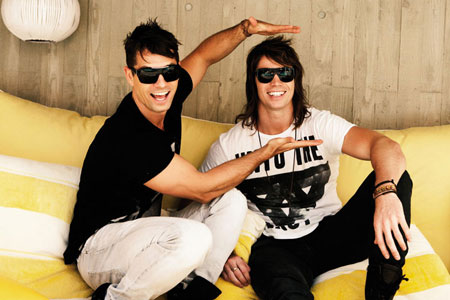 This 21-piece alternative all-female choir are something unique. Marshalled by chief gaggler Deborah Coughlin, the troupe is abrasive and loaded with attitude, their songs focusing on “being honest about things from a female perspective”. New album From The Mouth Of The Cave is out now, too.

Ibiza’s Circo Loco resident Clive Henry and Camden-born Leroy, who’s quickly establishing himself as one of the capital’s most up-and-coming DJs, headline this tech-house party in north London. Toast Underground residents Steve Kurz and Ian Grimwood join the line-up for a night of true underground sounds.

The Aussie DJ duo (pictured) hit south London’s club lynchpin for this, one-night-only show. Having toured the world (last year they headlined 35 shows across three continents), played at the most prestigious clubs and become a festival- scene mainstay, siblings Matt and Chris are headed for the very top.

Canadian electro-tech star Deadmau5’s label Mau5trap hosts its first warehouse party in the capital, with NOISIA headlining, along with rap-dance group Foreign Beggars, Bare Noize, Tommy Trash, The Frederick, Koven, Slugz and Boyson and Klose One, who’re but a handful of the names on this impressive bill.