Bogan pride: Bogan Bingo, one of the best nights out in London

And with that, Bogan Bingo kicks off. Ocker-as-they-come callers Tim and Trev, decked out in cut-off jean shorts and flip-flops, emerge to Poison’s Ain’t Nothing But A Good Time and the howls of an audience hungry for action.

As with each weekly installment of Bogan Bingo, Clapham’s The Underdog bar is heaving, an up-for-it crowd of predominantly Aussies and Kiwis, but featuring a good number of Brits, champing at the bit for a dose of bogan.

They’re not disappointed. Tim quickly get his balls (his bingo ones) into action, as Trev darts to and from the mic, his weird asides the perfect foil for his mate’s witty banter.

Within seconds, the smut is flowing. “44: on all fours … bitch”; “16: never been kissed – bullshit!”; “69: a dinner for two”. The crowd loves it, cheering, high-fiving and roaring along to the classic rock songs that accompany many of the ball drops. 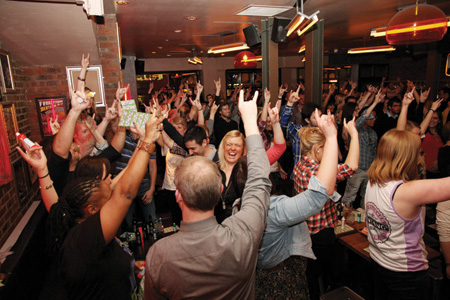 When “Number six: show us your tits” is called, there’s free beer at the bar for any girl game enough to provide a little breast action. Although one plucky lass, standing up on her seat, teases by pulling her bra down, there’s no takers. Boos all round.

“I saw a bit of nipple,” Tim says delightedly. “That’s worth a shandy.” The crowd goes wild. Again.

Bogans are so hot right now. Earlier this year, they were added to the Oxford English Dictionary, and Tim and Trev’s show, started in London in 2008, has been phenomenally popular, selling out for a year. How things have changed.

“‘Bogan’ is a term of endearment now,” Trev explains later. “Before, you could find offence in being called that. Now, ‘bogan’ is more a way of life, a personality trait. You don’t have to be a bogan all the time, but, usually after a few beers, everyone’s got a bit of bogan in them.” 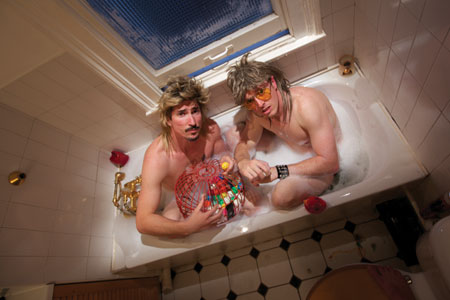 That lurking inner-bogan has been worked into a rollicking show perhaps best described as ‘controlled carnage’, the sort that attracted the curators of the Edinburgh Fringe Festival, where the boys take their show this month.

“We’ve created mayhem in a pub,” Trev says proudly. “We feel we give people a licence to be a little bit stupid, not take themselves so seriously. It’s a good, unpretentious night out.”

Back at The Underdog, everyone’s merry. More numbers tumble from Tim’s tongue, accompanied by more classic rock and a healthy dose of dry ice, until someone manages to stand up, grab their crotch, raise their devil horns into the air and yell, “Bloody Bingo”.

Simon, an Aussie, makes his way to the front to the sound of Johnny Cash’s I Walk The Line. “Hi, Simon,” the crowd chants. “Go get fucked, Simon.”

Simon’s won the night’s top and second-most sought-after prize: a £1500 Stoke Travel voucher (a photo of a panda on a slide is the reward everyone secretly covets). He performs a little victory dance as the pub belts out: “There was a farmer had a dog, and Bingo was his name-o. B-I-N-G-O!”

An hour later, outside The Underdog, a well-dressed British girl stumbles from the pub, singing John Mellencamp’s Hurts So Good to herself. She looks well pleased. I guess Trev’s right. There really is a little bit of bogan in all of us.