Sex, drugs and bikinis – is Bollywood pulling out all the stops to take on Hollywood and crack the mainstream?

Once upon a time you knew where you stood with a Bollywood film. Set in an exotic locale, the storyline invariably involved a gorgeous guy and gal making goo-goo eyes at each in what would play out as an innocent love story, aided by plenty of OTT singing and dancing. It made a nice change from Hollywood.

But the racy trailer for upcoming high-octane Bollywood flick Dum Maaro Dum – with the words “Sex” “Death” “Ketamine” and “Cocaine” flashing up on the screen for titillating effect – would suggest that these days Bollywood wants a piece of the mainstream action.

Bollywood, effectively India’s answer to Hollywood, churns out thousands of movies each year. Granted, not all of them are cheesy romantic musicals; some are hard-hitting crime dramas examining Mumbai’s seedy underworld, but the fact remains that Bollywood is still largely a niche market in the UK.

But in recent years Bollywood appears to have been angling more and more for the mainstream in the UK and US.

In 2010, My Name Is Khan came along with the very un-Bollywood sounding tagline “And I am not a terrorist” and an equally un-Bollywood plotline involving US homeland security and terrorism.

Starring the dishy Indian superstar  Shah Rukh Khan, it was distributed by Twentieth Century Fox, the same studio backing Dum Maaro Dum. While it didn’t quite crossover into the mainstream, it broke box office records in the UK for a Bollywood film.

“I’m not convinced Bollywood is reaching out to a wider audience, certainly not in the UK,” says Andrew Turner, sales director at Twentieth Century Fox. 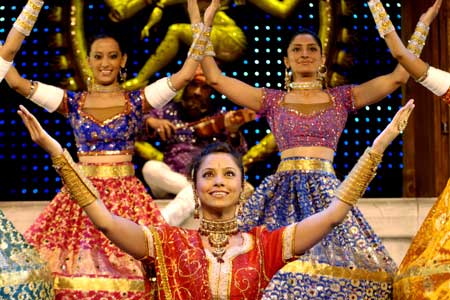 “What has changed in the UK is the wider selection of genre of Bollywood film now being offered and embraced by Bollywood audiences. Historically, successful Bollywood films were three hours long and rom-coms with several singing and dancing sequences,” he says.

“We now have, in addition to these, all genres, including horror, drama, action and thrillers, also delivering respectable grosses at the box office.”

However, senior lecturer in screen studies at the University of Manchester and author of Bollywood: Sociology Goes To The Movies, Dr Rajinder Dudrah believes Indian cinema has been vying for new audiences for “at least over a decade”, and says what we are seeing now is not just the Westernisation of Bollywood but the use of social media to reach new fans.

“All the Bollywood A-listers, the key stars of Dum Maaro Dum, Bipasha Basu and Abhishek Bachchan, for instance, are on Twitter 24/7,” he says.

“It’s partly to be quirky and let emotion out but it’s also allows them to network their new projects.”

One thing’s for sure: the more Bollywood films adopt a more “western” aesthetic, the more they have the potential to alienate traditional fans.

According to Bollywoodworld.com Dum Maaro Dum is already upsetting locals and lawmakers in Goa, where the film is set, for its portrayal of the narcotics mafia and prostitution with one tourism trade official saying “the film could have bad repercussion for tourism in Goa”. 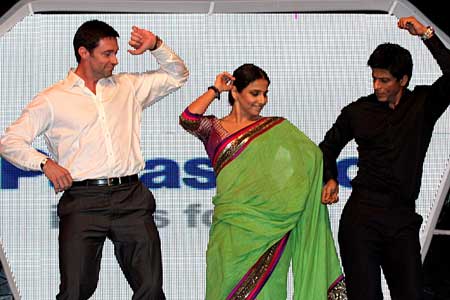 But the film’s director Rohan Sippy told IANS that it was not his intention to “show Goa in a bad light” and said the city was just a “fictional character.”

But if proof is still needed that Bollywood is moving towards the mainstream, then Hugh Jackman provides it. At a film convention in Mumbai, the Aussie star let slip that he is keen to act in Bollywood films and is “meeting directors.” Then, as if to underline his credentials he took part in some Hindi dancing with the aforementioned heartthrob Shah Rukh Khan.

The Wolverine star would be the perfect actor to take Bollywood to the masses;
the all-singing all-dancing hunk is practically Hollywood’s answer to Shah Rukh Khan, anyway. We can’t wait to see him strutting his stuff in a dhoti sherwani sometime soon.

Who’s Who of Bollywood

Anil Kapoor
Arguably the biggest star in Bollywood in the late 80s and early 90s, Kapoor starred as the game-show host in Slumdog Millionaire.

Shah Rukh Khan
Bollywood’s answer to George Clooney, SRK was named by Newsweek magazine in 2008 as one of the 50 most powerful people in the world.

Aishwarya Rai
This gorgeous onetime Miss World has starred in some of Bollywood biggest films, from the epic family drama Devdas to the Jane Austen adaptation Bride & Prejudice.

Amitabh Bachchan
A cinema titan, Bachchan first gained popularity in the early 1970s as the “angry young man” of Bollywood and is one of the few Indian stars to have his wax replica at Madame Tussauds.

What’s going on this Australia Day

Artists to light up the River Thames bridge at night