Bonfire (Guy Fawkes) Night: Where to watch and what it is

Bonfire Night is a big deal in Britain. Why? And where is
the best place to celebrate?

The History of Guy
Fawkes Night

In 1603 Catholics in England had long been facing
persecution, so when James I took the throne, they were hoping for a more
favourable ruler. However, James I was unsympathetic to Catholicism and it was
decided to respond with violent action.

Thirteen men got together and conspired to blow up the
Houses of Parliament on November 5, hoping to take down the king and as many
members of parliament as possible.

Allegedly, however, some of the conspirators had second
thoughts and word of the plot leaked out.

In the early hours of November 5, soldiers stormed in to the
Houses of Parliament to find Guy Fawkes alone with the 36 barrels of gunpowder.
Not so easy to talk yourself out of.

Fawkes was taken to the Tower of London, tortured and
executed as bonfires were lit across the city to celebrate the safety of the
king.

The tradition continues today and is celebrated with burning
effigies of Guy Fawkes and the setting off fireworks.

Where to Celebrate
Bonfire Night

Bonfire night is a good chance to join in a uniquely British
tradition. Here’s our pick of the best.

Bonfire night and fireworks in London

Southwark Park – free fireworks display starting at 7 p.m. A
hodgepodge of drink and food will also be for sale.

Clapham Common – one of the best shows of the weekend and
there are plenty of pubs and bars in the areas to catch a drink afterward.  Fireworks at 7:30 pm and admission is
free.

Butterflysocial’s Alternative Bonfire Night Party – Get out of the cold and see indoor fireworks at The Brill near King’s Cross. Sip on firework-themed cocktails and meet some singletons too. Entry is £5 and booking is essential.

Battersea Park – fireworks and a licensed bar will also be
open in the park. Admission is £6 and the show starts at 8 pm.

Southgate – fireworks covered for North Londoners; the show
also starts at 8 pm and mulled wine and food stands will be open to keep you
warm.

Ravenscourt Park – this is West London’s biggest bonfire
gathering of the night and there is also a funfair and food stalls. The main
show is at 8 pm and entry is £4 advance entry, £6 that night.

Folk and Fireworks – The party at Master Shipwright’s Palace
includes performances by folkies Spiro, The City Shanty Band, Lady Woodsman as
well as lectures on Guy Fawkes, storytelling, food, bonfires and of course,
fireworks. Tickets are £15 or £10 in advance and the event starts at 4pm.

Victoria Park Fireworks – The dramatic fireworks show is
done up by pyrotechnic expert Walk the Plank and will commemorate the 70th
anniversary of the Blitz. Admission is free, show starts at 7:30 pm.

Richmond Fireworks Display – A local favourite, the show has
mulled wine and a hog roast to nom on during the spectacular choreographed
fireworks. It starts at 7 pm and tickets for adults are £10.

The Lord Mayors Show Fireworks Display – the show also
includes a lively parade along the River Thames, between Waterloo Bridge and
Blackfriars Bridge. 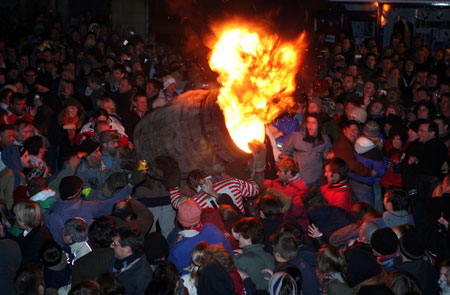 If you fancy a daytrip, towns and cities outside of London
are chock-full of traditional bonfire activities.

Ottery St Mary in Devon – On November 5, barrels soaked with
tar are lit and carried on peoples’ backs down the streets. A tradition dating
back to the 17th century, when the barrels were believed to ward away evil
spirits.

Leeds Castle will have a fireworks spectacular November 6
and 7. It’s known as one of the best displays in the country. The show is set
to famous film scores, making it a full-fledged show.

Battle Bonfire – In Hastings there will be a fireworks
extravaganza as well as a torch-lit procession, a marching band and an enormous
bonfire. See it on November 7.

Eating and drinking in Oxford

Desert holidays: five of the best