The Labour party filed a formal complaint yesterday after Johnson took the @MayorofLondon account, which has nearly 250,000 followers, and added a link to backboris2012.com. He also renamed the account @borisjohnson. 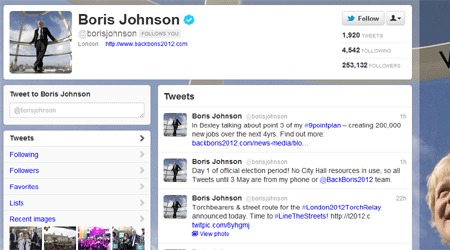 Under pressure from political opponents the account has since been changed back to the original name and the link to Boris’s re-election campaign has been removed.

A member of Ken Livingstone’s election team complained by saying “Basically taxpayers money has been spent to build up and maintain a feed that Boris has now hijacked. To compare like with like, the No 10 Twitter feed was set up under Gordon Brown but has stayed as an official feed since Cameron took over.”

Is Boris Johnson so inept at drumming up support he needs to hijack @MayorOfLondon? Cheap trick, #handitbackboris

A spokesman for Johnson’s campaign last night said that they would stand by the decision, although there seems to have since been a u-turn.

“Boris has been completely transparent about changing the Twitter name and since it has changed we have seen a surge in followers despite followers being free to unfollow at any time.”

A newly revised statement on the Back Boris website now states that Johnson “did not expect this openness and honesty to have created such hysteria. So in case there is even one Londoner who has a problem with what he did, he will not use that account for the campaign and instead can be followed from the political front on @BackBoris2012.”

Virgin: the return of the Grail UK tour

Aussie travellers to arrive from Bangkok