There was chaos as blood and broken glass was strewn across the road. Runners and spectators were rushed to hospital, some with missing limbs. CNN reported ‘at least 17 in critical condition and 25 in serious condition.’

An eight-year-old boy was among the confirmed dead, and several more children are being treated for injuries at Boston Children’s Hospital.

“There was blood everywhere; there were victims being carried out on stretchers. I saw someone lose their leg. People are crying,” said  Steve Silva, a sports producer for Boston.com who was covering the race.

The two explosions happened after 2.50pm ET, after the professional runners had already passed the finish line. Reuters has reported that they were detonated with gunpower and contained ball bearings and shrapnel to maximise the devastation. 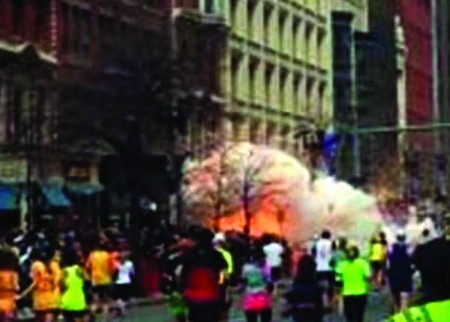 35-year old state trooper Roupen Bastajian from Rhode Island recounted the severity of some of the injured to Sky News “I started running toward the blast. And there were people all over the floor,” he said. “We started grabbing tourniquets and started tying legs. A lot of people amputated. … At least 25 to 30 people have at least one leg missing, or an ankle missing, or two legs missing.”

“We will turn every rock over to find the people who were responsible for this,” said Boston’s Police Commissioner Edward F. Davies.

“We still do not know who did this or why. And people shouldn’t jump to conclusions before we have all the facts,” President Obama told reporters last night during a press conference at the White House “But make no mistake, we will get to the bottom of this…Any responsible individuals, any responsible groups will feel the full weight of justice.”

The New York Post reported that a 20-year-old Saudi Arabian man was under police guard in an unidentified Boston hospital as a ‘person of interest’ and was suffering from severe burns. Boston Police have not yet confirmed this rumour.

The Post also reported that there had been a third explosion at the John F. Kennedy Presidential Library and Museum, America’s official memorial to President Kennedy, situated near the University of Massachusetts in Boston.

The Boston Marathon is the world’s oldest marathon event and was first held in 1897. It attracts half a million spectators in the city every year and around 27,000 participating runners.

Image via Getty
Videos via The Boston Globe & CNN