Brazil: From Rio de Janeiro to the Iguazu Falls

Discover Brazil, from Rio de Janeiro, down the Costa Verde to the Iguazu Falls Words. TNT’S Tom Sturrock soaked it up.

Outside the stadium, Rio’s Estádio São Januário, the party starts early. Even before the sun goes down the streets alongside teem with vendors hawking merchandise, food and booze.

Tonight, Rio’s CR Vasco da Gama – known simply as Vasco – are taking on Santos, from São Paulo in the Brazilian Série A, and the home fans are already descending on the stadium, cloaked in black and white flags, the rising beat of their drums matching the heightening anticipation ahead of kick-off.

Inside, it’s standing room only – broad, flat concrete benches run unbroken around the stadium. By the time the teams appear, the stands are a seething mass, the visiting fans judiciously allocated seats at the opposite end to the Vasco hard core.

The drums never stop beating but as the home side appears, a roar erupts and the drums beat louder and faster.

And then, out come Santos, their appearance drawing the Vasco contingent to their feet as one; they greet their opposition with a kind of military salute and the exhortation, in Portuguese, to: “Fuck your mother! Fuck your mother!” 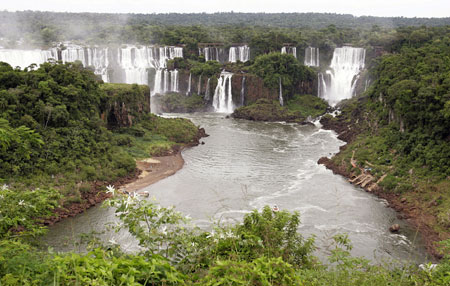 “The Iguazu have featured in many films,” Edoardo, our guide, explains. “Moonraker, Miami Vice – and in Indiana Jones And The Kingdom Of The Crystal Skull. They made a mistake in that film, though – apart from having aliens in it, they also said the Falls were in the Amazon.”

Indeed, the Iguazu Falls are not in the Amazon; they straddle the Brazilian and Argentinian border. The surrounding landscape is a lush green carpet, thick with jungle, torn apart at its central seam by the ballistic churn of several separate falls spuming into one shared basin.

Below, boats loaded with sightseers forge boldly towards the falls, but only get so far before they reach a friction point and are tossed contemptuously back into the foam.

At the largest of the area’s falls, Garganto do Diabo, or the Devil’s Throat, the bottom of the falls are not even visible, obscured by roiling tongues of mist and foam, a mixture of whitewash and oblivion.

The noise is ever-present – a ferocious, gushing white noise, like the sound you hear between your ears when dumped by a big wave.

Abseiling against this backdrop, with falls churning either side, might not seem like the smartest move, but it’s a once-in-a-lifetime chance. So I strap in and cautiously reverse over the edge of a small platform that juts out from the undergrowth.

The first steps out into thin air are alien – like missing a step in the dark – but the rope, thankfully, holds fast as I descend, like Orpheus into the underworld, the 30ft drop back to terra firma below.

The failing light catches the dust kicked up by a gaggle of kids playing football on a worn pitch in the shadows of Paraty’s terracotta streetscape. One of the kids overshoots his target and the ball bounces in my direction; the pressure’s on, but I manage to hoof it back in their direction – not my best work, but not disastrous.

Paraty is a colonial town set at the foot of the mountains that line Brazil’s Costa Verde. As I head into the Old Town, the cobbled streets grow steadily busier. In small corner bars, old, barrel-chested men recline in deckchairs, sipping cachaça.

In the heart of the Old Town, the air hums with salsa and folk music; the wheeze of an accordion drifts up from the far end of a street flush with bars.

In one, I find myself trying out some pigeon Spanish on an accommodating barman named Hugo, who, luckily for both of us, speaks excellent English.

After two of three serves of the finest local cachaça, discussion turns to regional vulgarities; the more colourful, the better. Hugo insists that the nastiest thing you can call a woman is, “Gallina de penard”, or “a chicken with no feathers”. In Brazil, chicken has a double meaning, referring also to a woman who is perhaps too generous with her favours.

“But I don’t recommend you to say it to any girls around here.” 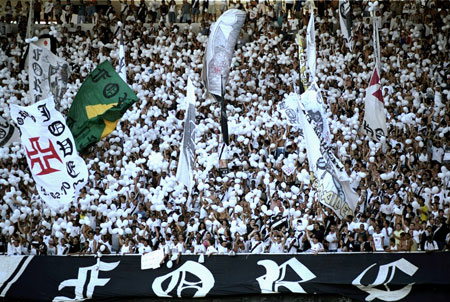 Back at Estádio São Januário, the drama runs high. The visiting Vasco scored the opening goal of the match, which was not looked upon kindly by the home fans. Fortunately, though, an equaliser comes before half-time. The second half is a more dour affair but the chanting supporters do not seem to notice.

In the dying minutes, Santos’ attempt to pinch a winning goal falls agonisingly short, allowing Vasco to mount a lightning counter-attack. With crisp precision, the ball sets the back of the net bulging. Vasco win 2-1, and the true believers head out into the warm Rio de Janeiro night singing more loudly than ever.

WHEN TO GO: It’s hard to go wrong with Brazil, although spring or autumn are best if you want to avoid serious heat and the biggest crowds.
GETTING THERE: Rio de Janeiro has flights landing all th time.
GETTING AROUND: You can get around most of the smaller towns on foot but for travelling around in Brazil, you’ll need to take buses or coaches. They’re reliable and fairly cheap, but you need to be organised.
VISAS: Nationals of the EU and New Zealand do not need tourist visas, but Aussies do.
CURRENCY: Brazilian Real. 1 GBP = 2.75 BRL.
LANGUAGE: Portuguese.
GOING OUT: You’ll find beers for 5 or 6 real.
ACCOMMODATION: There are hostels for maybe 25 to 30 real per night. Hotels are obviously more expensive, but outside Rio, prices drop.
SEE: braziltravelinformation.com.

» Tom Sturrock went on the 17-day Buenos Aires to Rio Unplugged tour with Intrepid Travel (0203 147 7777; intrepidtravel.com). From £1340 – includes transport, some meals and accommodation.

check out the Czech giant mountains