The pair, separated in age by 40 years, had given marriage counselling a go but it hasn’t done the trick.

Geoffrey, meanwhile, has recently filed for bankruptcy in the US a day before a court case over his assets based there which include the fashion label responsible for some of what Brynne wears on red carpets and at race days.

Brynne continues to live in their Melbourne penthouse. 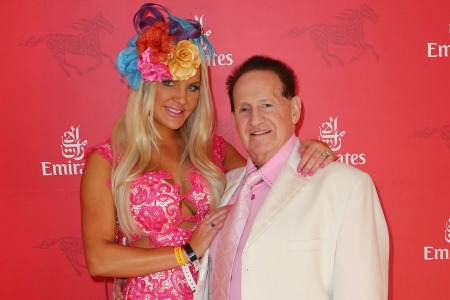 The 30-year-old former cocktail waitress from the US has made a name for herself as Geoffrey’s wife, an outlandish fashion enthusiast and on reality TV.

She was eliminated fifth on the 2011 series of Dancing With The Stars, had her own Kardashianish show Brynne: My Bedazzled Life and last year was cast in Celebrity Slash.

Mr Edelsten apparently tried to woo an American woman online and showered her with gifts on a trip to Florida – she blabbed to reporters though.