The fast food giant found ‘very small trace levels’ of horse DNA in its British and Irish-bound burgers and said it would end its contract with Ireland’s Silvercrest plant.

After insisting it was not affected by the fast food ‘Horsegate’ scandal, Burger King dumped millions of beefburgers.

The chain attempted to distance themselves from the recent scandal – “Burger King Worldwide has been given absolute assurance by its supplier ABP/Silvercrest that no Burger King products are affected by the issue.” said Anna Price of BK’s PR firm Cohn & Wolfe on January 16th, 2013.

But they were forced to make a similar move to Tesco, whose beef burgers were also contaminated with horse meat traced to a European supplier. Burger King ran a full page ad in major UK newspapers today  stating: “Our supplier has failed us and in turn we have failed you. We are committed to ensuring that this does not happen again.” 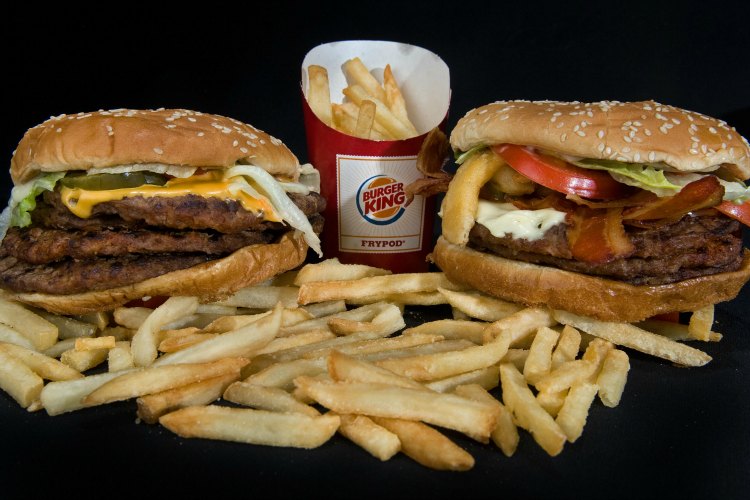 Tuck in: Burger King’s hefty Quad Stacker, launch in the USA in 2009 (Getty)

The meat is thought to have originated from large frozen blocks imported from Poland.

In an official statement, the global fast food restaurant said:
“Our independent DNA test results on product taken from restaurants were negative for any equine DNA. However, four samples recently taken from the Silvercrest plant have shown the presence of very small trace levels of equine DNA.

“Within the last 36 hours, we have established that Silvercrest used a small percentage of beef imported from a non-approved supplier in Poland. They promised to deliver 100% British and Irish beef patties and have not done so. This is a clear violation of our specifications, and we have terminated our relationship with them.”

McDonald’s have hit back at their rivals by publishing ads in today’s papers reassuring customers “B is for the 100% British & Irish beef in our burgers.”

According to evidence uncovered by an investigation which was presented to MPs last week, the contamination of burger meat supplied to a wide range of UK retailers and restaurants, the contamination with horsemeat has been going on since at least May 2012, possibly earlier.

Turqoise Nails will just finish my outfit off at Glastonbury Festival

Harry’s back but Grella’s in doubt

Mortals meet the pros at live poker festival in London