“Seriously, every travel article I read about San Diego ends like that. I’m sure you’ll be more imaginative.” Shit. There goes my closing line.

Heidi is a local who is treating me to dinner at one of San Diego’s best gastro pubs, so I owe it to her to go beyond Ron Burgundy for inspiration.

Poor old San Diego; in many ways it’s had to put up with being the runt of California’s litter.

While liberal, landmark-rich San Fran and glam, celeb-saturated LA have hogged the limelight, San Diego has long been best known as a slightly insalubrious military town and annual gathering place for the socially inept (the city hosts Comic-Con every year). 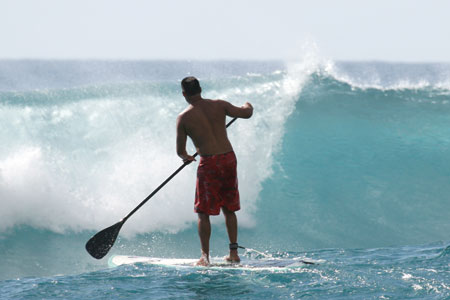 But in recent years California’s second-largest city has been assembling a far more appealing reputation for itself. T

hanks to the celebrated list of microbreweries and nanobreweries based in San Diego, plus the fact that the World Beer Cup – which pits the planet’s best brews against each other – takes place here, it is widely labelled ‘America’s craft beer capital’.

‘What does America know about beer?’ I hear you snort. But you’d be dead wrong to dismiss the US as a nation of Bud-swilling beer philistines.

The ever-spreading fad for going local – the likes of ‘farm-to-table’ and ‘artisan’ are inescapable when confronting a menu in the US – has twined its tendrils around food and drink, paving the way for a lengthy catalogue of brews to rival even those of Belgium.

And while in the UK, beer geekery tends to conjure images of beardy blokes in socks and sandals, in the US, it’s very much the territory of cutting-edge cool.

Never is this more apparent than in Little Italy’s Craft & Commerce, where Heidi has brought me. A low-lit, book-lined bolthole – in which the soundtrack of a posh Brit narrating a novel accompanies a visit to the loo – I’m seated facing a wall lined with at least 20 local beers on tap. 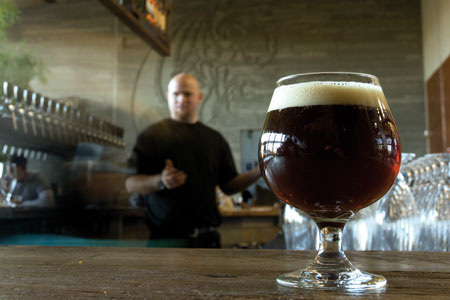 Coming off as every inch the Californian, with her gold-blonde hair, peppy temperament and habit of prefixing every adjective with the word “super”, Summer isn’t your archetypal ale-chugger.

But you won’t find a more enthusiastic proponent of the San Diego beer scene. Over a curry stout at Ballast Point’s brewery, the first stop on the tour, she tells me: “You could drink a different beer every day and never catch up. There are 20 to 40 styles coming from each brewery in the area per year.”

Resultantly, beer tourism is a growing industry – hence Summer’s Brew Hop business. And it’s a different prospect from tasting the fruits of Europe’s older brewing traditions, most notably in Germany and Belgium.

The scene in San Diego is more “experimental”, Ballast’s head brewer Yuseff Cherney tells me. Just think back to that curry stout.

The next stop on our frothy odyssey is Stone World Bistro and Gardens – or “Disneyland for beer drinkers,” as Stone Brewing Company’s Randy Clemens calls it.

As it offers 37 varieties of draught beer and 125 of bottled, a food menu boasting ingredients such as Stone Smoked Porter and garlic beer cheese, and sweatshirts emblazoned with the moniker of one of the brewery’s best-loved ales, Arrogant Bastard, there’s little room to disagree.

“[CEO] Greg has delusions of grandeur that would make Napoleon blush,” Randy half-jokes.

“His motto is ‘act now, think later’.” For that reason, the owners are in the midst of building the brewery’s first boutique hotel.

Looking about the bistro’s sun-soaked gardens with a glass of Stone’s obscenely silky Imperial Russian Stout in hand, I can’t think of a better idea for a getaway. 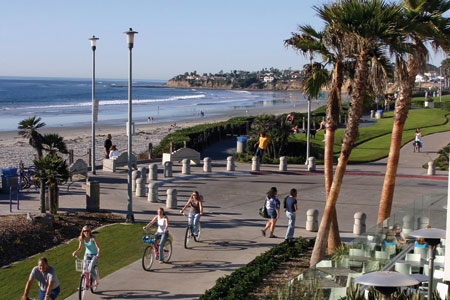 “Fucking wanker! One-on-one! Come on, one-on-one!” It’s 7pm on a Sunday, and I’ve been watching scenes more akin to Newcastle on a Saturday night unfold in San Diego’s Gaslamp Quarter.

Outside Stingaree, a club famous for rooftop pool parties, a British tourist has clearly been hitting the booze hard and is now looking for someone to hurt. Not that the American partygoers are much better behaved.

Inside, as girls dressed in nothing more than bikinis and ankle-breaking wedges dance around the darkened interior, a vacant-eyed shirtless man stumbles into the ladies’ toilets.

Perhaps I shouldn’t have expected anything less of San Diego’s party district, although I am visiting on the weekend of Cinqo de Mayo, which rowdily commemorates a Mexican victory of the 1800s.

That might explain the ramped-up atmosphere (still, Heidi did tell me of the legend “Sunday fun day” in the Gaslamp).

San Diego was part of the newly independent Mexico in 1821 and it took a few decades for the US to reclaim it; the city is just a 20-minute drive from the Mexican border.

The influence of its neighbour is keenly felt, therefore, most happily in the food – fish tacos and breakfast burritos are San Diego staples.

The rejuvenated Downtown area has played a huge part in making San Diego more sexy, a fizz it had lacked thanks to dour military associations (the city is host to the largest naval fleet in the world).

In the 1880s, the Gaslamp Quarter was a red-light district riddled with prostitutes and gamblers. Even renowned gunman Wyatt Earp ran gambling halls here.

The Gaslamp is at odds with the rest of San Diego, however.

While there are examples of a more stereotypical Californian energy – the ‘see and be seen’ clubs; women ‘walking’ their dogs in strollers; eccentric vignettes, such as when I see a hard-body being pulled along on a skateboard by his dog, only to hit the kerb and do a somersault when the mutt dashes off, so that he is then harangued about his dangerous conduct by an angry tarot-card reader – San Diego is better known for its ‘retro California’ vibe. 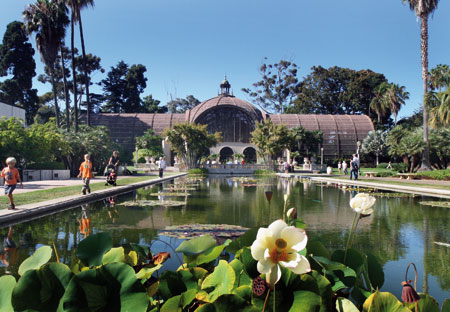 “You are an Indian warrior princess,” my instructor, Izzy, soothes, rather imaginatively. Standing up on my long board, paddling the Pacific’s still waters with big, sweeping strokes, I can almost picture myself as a kick-ass chick striking out across the ocean – well, if I didn’t feel nervous as hell.

Blame the part of the disclaimer I just signed absolving surf school Surf Divas of all responsibility should I die from contact with a ‘carnivorous creature’.

A couple of dolphins just tipped their fins to say hello, so now I’m searching the waves for signs of a more sinister dorsal.

“Don’t worry,” Izzy says, nodding towards a swimmer further out than we are. “If there are any sharks, they’ll go for him.”

We’re in much deeper than the surfers, who’ve been hard at it since even before I opened my curtains at 8am and spotted clusters of them catching waves along the coast.

This is my first attempt at stand-up paddleboarding, so I need flat water to get a feel for it; there is, however, a more proficient SUP-er deftly navigating the surf closer to shore.

SUP is the fastest-growing sport in the US today. An ancient Hawaiian form of surfing, it’s attracting a wider range of disciples than its paddleless relative, probably because it’s easier to learn (I stand tall on my first try) and there’s no need to schedule sessions around high and low tides.

It also provides a strong core workout – the balancing act coupled with paddling leaves me with no choice but to stay taut – and can be more versatile, as you are able to catch more waves in a set.

Even better, the board is so long that  Izzy also fits on it and catches some waves for me as we head back towards the sand. 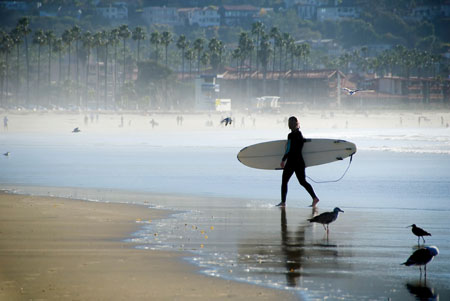 Back in Craft & Commerce, Heidi tells me that “there’s just a very laidback mentality here – people come from LA to San Diego to chill”.

I feel this ‘vacation vibe’ first-hand after my SUP session, when I rent a bike and ride the boardwalk along Pacific and Mission beaches.

Both are young, beautiful and filled with the bumming around – I feel like I’m on a movie set watching the washboard stomachs rollerblade by. Further down at Ocean Beach, there’s a more hippy feel; shabby bungalows with surfboards stuck in their windows decorate the seafront.

I breathe in the typical San Diego day of blue skies and sunshine (the last time snow fell here, it was 1987), then notice the tiny corner shop I’m headed for claims to stock 250 kinds of craft beer.

No wonder this city’s sensibility is so mellow – with great beaches, great beer, and great bodies, the California dream is being lived right here.

So I’ll refrain from telling you to stay classy, San Diego. You just crack open some brews and be chill. 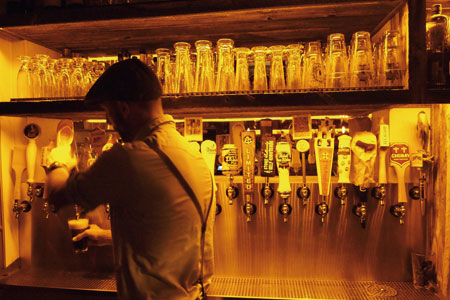 In Downtown, East Village is more local than the touristy Gaslamp Quarter, with Neighborhood a favourite hangout. While a great little brewpub in its own right, offering almost 30 beers on tap and bottled brews from local heroes including Alesmith and Greenflash, try getting into its hidden speakeasy, Noble Experiment.

This small cocktail bar is concealed behind what looks like a wall of beer kegs by the bathrooms. neighborhoodsd.com

Celebrated for its sausages, The Linkery also has a huge blackboard of ales and handily serves up samplers, which means you can try an array of beers in ‘taster’ measures. thelinkery.com

When to go: San Diego is sunny year round, though the warmest temperatures arrive in July and August. While the phrases ‘May grey’ and ‘June gloom’ have been coined for the cloudy mornings that tend to accompany those months, skies usually clear by about 11am.

Accommodation: The Andaz is a party hotel for hot young things in the Gaslamp Quarter. From £158pn.  sandiego.andaz.hyatt.com

Tower 23 is a seafront hotel close to the thriving student bar scene at Pacific Beach. From £148pn.
t23hotel.com