In a town where ‘active’ means leaping off a 134m-high cable car, and to ‘relax’ is to sip wine in world-renowned vineyards, Queenstown is not your everyday resort. It thrives on tourism and hospitality, but more technical trades are available to those determined to call one of the most beautiful corners of the world home. TNT finds out more.

Home to a population of 10,500, Queenstown, in Otago in the south-west of New Zealand’s South Island, can hustle and bustle like a small city. Consider the 1.8 million tourists that flock here each year – particularly in winter – and that is especially true. But for a bite-sized place, it packs a mighty punch, says Buzz Recruitment director Ben Crossen (buzzhospitality.co.nz). “It’s a fun, fast-paced, central location with breathtaking scenery and you get to meet many different people,” Crossen says. “You will never get bored.”

Indeed, mountains such as The Remarkables and Ben Lomond are just as perfect for hiking and biking as they are for snowboarding, and watersports enthusiasts play among the dramatic canyons of the Shotover River, and central Lake Wakatipu.
And as if there’s not enough adrenaline coursing through the town, everyone gets loose during the Queenstown Winter Festival every June and July, packed with music and events. Then it goes from wild to mild. Summer slows down, with long hot days not getting dark until 11pm. Also, a glass of local pinot noir should not be missed at the world’s southern most wine-producing region.

Queenstown is so compact you can navigate it by foot. Otherwise, public transport is clean and reliable. There are a few places you shouldn’t miss: Vudu Cafe (vudu.co.nz) for top coffee, Pub on Wharf (pubonwharf.co.nz) for live music, and Skyline Gondola, Restaurant and Luge for spectacular views (skyline.co.nz). Don’t forget Fergburger – it’s a Queenstown institution (fergburger.com). 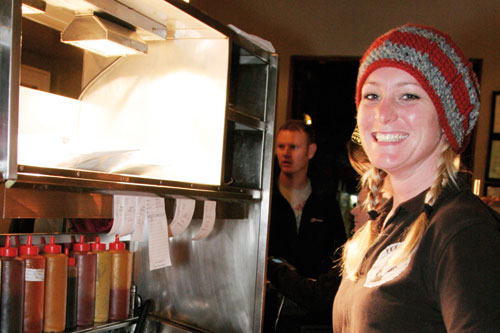 Almost all jobs are in tourism and hospitality. Experience is not necessarily required, but there is a high turnover of staff.
Hostels and hotels are often recruiting for housekeepers, reception staff and food and beverage workers. There are also hundreds of jobs each year on the snow. Look in the Lakes Weekly Bulletin (lwb.co.nz), plus the Mountain Scene (scene.co.nz).
The ski season is from June-October, and most jobs are advertised in January/February. In the summer season, December-April, there are hardly enough people to fill jobs, specifically in hospitality, retail and viticulture.

The average pay is $15 (£7.55) an hour in hospitality and admin, and from $19 (£9.60) as a chef. “The wages are lower in Queenstown than in another parts of NZ, as so many workers from abroad drives remuneration down,” Crossen says. Most nationalities (18-30) can easily obtain a one-year working holiday visa (two years for those from the UK), which can be extended if you gain sponsorship. See immigration.govt.nz.

Settling in again Kiwi Andrew Duncan, 34, moved to Queenstown in November 2011 after 10 years in London. He now works as a hotel manager. “I contacted all the major hotel companies when I got back, but it was only when I signed up with agents doors started to open,” he says. ”It took me two months to get a role – references are very important.” There were some shocks in store, though. “The pound does not go far. Food and power is expensive, and NZ TV will drive you mad. Get Sky.”

Know what you’re in for

Duncan is an anomaly in Queenstown, says Addstaff recruiter Kim Hamilton. “You won’t find a lot of Kiwis,” she says. “It is full of people from all over the world. But everyone is friendly and happy, and if they’re living here it’s because they’ve fallen in love with it … and that’s not hard.”

Most people start at a hostel (about $150/£75wk) then find a houseshare, paying $120-$150 (£60-£75) a week in rent. Otherwise, there’s communal housing such as Reavers Lodge (reavers.co.nz) and Shotover Lodge, (shotoverlodge.co.nz). In winter it gets very cold and having sunlight pour through your house is essential. For this reason, avoid Fernhill on the lake’s north shore (though views are stunning). Try instead Kelvin Heights (expensive), Frankston (popular), or, a 15-minute drive out of town, Arrowtown.