We chat to Carl Barât as a new film goes beyond the tabloid headlines of The Libertines’ spectacular break-up – and fragile reunion.

After all the drugs, bust-ups, no-shows, lurid tabloid headlines and their spectacularly public break-up, it seemed unlikely Pete Doherty and Carl Barât would ever reunite on stage as The Libertines. But reunite they did, along with John Hassall and Gary Powell, for the biggest (and most lucrative) shows of the band’s career at Reading/Leeds Festival last year.

“There were more emotions than I could bear,” Barât remembers. “It was petrifying.”

That the band’s reappearance nearly caused a riot at Leeds is testament to the depth of feeling these rock and roll trailblazers have aroused since they first graced the scene in 2002 as Britain’s answer to The Strokes.

The band’s reunification is the subject of a new film, The Libertines – There Are No Innocent Bystanders. The title suggests a level of culpability on the public’s behalf. “Yeah, that suggests people go to gigs to watch a car crash,” Barât insists. 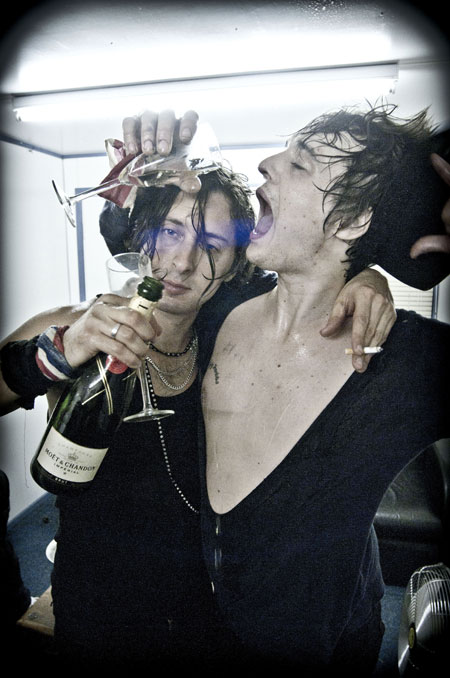 Directed by rock photographer and long-time friend of the band, who shot their very first gig at Cherry Jam for NME, the rockumentary charts the period from the announcement of the reunion to the eagerly anticipated festival shows themselves.

With access to the band’s every waking moment, Sargent was as curious as anyone to see how Barât and Doherty would interact. He was pleased to observe a return of the legendary Barât-Doherty chemistry.

“Just seeing them spark off each other and not seeing them ignore each other – cos that’s what happened a lot in the past, they wouldn’t even make eye contact – just to see that back again, the way they looked at each other, the way they were together onstage. There was no second guessing – it was just like before.”

But don’t expect any Almost Famous-style “I-shagged-your-girlfriend” revelations or fisticuffs, Sargent warns.  “What you’ll get is an understanding of why so many people fell in love with this band in the first place rather than: ‘Pete Doherty’s drug problems!’ or Kate Moss revelations. If people are after that, they’re looking at the wrong film,” he says.

“They’ve done a lot of talking in the press so, to a certain extent, they’ve washed their dirty laundry as much as they needed to. The film is about rebuilding those friendships.”

Barât is understandably cagey about reflecting on The Libertines’ past problems, which dramatically culminated with Doherty burgling his flat, getting jailed, developing a heroin addiction and getting kicked out of the band. You get the sense he’s keen to remind us of the pre-tabloid Libertines whose albums Up The Bracket and The Libertines became instant classics. This is partly why he published the book Threepenny Memoir last year.

“I think I was after equilibrium,” he says. “I wanted to look at the positives as much as the negatives because that’s the truth.  ”I’m not even sure if Pete’s read it really,” he says of the book. “I’m not sure he’d want to drag all that stuff up.”

One of the things Sargent was keen to explore in the film is why the band unravelled, “without being tabloidy about it, within the various relationships.”

“I have a greater understanding from Pete’s point of view,” he goes on. “You could argue that early on he was the only one taking the band seriously, and other people weren’t toeing the line. He wanted to sack John and Gary and that was where the divide started.”

On Doherty’s spiral into drug addiction, Sargent’s theory is: “When he lost one relationship in his life [Barât] he replaced it with something else.”

Barât says he and and his old mate Doherty still catch up ”now and again.”  “We have a difficult relationship – it’s quite stressful and nerve-wracking, I don’t know why, that’s just how it is – but we’ve got nothing but goodwill for each other. “

Sargent says he attempts try to get them to explain the dynamic of their relationship. “You get the sense that Pete has given up on it, which is a real shame,” he says.

“There’s so many trust issues. Carl’s wary of letting himself go and falling into bad ways. I’m not sure that would happen now but they are so entrenched in their preconception.”

The Libertines don’t have any immediate plans to do anything new together. But due to the creativity their chemistry inspires, it’s difficult to believe that Doherty and Barât can live without each other for any length of time.

“Well, a lot of the thread of the film does sound like a love story,” Sargent concurs.

‘Carl And Pete: Lovers!’ We can just see the tabloid headlines now.

» The Libertines: There Are No Innocent Bystanders screens at the gala opening of the East End Film Festival at the Troxy, E1 OHX. Wed, Apr 27, 6.30pm. £15. Festival runs from Apr 27-May 2, various venues (eastendfilmfestival.com).

THE LIBERTINES:  A TIMELINE