Carlie’s first date: the Hunterian Museum at the Royal College of Surgeons

If you missed our introduction to Carlie, you can catch up here.

Well, Carlie’s had her first date – but how did it go? All will be revealed below…

“So, would you be up for going on a date? It’s for charity!”

My follow-up question/statement is completely accurate, but it’s also akin to ducking behind some kind of magical telephonic shield that protects you from the devastating blow of rejection. Who would turn down a date to help fight poverty and homelessness in Australia though, right?

Thankfully, not this work-related acquaintance we shall call ‘Dave.’ Yes! I had scored my first date for Five in Five. Dave even did the next bit of hard work for me by choosing the date location. A relatively new work connection, he had obviously done his research and discovered the quirkier (slightly macabre?) side of my personality, because he chose the Hunterian Museum at the Royal College of Surgeons.

I wanted to kick off this challenge with a non-traditional London dating experience that wasn’t centered on dinner or drinks, and that’s exactly what I got. Peering at a huge array of human and animal parts preserved in jars in a museum that looks like something out of a sci-fi movie is pretty awe-inspiring. Learning about anatomist and surgeon John Hunter along with the barber-surgeons of the 16th and 17th centuries will give you more than enough to chat about – if tales of body snatching and dissection techniques are your thing. 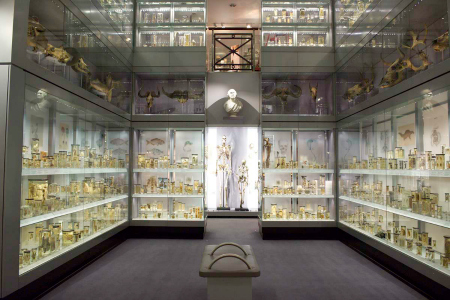 However, you may get a little tongue-tied suddenly coming across an ancient, pickled scrotum and need to start listening very intently to your audio guide. Not to worry, there are floating lady bits coming up next! Who needs a rom-com and holding hands in the cinema when you can watch a video of modern day surgeons drilling in to a skull and removing a brain tumour? And where else can you get up close to a set of Winston Churchill’s dentures, or the tooth of an extinct giant sloth?

It was all pretty amazing viewing, and incredible to think that some of the museum collections are four centuries old. My date did take a more traditional turn after the museum – no alien-like preserved creature of the deep is going to put me off food!

Easy conversation over lunch continued with a sunny stroll along the Thames before we called it a day. I was super impressed with the thought Dave put into choosing a very unique date location that was right up my alley (and may be tough to beat, dammit). Will I be seeing him again? Well, I wouldn’t say no…

Image credit: Hunterian Museum at the Royal College of Surgeons

Hello Kitty Live! is coming to the UK