Even with a dedicated ‘Pink Triangle’ around Broughton Street, where you can hop between CC Blooms, Planet or The Street, the LGBT options in Edinburgh are quite…erm… boring. Dive Queer Party was started in July 2013 by Edinburgh residents Annabel Cooper and artist Miss Annabel Sings because they felt ‘there was nothing like it around for us, nowhere where we wanted to hang out and be free and express our collective madness and joy’. What they came up with is the kind of quirky, alternative, performance night that’s simply brilliant fun.

At their most recent ‘Untamed’ party, live acts included transgender performer Taylor Huxley, spoken word from AJ McKenna Poet, burlesque act Lottie Kixx, an injection of punk from Ste McCabe and the highlight of the night (for me anyway) two songs from ‘Vaudeville’s Darkest Muse’, Le Pustra. For an encore, we were treated to the reunion of comedy duo Pustra/Vile-een, a soon to be resurrected alternative cabaret act formed by Miss Annabel Sings and Le Pustra in 2006.

If you were able to rip yourself away between live acts from the brilliant electro beats of Scottish/Kiwi DJ duo Modifier, the entertainment continued throughout the venue. There were rooms with art installations to explore, ‘creatures’ from Physical Theatre Scotland walked through the crowds and you could even have your picture taken in an animal cage (the party was held in what used to be The Small Animal Hospital of Edinburgh’s Vet School) by a photographer wearing fencing gear. As you do.

Dive Queer Party is very much a queer community effort. Its continued success down to countless friends, volunteers and Edinburgh creatives. It’s given Edinburgh’s queer community the chance to come together and show what they can do, whether up on the stage or behind the scenes.

A Dive Queer Party is a positive, happy place. They’ve created a queer night that’s creative, fun and super friendly. From the people on the door, to the hostess who actually says ‘Hello, welcome’ as she’s working the rooms, to the random strangers in the queue for the loo who strike up conversations with you; it’s the kind of night even the most socially inept of us (yep, that’d be me) could turn up to alone and be guaranteed a good time. 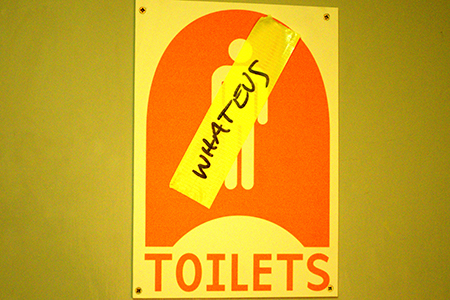 Speaking of the queue for the loo, as well as the convenience factor, this photo of the gender neutral toilets says it all for me. It’s the perfect metaphor for the inclusive vibe you’ll find everywhere at a Dive Queer Party – ‘Whatevs’ indeed!.

Alan Partridge The Movie is confirmed by writer Armando Iannucci