Charlie Sheen was booed at his first live show in Detroit but managed to win back fans in Chicago last night with a show that included his stripping off and kissing his “goddesses” on stage.

Sheen’s live tour – titled Charlie Sheen LIVE: My Violent Torpedo of Truth – got off to a rocky start when the volatile star launched into an unintelligible rant which saw many members of the audience walk out.

Sheen received heckles and jeers from the Detroit audience and immediately after the show Twitter was inundated with tweets hashtagged “bombing”.

Before Sheen left the stage, the 5,100 capacity crowd at the Fox Theatre began chanting “refund!” 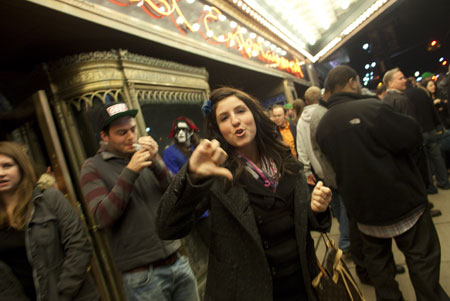 An angry Charlie Sheen fan outside the Detroit theatre where his opening night show bombed.

The star managed to take things in his stride, telling the audience: “Tell the guy next to you booing to shut the fuck up because he’s ruining it for the rest of you.”

And, “I’ve already got your money, dude.”

But Sheen-mania was back last night when Charlie returned with a re-vamped live show for the city of Chicago. As he took to the stage the crowd chanted, “Detroit sucks, Detroit sucks.”

This time, Sheen relied on a Q&A format that saw questions from the audience unearth such treasures as a story about smoking weed with Sean Penn.

He also explained that the reason he has paid prostitutes for sex in the past was “because I had millions to blow [and] I ran out of things to buy.”

At one point in the show, Sheen ripped off his shirt to swap with an audience member. He then dragged goddesses Natalie Kenly and Bree Olsen onto the stage.

Sheen also revealed the secret to being a “goddess”: “You have to be fucking me. Start there. The rest is up to you!”

You admitted though that there was no room for a third. “I tried a third. I did. You can’t keep an eye on the third one. I have two eyes. I have two goddesses. I’m not bipolar. I’m bi-winning.”

When asked how many times he had been married, Sheen retorted: “Seven-thousand. That’s why I’m broke.”

AA was dismissed with: “I just stopped. I don’t believe in all your fiction, all your bullshit. I got tired of losing. I said, ‘Fuckk all this. It’s time for winning.'”

After the show, Charlie was congratulated on his comeback, to which he replied: “Comeback? That would mean I was down.”

Sheen’s erratic behavior, which included lashing out at his Two and a Half Men producer Chuck Lorre, finally became too much for Warner Bros. Television, which fired him March 7.

Charlie’s father, Martin Sheen, has said that his son’s addictions are as “dangerous as cancer” and said that the way to deal with it was to “lift him up and pray for him.”