Tell us about your new show, Home Stretch Baby…

It’s about the glory of middle age from an ex rock ‘n’ roll comic.

What’s surprised you about middle age?

You hear ‘home stretch’ and think it’s about death, and it is not. The premise is: things that seemed before an impenetrable prism of agony, woe and despair, you get to a certain age and suddenly become so far removed from them they become comical.

You realise there is nothing that can happen that you won’t get over with time.

Is it difficult performing a show about your younger self?

I tell a few home stories from the beginning of my career when I was so full of anger. Without the right tone and the gift of hindsight, people are horrified.

I’ve had a lot of betrayal in my life and so there was rage from that. And there’s a retelling of my worst gig which is, hands down, the worst gig in the history of comedy.

It was so embarrassing. My sister had lost her husband in a car accident, and our parents came along to a gig I thought would cheer everyone up.

But it went fucking horribly, and basically the whole room couldn’t even look me in the eye.

What else changes with middle age?

You can’t do things as quickly but, then again, you aren’t in such a rush, either. I took my son snowboarding recently and I got pretty bashed up.

It is going to take longer to repair than it used to, but 20 years ago I wouldn’t have been snowboarding in the mountains in the first place – I would have been face down in a pool of my own vomit in a hotel somewhere.

What else have you noticed?

And it got a standing ovation. It’s one of the better shows I have written and certainly one of the ballsiest things people had seen me do.

Has your writing changed with time?

As you get older you learn to take on themes – topical stuff gets old quickly. This is about after my break-up, when I tried to restore my faith.

It’s about trying to find balance in life and making fun of organised beliefs, especially atheism. 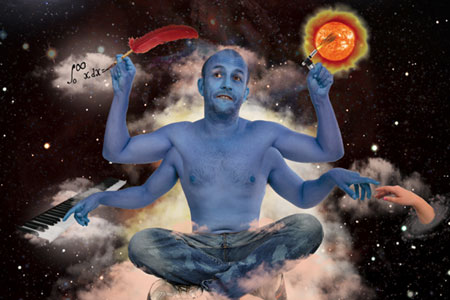 What annoys you most about atheism?

Anytime you get a movement together it’s going to be full of arseholes – the atheist argument can be just as trite as intelligent design.

Either we created god or god created us. Regardless, something miraculous occurred.

Are there parallels between religion and atheism?

Those dicks on marches trying to cram this shit down everyone’s throats are just as bad as the Christians. As a movement they have a book in The God Delusion, a figurehead in Richard Dawkins, and they’re trying to change the world according to their book – like Christianity. But say that and you’re thrown in the Bible camp.

It can be as intolerant as Christianity…

Yes, but Richard Dawkins doesn’t take on Professor Phil Davies anymore, because last time he gave him a run for his money.

So he takes on creationists, but anyone who feels smug for pointing out the Bible isn’t real deserves having the piss taken out of them.

If you look at the American presidential election, religious affiliation is at the forefront of it, but I am proud of the fact that here in Europe a politician’s career would be over if they dared bring up god.

What do you call yourself?

At a push I am an agnostic pantheist, and this is what the whole show was about, trying to find what I thought and believed in.

You were brought up Catholic – when did you begin to question it?

Probably when I was nine! I had an argument with a priest. He insisted on taking my confession and I got sent home because I said: “No, you first.” I couldn’t stand him and knew he was a reprehensible human being.

Have you been surprised by reactions among your peers?

You’d think the comedy community is all in the atheist camp, but a lot of people have said to me that they’re pleased I am taking the piss out of atheism, as it’s rarely questioned.

I wasn’t arguing from an academic standpoint but speaking emotionally from the heart.

The paradise island of Barbuda

Where to stay in Australia – from camping to hostels and hotels