Your new album, Heartthrob, is a bit of a departure, more pop than indie-rock…

Before we do any record we look at the demos to see if there’s a vibe sticking out, if it’s more of a guitar or keyboard record. But with this one, we’d talked about what sort of production and producers we wanted to work with.

It has to be something any Tegan and Sara fan would get.

The songwriting and voice is what people associate with our band, but we wanted to open the band up to new opportunities.

Why look for a more diverse audience?

We’ve done enough travelling to know indie-rock is a niche market – it’s not as big internationally as in the US and Australia.

We’d had success outside our genre with people like Tiesto doing electronic music, and being pop music connoisseurs, we were able to grab from these areas to make something that sounds like us.

Is it more upbeat than your 2009 release Sainthood?

If I was left to my own devices, we would make much sadder and less popular records.

There was an active choice, even if a song was going to be a real heartbreaker, to focus on production that would lift the song out of shoegaze, subtle mode.

We didn’t want them to be lost, but to be able to play them on a festival stage. We wanted something that sounds like a fucking rainbow coming out of the speakers.

Which artists influenced the writing?

I fell in love with The-Dream. It is more R‘n’B and hip-hop but has intense production and melodies, it felt like I was listening to a future version of Prince.

And people like Robyn and Alicia Keys, stuff that reminded me of music I listened to growing up with powerful melodies and heartbreaking lyrics.

I remember being obsessed with Keys’ Try Sleeping With A Broken Heart when it came out in 2009 and wanting it to be my song! 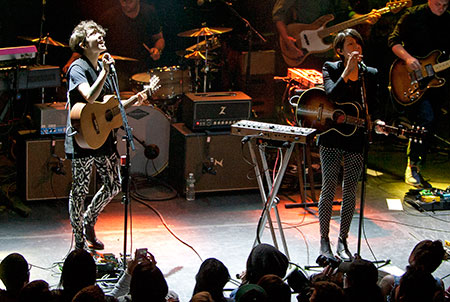 How was it doing support slots last year with The Killers at The O2?

It’s our seventh record so we decided to do support slots and focus more on radio. We are either ambitious or masochists, we don’t know yet.

You spend all these years at the start fighting to build your own audience to play to and now we’ve arrived at a place where there could be significant growth, it feels good to get in front of an audience that doesn’t know every chord to every song.

How does the set reflect this?

We’ve learned over years of support tours that what works best is the music, so we’re playing the hits.

Now we can keep an audience interested without too many lulls – rather than: “Oh, it is a deep cut from their album in 2003 … I’m going to the back.”

When we are doing our own stuff, we’re able to give a broader look at the band, play more songs and tell stories, but when opening for someone else, we want to win people over.

But you have to have a thick skin as not every night is amazing.

How do you react to tough shows?

It varies. I’m not as dramatic as I used to be.

There used to be nights where I’d be existentially challenged thinking, “We may have made a huge mistake with what we decided to do with our lives!”

As an adult with experience now I’m able to self-soothe more quickly.

Do you still get anxious releasing and touring a new record?

I do, but it’s a positive anxiety – it’s not stage fright or throwing up in the bathroom, it’s I want to feel in control because it can be hard to keep yourself together when you’re about to walk out in front of 10,000 people!

What’s the secret to being a successful sibling duo for 13 years?

It’s being forgiving of the times when you are going through bad patches, that is a big part of it.

I hate to compare it to a marriage, but it is similar in terms of when people want to combine their resources and have a long-term future involving each other.

Do you have differences of opinion?

There are times when we do go down different paths and we do have to figure out how to get back on the road we’ve said we’d go down.

Once in a while it is OK to go down a path of conflict if it gets you feeling good again, though.

It is different to how it was in my twenties.

When we were figuring out how to be adults, the road was an extension of home, but now it’s clearer how weird and dysfunctional it is to live in a travelling circus.

Heartthrob is out February 11 through Warner