Chevrolets and salsa in Cuba

Castro’s Cuba is best seen on a backpacking adventure so shun the package deals and follow in the footsteps of TNT’s Janine Kelso as she checked out the country by car, horse, bike and foot…

The orange Chevrolet that we’re sitting in couldn’t accurately be described as a convertible because the top has clearly been hacked off, but it still looks the business as we cruise through Havana’s atmospheric streets. Like a film set, the time warp town is loaded with vintage rides, from Buicks to Chryslers, most of which are used as taxis. Some are beautifully restored, while others show their age with creaking bodywork, windows that don’t open and clapped out doors that have to be held closed.

Latin beats spill out from the balconies of crumbling art-deco and 19th century mansions where hanging washing flutters in the breeze. 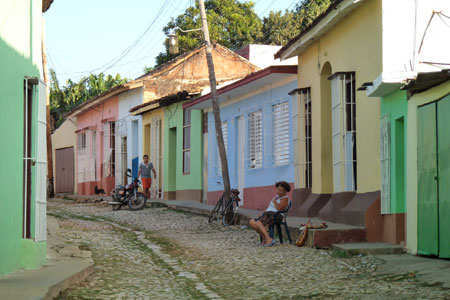 There are no adverts in Cuba, only revolutionary slogans and huge photos and paintings of Che and Fidel. The only brand we ever see is Havana Club rum.

Our ride begins along the Malecon, Havana’s sea wall, where we spot snogging couples, transvestites and an elderly man oblivious to the world as he boogies to some salsa blaring out of a small beat box.

At Plaza de la Revolution, we pose for pictures in front of a giant frieze of the world’s sexiest revolutionary, Che Guevara, his face a ubiquitous presence in Cuba. Surrounded by grey monoliths, the famous Plaza doesn’t look that impressive, but it provided the setting for Fidel Castro’s speeches where up to a million people used to cram in to listen.

Our tour ends at Fabrica de Tobaco Partagas, the city’s oldest and largest cigar factory, where we watch hundreds of nimble-fingered workers hand-roll cigars for 12 brands, including Cohiba and Monte Cristo. The employees, who produce about 100 cigars daily, are read to from novels, plays and newspapers for two hours each day. 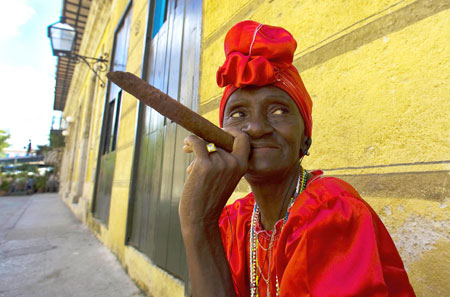 My boyfriend and I are backpacking around Cuba for two weeks, travelling by bus and staying in casa particulares, the Cuban alternative to B&Bs (see box, right). Our one rule was that we wanted to avoid any foreigners-only all-inclusive resorts: we want to see the real Cuba.

Leaving Havana behind, we head west to the tiny village of Viñales in the province of Pinar del Rio, famed for its brilliantly green valley dotted with bizarre pin-cushioned shaped limestone hills, known as mogotes.

Vinales is a sleepy spot, where horse and cart is the transport of choice, chickens, goats and pigs wander into the road, and locals smoke cigars while sitting on rocking chairs on their porches. But Cuba’s infectious energy is ever-present: music booms out of the pastel-coloured colonial-style houses and the Polo Mantanez Centro Cultural club, which offers top-notch live music and sees a mix of hip grannies and cool twenty-somethings taking to the dancefloor, both of whom could show Beyonce a thing or two about booty shaking.

We’re told that the best way to see Vinales is on horseback, so we trot through tobacco and sugarcane fields where men in cowboy hats use two pulls to plough the land. We stop at a farmhouse where a Cuban farmer rolls a cigar for us from his own tobacco crop. We’re told not to breathe in deeply, to just loll the smoke around our mouths and then blow it out. We wash it down with a mojito, a minty rum cocktail, to which the farmer adds a dash of honey, a local spin on Cuba’s favourite drink.

Our trip morphs into a blur of mojitos and salsa as we leave Viñales for the beautiful town of Trinidad. The colonial city’s cobbled streets are like a living museum with vintage cars on every corner and perfectly preserved 16th-century houses.

It’s impossible to be in Cuba and not attempt to dance salsa, a sizzling hip-shaking dance that all Cubans learn as soon as they can walk, so we take a class in a tiny backyard at a rear of a shop with a local instructor, Michael.

After perfecting (ahem) the basic steps, I’m soon being twisted and twirled until I’m dizzy. After the class, we reward our efforts with Mojitos and Cuba Libres at Casa de la Musica, an open-air live music venue which
offers nightly entertainment followed by salsa dancing. 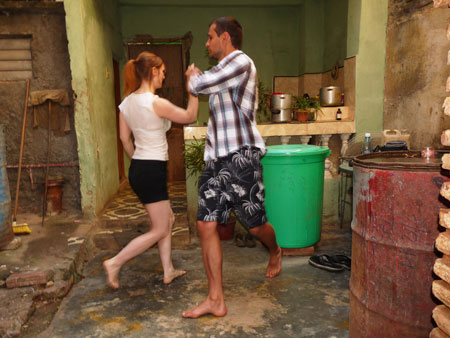 Just outside Trinidad is the Topes de Collantes nature park, which offers hiking and horse-riding opportunities.

We trek along a steep and winding path flanked by a steamy tangle of jungle that leads down to a gushing waterfall, Cubano. At the foot of the waterfall is a natural swimming pool where we take a chilly yet refreshing dip. 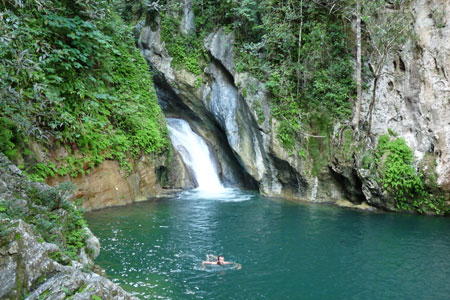 Next day, we hire bikes, which terrifyingly have no brakes or gears, and cycle 13km to the beaches on the Ancon Peninsula, overtaking horse and carts pumping out reggaeton, Latin hip-hop.

The first beach we arrive at, Maria Aguilar, is completely empty, a palm-lined paradise, where we spend several hours swimming and soaking up the sun.

We cycle onwards to Playa Ancon, home to several all-inclusive resorts. The sheltered bay is great for swimming but is teeming with European tourists, with not a Cuban in sight aside from the workers.

We grab a quick mojito then get back on our bikes to escape this artificial all-inclusive could-be-anywhere beach and return to Castro’s Cuba. 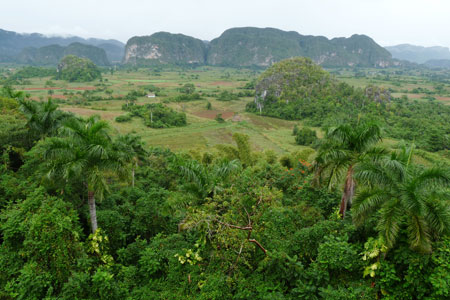 Che Guevara devotees should make a pilgrimage to Santa Clara, a three-hour bus ride from Havana, as this is where his ashes lay. See the Monumento a la Toma del Tren Blindado, the derailed train that has lain here since 1958 in the Battle of Santa Clara, marking one of the last military encounters of the Revolutionary War. The armoured train, containing dictator Batista’s forces, was derailed by tractors deployed by 300 rebels, led by Guevara. Also in Santa Clara is the Museo Memorial al Che, where you’ll find a giant statue of the man.

There’s also a museum with photos and memorabilia, including his clothes, pipes and asthma inhaler. Spend the night at Casa de Consuelo Ramos y Nelson Turino, in Calle Independencia, where Guevara apparently slept for several nights in 1959 with his girlfriend, who later became his wife.

Give back to Cuba

As a communist country, Cuba has a complex financial system with two currencies – pesos for locals and convertible pesos for tourists. The average Cuban earns only 30CUC (£20) a month.

There are many commodities that Cuban people just can’t afford, such as pens which cost a whopping 1CUC, a day’s pay.

If you want to make friends, and help out, rather than doling out cash, hand out pens and crayons, especially to children. Cubans are also grateful for clothes, aspirin, toothbrushes, toothpaste, and dental floss.

WHEN TO GO: Dry season runs from November until April, while May to October is hot and humid with occasional but short-lived rain showers.
GETTING THERE: Fly direct with Virgin Atlantic, Air France and Iberia. Flight takes around eight hours.
GETTING AROUND: Buses serve the major cities and are punctual and cheap.
VISAS: Everyone who visits Cuba needs to buy a visa for £15 from the Cuban Embassy in Holborn.
CURRENCY: Cuba Convertible Pesos. 1 GBP = 1.46 CUC.
LANGUAGE: Spanish.
GOING OUT: A mojito is $2.50CUC and a bottle of Cristal beer is $2CUC.
ACCOMMODATION: Stay in Casa Particulares from 20-25CUC per night for a double room.
GET MROE INFO: cubatravel.cu

What do you enjoy about living and travelling in the Europe?