It was a day of high political drama, the likes of which some Australians are tiring of.

Earlier in the day Gillard had given an official apology for the policy of forced adoption of children born to unwed mothers between 1940 and 1980.

Gillard announced the leadership spill following calls from senior ministers in her cabinet for Rudd to take over from Gillard.

Rudd, who had previously said he would not run unless he had the ‘overwhelming’ support of the party, in the end refused to nominate and Gillard won unopposed.

“I’m grateful to my colleagues for their continuing support for me as demonstrated in our meeting,”  said Gillard following the poll.

“Today the leadership of our political party, the Labor party, has been settled and settled in the most conclusive fashion possible. The whole business is completely at an end. It has ended now.” 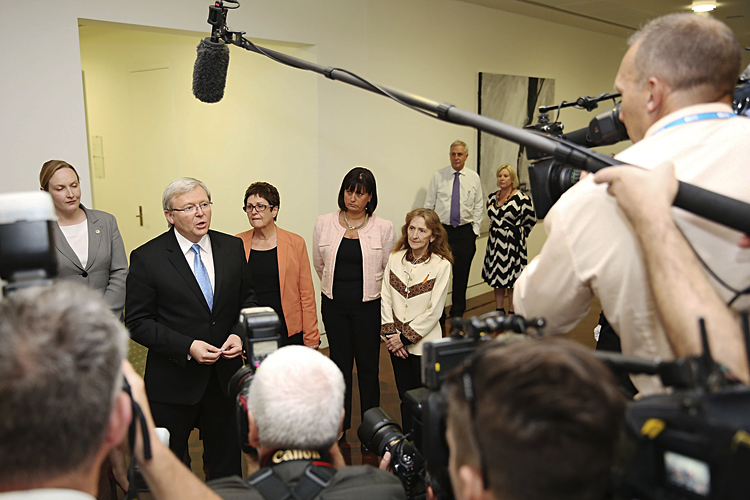 Unsurprisingly opposition leader Tony Abbott capitalised on the vote saying that “Civil war will continue as long as Kevin Rudd and Julia Gillard are in parliament”.

“The only way to give our country the good government that we so badly need right now is to have an election. We cannot wait for September 14,” Abbott added.

Key Labor figures are said to be worried that Gillard continues to trail Abbott in the polls, with many feeling Labor cannot win the September general election with Gillard as leader.

Despite Gillard’s profile growing outside Australia following the viral success of her misogyny speech and crushing Rudd in another leadership ballot last February, Australians aren’t convinced and she remains behind in the polls.

A poll in The Australian shows Labor with just 31 per cent, the ALP on 47 per cent and the The Greens with 11 per cent.

Aussie MPs on the leadership spill

Review: Events While Guarding the Bofors’ Gun at the Finborough Theatre

Revealed: what Aussie flyers love and loathe about flying