Clarke reached 161 – claiming his 27th Test century – and guided Australia to 494-7 as his side continued to dominate the Test.

He had resumed on 92, and moved quickly to 99, but the 32-year-old spent 24 balls on 99 before reaching his century before lunch.

“Probably it was more a relief to you guys (the media),” Clarke told Grandstand. “It was obviously a tough innings – if it was one of my best, you can ask me at the end of the game.

South Africa are without main spearhead Dale Steyn, who suffered a hamstring strain on the opening day, and they missed him as they struggled for wickets in the opening session.

The hosts fared better in the afternoon session, with off-spinner JP Duminy having Shane Watson caught in the deep after he raced to 40 off 32 balls.

Duminy followed that by claiming wickets off successive balls when Brad Haddin picked out Hashim Amla with a fierce drive, before dismissing Mitchell Johnson – with some help from the decision review system. 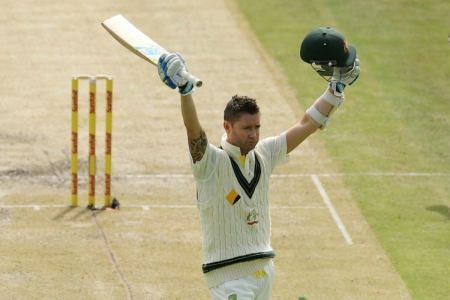