The view across the Mae On Valley is spectacular, even for northern Thailand, where waves of lush tropical jungle rising into misty hills are an everyday sight. But there’s something about this vista that is especially knee-trembling: the fact that I am 40ft up, clinging to a sheer rock face with nothing but a rope for reassurance should my fingertips fail me.

More significant than the rope, it suddenly occurs to me, is the knot, which begins to gnaw at my mind – did I fasten it tightly enough? Will it hold me if I fall?

Truth be told, at the beginning of the day I had not expected to be supported at such heights by a rope I had tied myself. Enrolling for a day’s beginner rock climbing course in the northern city of Chiang Mai, I anticipated much in the way of balancing exercises and rope-tying practice, with a little climbing in the afternoon, if I was good and impressed the instructor with my figure-of-eights. 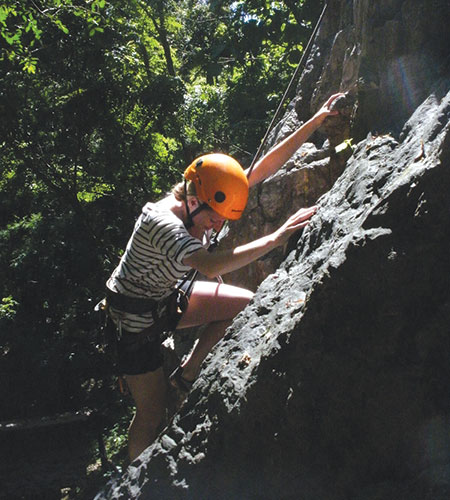 In fact, once we’d been shown our way around a rope and harness and taught how to belay a climber, we found ourselves at the foot of what appeared to be a mighty tall cliff, squinting against the sun at the faraway summit.

This brevity is essential, I later realise: there’s very little you can learn about rock climbing from ground level. To progress at all, there’s nothing for it but to put feet and hands on solid rock and start upwards.

And so, after stepping forward (well, being shoved by my husband when the instructor asked who wants to go first), I gingerly grasp an outlying lump of rock that appears to be firmly attached to the rest of the cliff face. Jabbing the opposite foot at a narrow shelf about three inches high, I step off the ground.

Our instructor, Mario, shouts words of encouragement as I scramble for purchase on the craggy rock. “Good job!” he calls up enthusiastically when I stretch beyond my comfort zone to clip in a carabiner.

As I reach higher, and the hand-holds become shallower and seemingly invisible to the naked eye, he calls out potential places where I can re-position my fingers and feet: like magic, ledges and small protuberances emerge from the cliff, which I grab gratefully. 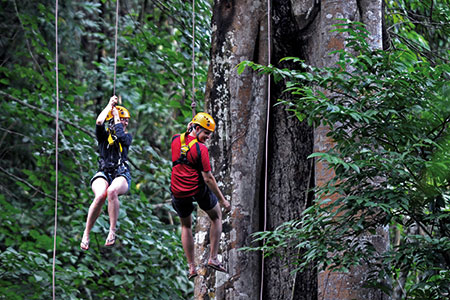 I’m just starting to think I’m getting the hang of it when, after about 20 minutes’ climbing, I realise I’m at the top of the route. Satisfaction soaks in and I pause for a minute, hugging the rock with my forearms for balance, and turn my head to look down. I can see two small blobs at the foot of the rock – the turquoise one holding the end of the rope must be my husband. I silently thank him for not letting go.

I’m also grateful for the season: coming to Thailand in August – their monsoon season – means fewer tourists. Instead of up to six people per course, there is just the two of us, which feels more like private tuition.

It’s not the first time this trip I’ve been glad to have missed peak season. In the south, we’d stayed on an island called Koh Hai where, for most of the week, we’d been the only visitors to a quiet resort on the western coast. As a result, the beach was deserted and our bungalow was hugely discounted. Although the sun sets earlier and there were periodic tropical storms, it was a price we were more than happy to pay for the relative peace and quiet.

Coming to the north, the weather is less dramatic than in the south, or in Bangkok, where mid-afternoon brought torrential rainstorms that thundered down suddenly between bouts of glorious sunshine. With its mountainous topography, the north is fresher, greener, and generally cooler.

This is one of the things that makes Mae On such a perfect spot for climbing. While many enthusiasts head to the south – to Railay or Tonsai in Krabi, where white karsts rise out of a clear aquamarine sea – for me, the vast expanse of untamed forest is unbeatable. 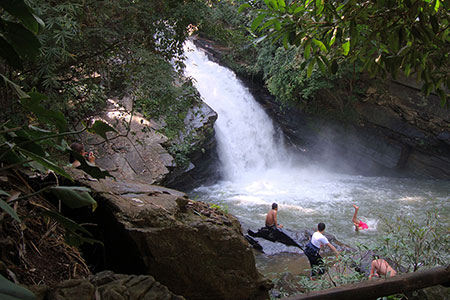 Rising out of the foothills of the Himalayan mountains, Mae On’s limestone crags loom out of the foliage somewhat abruptly. Known as Crazy Horse Buttress (we’re told the rock formation resembles a horse’s head, though I can’t see the likeness), the site we’re at is home to a vibrant community of Thais, expats and travellers of all ages – as well as Buddhist monks who come here to meditate in the caves in peace.

But unlike many other places we’ve visited in Thailand, the division between tourists and Thais seems not to matter – rather than foreigners, here we are simply novices.

As we make our way higher up the buttress, towards a massive cave we are planning to rappel (abseil) into, we pass a young Thai woman. “Where’re you going?” she asks, smiling. When we tell her, she looks genuinely excited. “You’ll have a great time!” she promises, although looking at the route she’s just scaled, I suspect the drop is nothing to her.

When we arrive at the precipice of the cave, I’m slightly disappointed. The mouth is a small opening between a handful of scattered rocks and I can barely see into the darkness from the bright sunshine outside. But by now I’m more confident with the rope – and with my ability to control it. I lower myself down just the way Mario has told me.

“That stuff you see in movies, when they just whiz down the rope, that’s just for the movies,” he says, when I ask about the dramatic ‘commando’ drops in action films. “It’s just irresponsible in real life.” 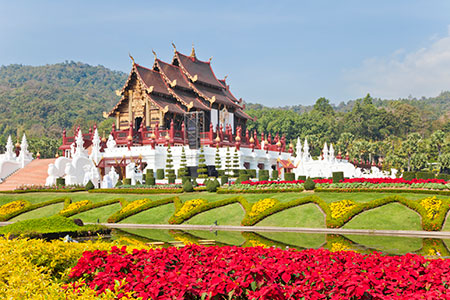 When there’s no more rock to walk down, just vast echoey space beneath me, I ease into the harness and observe my surroundings. The size of the cave alone is awe-inspiring – at least 80ft tall and wider than I can see. A larger mouth, higher than the ingress we used, lets in light that illuminates the dripping roof and crystal pools below.

There is a sense of being entirely alone here, though many climbers must have passed through. In part, this is due to the ‘leave no trace’ mantra that is keenly observed throughout the entire site.

It’s an aspect of the wider current of ethical responsibility at Crazy Horse. The company running our course, Chiang Mai Rock Climbing Adventures, has spearheaded a ‘green’ movement. The toilets are compostable, and plastic is frowned upon. The company is also on the warpath against the ubiquitous water bottles that blight many of Thailand’s beauty spots. Instead, they have installed water stations throughout Chiang Mai which, for a few pence, will refill empty bottles.

It’s the first time we’ve encountered such environmental awareness in Thailand but, in a way, it’s a natural place for such a movement to start. The climbers at Crazy Horse have a deep-rooted concern for the site and its natural beauty.

One man more than any other embodies this sentiment. Loung Nan, known locally as Uncle Loon, is the informal caretaker of the site. From trimming unruly foliage to assembling thatched bamboo platforms where climbers can shelter from the sun, he is behind much of the site’s ‘landscaping’: the ladders, bridges and scaffolds that lead between the different areas of Crazy Horse. 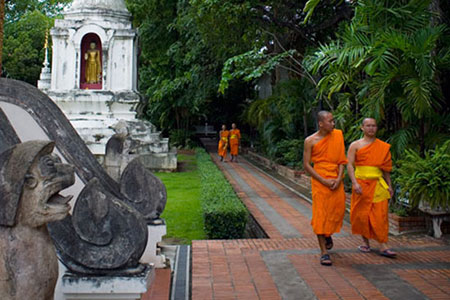 As a result, there is no sense here, as there is elsewhere in the north, that some fundamental element of Thai culture is being co-opted or exploited for the sake of tourist coffers. By the final climb, we’ve learned to stay close to the rock; that with careful balancing, the smallest of mantles will suffice to leverage our weight towards a better grip.

The distance between hand-holds is greater on the later routes and I have to stretch further, with less to grip onto. At times only the very tips of my toes are touching the wall as I lean towards ever scarcer, and ever smaller, ledges and outcrops.

My fingers and forearms scream with the strain, so rarely put on them. By the time I reach the top, I am physically and mentally exhausted. But looking out makes it all worthwhile. The miles of bamboo forest roll out beneath me like an emerald carpet, broken only by the sky in the distance. Unlike some of the other spectacular vistas I’ve seen in Thailand, this view I feel I’ve earned.

Getting there: Return flights from London Heathrow to Chiang Mai, via Bangkok, cost from £640 with EVA Air.

When to go: November to February is the best time to avoid the rains or baking heat, but June and July – the beginning of the rainy season – can be a great time to visit the north, and August to September is blissfully quiet.

Kiwi man performs haka outside tourist’s caravan, then robs them