What’s stopping you? You keep saying you’re going to take up running. You even bought those new trainers, which are stashed at the back of your wardrobe. You’re out of excuses, so just bite the bullet and get out on the street. The weather is mild and London provides some wonderful and varied routes for pavement-pounders.

Before you up your pace from amble to high-speed, however, heed the expression ‘you must walk before you can run’.

Mike Antoniades, of Sport Dimensions (sportdimensions.com), says: “Due to our ?lazy Western lifestyles, our muscles switch ?off and the best way to wake them is to ?walk for one hour, at least three days a week for two weeks, then, in subsequent sessions, alternate one minute of walking with 30 seconds of running.

“One of the great things about exercise is that it makes you feel good, but endorphins don’t kick in, and calories don’t start burning until you are half-an-hour into your workout.

“So, once you start running, go for an hour each time, four times a week and you’ll start to see results in as little as one week.”

To help you on your way, we’ve asked three of London’s most seasoned runners what are the capital’s best running routes. 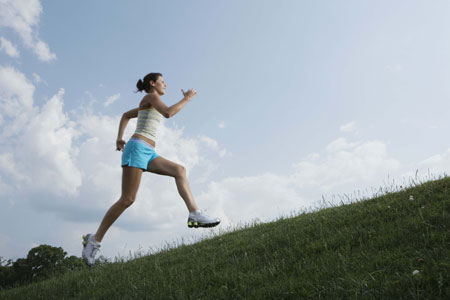 “I love seeing urban life while on my runs and I always get a great snapshot running around London Fields, then cutting down and into Victoria Park for a circuit,” Love, who owns lovelondonfitness.com, says.

“You see all kinds of people in the mornings, from party-people who have obviously been on a bender and slept in ?the park overnight, to the Chinese man shuffling along for his Tai Chi session.

“The route around the park is roughly 8km, but you can adapt it by cutting through it. I run for at least an hour. The length of time you run is much more important than counting kilometres.”

Nurari Merry, 40, retail assistant at Run And Become (runandbecome.com), says: “It’s always a great route to set off from Kingston and run along the Thames towpath.

“You can go on for as long as you like, passing through lovely little towns and eventually hitting Hampton Court Palace.

“You can run up to a half marathon and it’s all flat. When you’ve had enough, you only need to pull up at one of the railway stations along the way and head back.

“It’s such a pretty route and you can even pick blackberries from bushes along the way.” 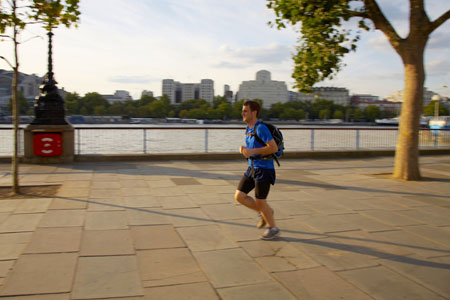 “A great lunchbreak run is from Victoria to Hyde Park, taking in the best sights in central London,” Lusignea of Runner’s Need (runnersneed.com) says.

“I go up past Buckingham Palace towards Hyde Park Corner, then cross through Hyde Park up to Marble Arch then take a left and follow the path along Bayswater Road, cross over into Kensington Gardens, past Kensington Palace, along the Serpentine ?and into Hyde Park Corner.

“It takes me about 40 minutes and it avoids traffic and pedestrians. There’s nothing worse than having to stop, start ?and dodge.

Woods: “I’m in the best shape for ten years”

Summer lovin’: 3 of the best ‘beach’ bars in London

St Pauls from the Riverside