A glass case holds thick, faded prescription registers and there’s a cabinet filled with half-empty bottles of morphine and codeine. But this isn’t some trendy gimmick dreamt up by the owner; these are all original features, found stored in the building when the 120-year-old chemist closed its doors and this shiny bar serving antipasti and cheese boards took its place.

Arthur Mayne is just one stop on the Cork Heritage Pub Trail; essentially a pub crawl, but with just enough history behind each of its seven venues to justify spending your time in them as actually helping you get to know the city better. 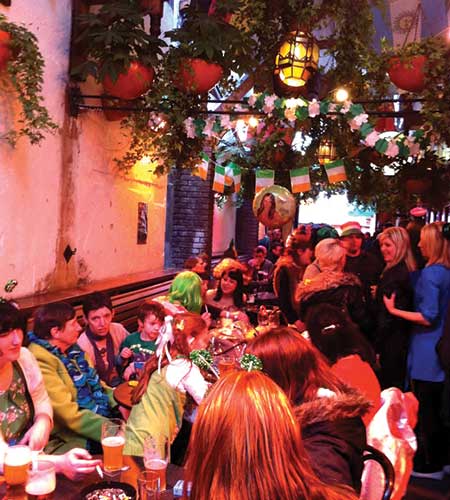 And Cork – widely recognised as Ireland’s second city – is well worth getting to know, a modern metropolis built on a rich past. (Its nickname, ‘the rebel city’, comes from its support of the house of York in the War of the Roses, circa 1455.) Among the more commercial shops and bars that crowd Cork’s streets are businesses that have been owned by the same family for decades. And herein lies its charm: Cork is a working city that has moved with the times, but hasn’t forgotten its history. To that end, each stop on the Heritage Pubs Trail comes with a story that reveals a snippet of Cork’s past. And I’m more than happy to visit each venue to learn it.

I start the day in The Oval, built in 1918 by the Beamish Brewery across the road. Beamish Stout is one of Cork’s most popular exports and for more than 200 years has been brewed in what was at one time the largest brewery in Ireland. Inside, The Oval is much like several other pubs on the trail (Sin É, The Mutton Lane Inn, The Vicarstown Inn). Their snug, darkened interiors, lit by the glow of beer taps along the bar and candles in empty, wax-caked whiskey bottles, are all equally atmospheric, and often dotted with the odd traditional band jamming at a table. Beats a soulless chain bar every time. 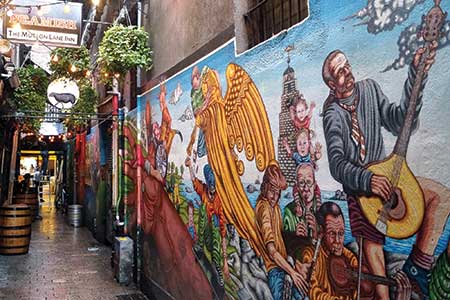 The oldest pub on the trail is The Mutton Lane, which has sat in an alley next to tourist magnet The English Market for more than 220 years. Running the length of Mutton Lane itself is a bright painted mural through which weaves a number of stories from Cork’s past. You won’t find yourself short of locals to ask about what is depicted in the artwork, much loved by the city.

In The Vicarstown, the twentysomething bartender tells me what the heritage trail venues have in common: “They are all pubs I’d go to.” Far from being tourist traps, these heritage pubs are as popular with the people of Cork as weekend visitors. 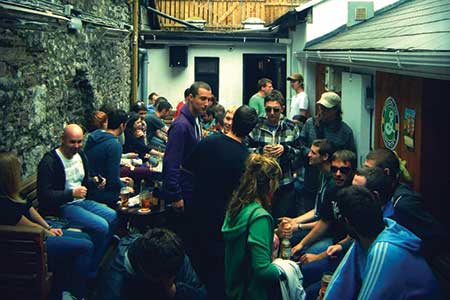 The sleeker stops on the trail are the Crane Lane Theatre and the Bodega. The former’s colourful history includes a stint as a gentlemen’s club, but now the live music venue – dotted with candelabras and black-and-white photos of movie stars and musicians – is a popular late-night alternative to sweaty nightclubs crowded by college students.

The same can be said of the Bodega, where I end the day. This began its life as the St Peter’s food market – built as part of a project in the 1840s to rejuvenate the city’s neglected market scene – before serving as a munitions factory during World War I and later a garage. Today it’s a glamorous restaurant, bar and nightclub lent a vintage vibe by the original pillars that support the high ceiling. 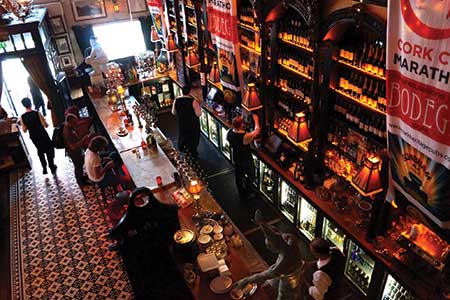 Seven pubs down, I take the unusual step here of ordering a (virgin) coffee, forced to wait out the rain. But while I could have walked into any of the bars in Cork to stay dry, the stories and character of those on the Heritage Pub Trail have turned a typically boozy visit to Ireland into something more. The old pubs still standing and the new venues evolved from factories and chemists are proof of Cork, ‘the rebel city’s, resilience and future. Long live the rebellion.

Info about the Cork Heritage Pub Trail can be found at corkheritagepubs.com

Getting there: A return flight from London Stansted to Cork costs from £40 with Ryanair.