East side story: Explore Eastern Europe by travelling arm-in-arm with the ‘Baltic Bear’

Where, however, is the fun in that? Where are the random meetings, the weird meals and the lost in translation moments that come from taking the road less travelled by bus, boat or train? There aren’t many places in Europe still untouched by mass tourism, but most that do still exist are out east.

It’s more than 20 years since the fall of Communism, but the former Soviet states are still relatively cheap and undiscovered, plus safe and easy to get around. Sure, many cities get swamped with no frills flying weekenders, but escape the bright lights and you’re not likely to hear much English.

One route characterised by its medieval castles, stunning old towns and vodka-swilling locals is one we like to call the Baltic Bear, starting in Prague before heading north-east, all the way to St Petersburg. 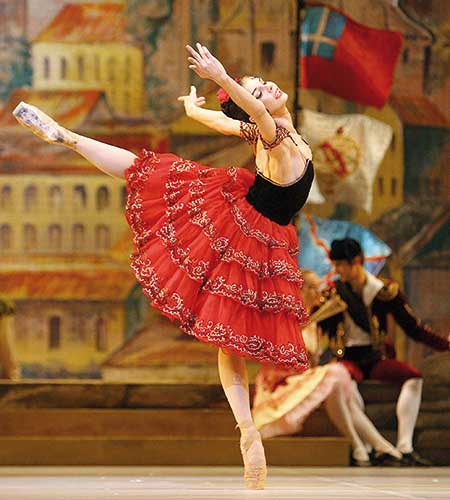 The lowdown: Fairytale-like and atmospheric, the Czech Republic is simply gorgeous. From Disney-esque castles to cobblestone villages and lush forests, it has only been a country since 1993, but offers a timeless experience for visitors. No longer quite as cheap as back in the day, Prague, or Praha as the locals know it, is only gaining in popularity.

The Czech capital escaped virtually undamaged from World War II and then avoided redevelopment due to its extended era as a communist country. Plus, you can get there for as little as £26 from Luton with Wizz Air.

Highlights: Don’t miss the Old Town Square and one of Europe’s weirdest clocks, the Orloj, or astronomical clock, which puts on a little show every hour. Prague Castle, meanwhile, dates from the 9th century and is seriously massive and stunning.

Then there’s the Charles Bridge, so beautiful you almost won’t believe it’s real, especially before the 10am tourist rush. Finally, don’t miss a poignant reminder of times past by seeing Europe’s best-preserved old Jewish ghetto. The Nazis chose not to destroy it, plus its six synagogues and cemetery, because they wanted to turn it into a museum of extinct races.

Moving on: Jump on the overnight train to Krakow, Poland. The eight-hour trip costs from £38. 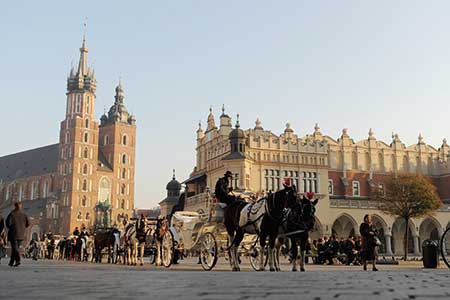 The lowdown: With historic cities, snow-topped mountains and even a beach or two, Poland is one of Europe’s most underrated countries, as well as one of the biggest.

Highlights: Start in “cultural capital” Krakow, widely considered the Poles’ most beautiful city. While there, make a visit to Auschwitz to tour the remains and museum of the largest Nazi concentration camp in Europe. Even history haters will find it a day impossible to forget.

While there, mission out to Malbork Castle, the world’s biggest surviving medieval castle. And don’t forget to try the vodka – Poland, after all, is the spirit’s birthplace, so maybe don’t challenge the locals to a drinking contest.

Moving on: After checking out Polish capital Warsaw for a bit, grab a bus to Vilnius (seven hours, £15), or you could fly from £67 with Air Baltic. 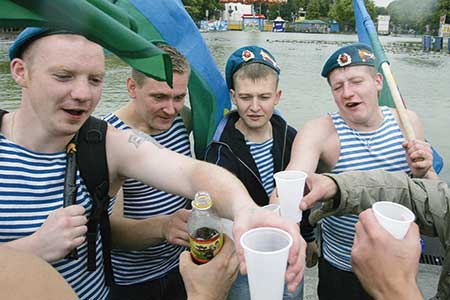 The lowdown: Full of cobble-streeted capitals, pumping nightlife and harrowing Soviet history, the trio of Baltic states –  Lithuania, Latvia and Estonia – are like the up-and-coming hipster kids of Europe. There’s cool bars aplenty, while still a good eye for days gone by, thanks to the ever-present medieval spires and timeless old towns. Like Prague, the capitals have become slightly synonymous with pissed-up Brits flying Ryanair, but don’t let that put you off.

Highlights: In Lithuania’s capital Vilnius head to the Genocide Museum for a sombre experience learning how the Soviets would torture Baltic freedom fighters. If you’re into diving, head to the west and northwest coasts of Latvia, where dozens of Soviet and Nazi wrecks remain below the surface (poseidon.lv/en/). Make sure you also check out the views from the top of the tower at Riga’s spectacular St Peter’s Cathedral. Little old Tallinn is probably the pick of the bunch. Its medieval old town includes buzzing squares, sea views, cobbled lanes and dozens of cosy cafes and boutiques.

Moving on: Get the ferry from Tallinn to Helsinki for £20. It will take from an hour-and-a-half to three hours, depending on what you’re willing to spend. 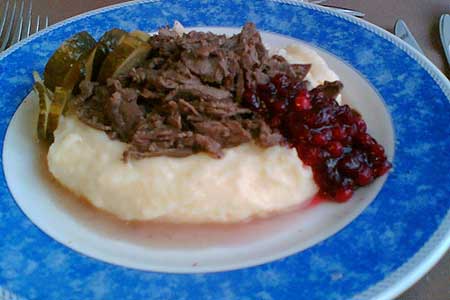 The lowdown: A global capital of cool in more ways than one, capital Helsinki is not just a bit on the chilly side, but also a world leader in the field of design and architecture. While not as immediately stunning as its neighbours St Petersburg and Tallinn, this more subtle meeting point of Eastern Europe and Scandinavia will still win you over (while stylishly, smoothly emptying your wallet).

Highlights: Have no doubt that Finnish prices will leave you bankrupt at the bar, so try to keep your sightseeing costs down. Head to the World Heritage-listed (and free, except for the ferry) Suomenlinna Fortress for lavish grounds, galleries and even a museum that’s a submarine. Also visit the Hakaniemi Market Hall to try local faves such as reindeer meat, before taking pleasure in the Finnish obsession with saunas.

Moving on: Book the high-speed Allegro Train to St Petersburg (four hours), from £78. 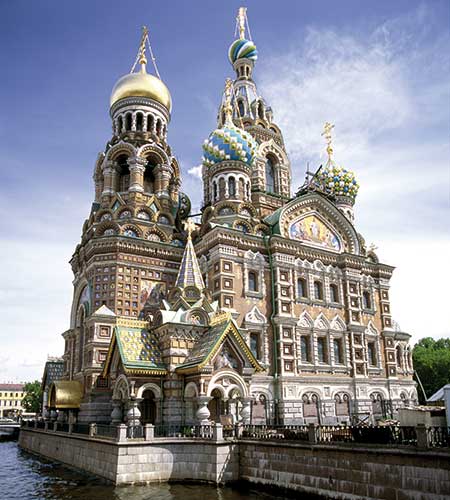 Memorial: Church of The Saviour on Spilled Blood in St Petersburg

The lowdown: St Petersburg, regularly dubbed the Venice of the north, is not just Russia’s cultural capital, but also its most beautiful city, packed with grand palaces, magnificent museums and fantastic nightlife, plus one or two canals. However, bear in mind that visiting Russia involves the major hassle of needing a visa. These cost a staggering £115 for Brits and slightly less for Aussies and Kiwis.

Highlights: Cram-packed with one of the world’s best collections of art, including a few Leonardo da Vincis and Pablo Picassos, you’ll be able to spend hours in the sprawling Hermitage, which includes the epic Winter Palace. Then there’s the iconic coloured domes of the Church of The Saviour on Spilled Blood, built as a memorial to the murdered Tsar Alexander II on the site he was assassinated. While in town try to get your hands on tickets for the Mariinsky Theatre to knock back champagne and caviar between performances of some of the world’s best ballet.

Moving on: One-way flights from St Petersburg to London (three hours) cost from £103 with Air Baltic. 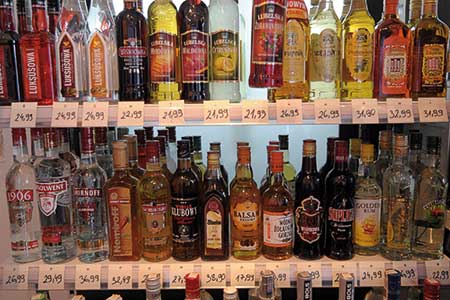 Eastern Europe might not be famous for its dinnertime delights (think dumplings, potatoes and cabbage), but that doesn’t mean there aren’t delicacies to be found. Besides, try enough of the region’s favourite tipple and you might not be too bothered…

It’s for good reason the strip of northeastern Europe that includes Poland, the Baltic states and Russia is often labelled the ‘Vodka Belt’. What tea is to the English, here it’s all about the vodka. It’s everywhere – ranging in price and quality from stuff that’s cheaper than water and almost impossible to drink to some of the finest booze you’ll drink anywhere on the planet.

Whatever you do, just don’t mix it with anything. It’s straight or, well, you probably shouldn’t be in a bar. Each country has its local version, but Russia and Poland are the real daddies, with early records from the 1400s suggesting the drink was once called ‘gorzalka’, or burned wine.

Ranging from super cheap to ludicrously expensive, but unlike vodka, the cheapest caviar is still tasty. It’s distinctive, but not unpleasant, and definitely livens up the sometimes stodgy food. In case you’re wondering, caviar is fish eggs. Possibly some of the best fish you’ll ever eat is smoked omul fresh from Lake Baikal.

This region gets bloody cold and nothing satisfies more than a hearty meal. Expect plenty of beef, lamb and pork. Dishes such as pork tongue, reindeer and elk steaks are also on menus, as is, occasionally, bear. As such, beef stroganoff is a regular classic.

Invented in Russia, for the super-wealthy Stroganoff family, it’s a delicious, creamy beef stew. Another staple to expect plenty of is borscht (or barszcz in Poland), a soup made from beetroot which normally includes stewed meat. It tastes much better than it sounds (and looks).