Could Doha be the next Dubai? Living and working in Qatar’s cosmopolitan capital city

Doha is not short of job opportunities. The capital of Qatar, neighbouring Dubai and Abu Dhabi in the UAE, is one of the world’s fastest growing cities, and it’s desperate for skilled labour to keep up the pace. 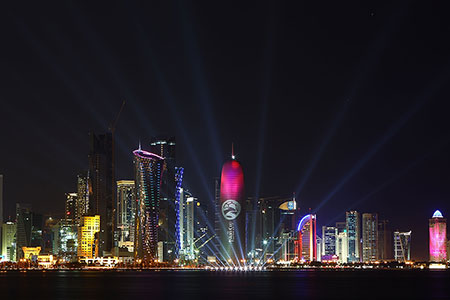 Fifty years ago, Doha was little more than a stretch of sand. Today, it is a booming, beachside metropolis. Construction moves so quickly, it feels as though you could blink and suddenly find a new tower looming overhead.

“It’s like being on a rocketship,” says Susie Billings, 45, an Australian consultant who has lived in the city for six years. “Everything is taking off, and there’s investment in so many different fields. There’s a real chance to get involved, get your hands dirty, and make something happen.”

The breakneck speed of development in Doha also means that there are lots of opportunities for growth. “If you’re willing to put your head down and work hard, you can move up the ladder pretty quickly,” notes Scot Euan Berry, 31, who works as cabin crew for an airline.

One of the main draws, though, is the tax-free salaries. According to Darren Thompson, the manager at recruitment agency Huxley Associate’s Doha branch, expat salaries average around £3000 per month, and often, those come with added perks, such as housing allowance and yearly return tickets home.

“The salaries in Doha are generally globally competitive, and the cost of rent, gas and electricity is sometimes borne by the company,” says Berry, adding, “in fact, my only outgoing in a month is the £40 I spend on internet.” 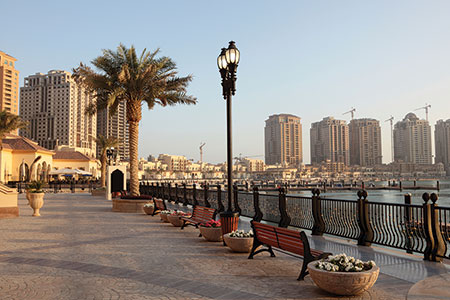 As one might imagine, gas and oil are the mainstays of Doha’s economy.  “Qatar is the number one supplier of land gas in the global market,” notes Thompson.

The country has taken its energy revenues and invested in a soaring infrastructure. As a result, the city is in desperate need of people to not only build it, but run it. Engineers and finance types are in high demand, as are PRs, teachers, accountants and people with hospitality experience.

Finding work, adds Thompson, is not difficult. “Just get in touch with a couple of recruitment agencies, and describe you skills and experience.”

The only thing that might bar you from finding potential work, he says, is showing a lack of commitment or knowledge.

“If you’re just dipping your toe in the water, and you can’t say a single thing about Doha, you won’t get past the first stage,” says Thompson. “Do some research before.”

However, warns Billings, Doha’s human resources sector isn’t as developed as it is in the West.

“Your employer may have more power than you’re used to,” she says, adding that companies even have control over exit visas, meaning any time you want to leave the country, you have to run it by your boss. “Pick your employer wisely and know what you’re getting into,” she advises. 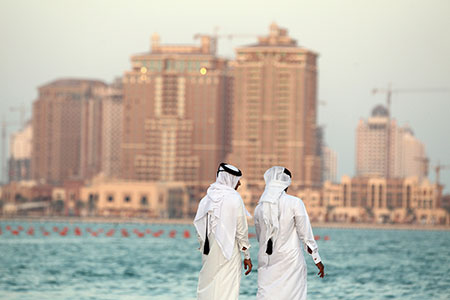 Doha may not be a haven of nightclubs, yet, but it is ideal for outdoorsy types. It’s flush with beachfront, and expats can be seen riding jetskis or paddleboarding down by the marina.

There is also an Australian football team in Doha, called the Doha Kangaroos, who compete regionally. “They were runners up in the grand final this year,” Billings tells us with palpable pride. 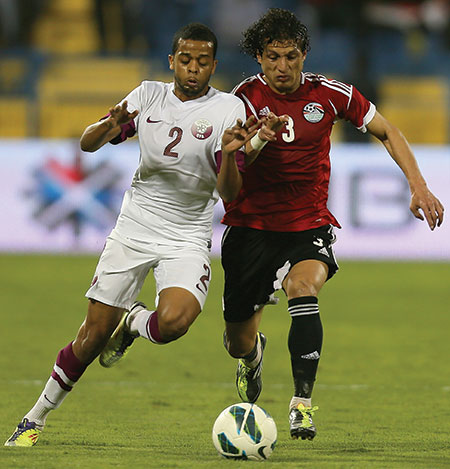 Work visas are issued by employers, but if you find work (even from abroad), getting one sorted shouldn’t be difficult. For those who want to find work on location, two-week tourist visas can be acquired at the airport. Visit onlineqatar.com for more info.

Not all companies pay for housing, and rents can be pricey. The most basic two-bedroom flat will set you back £1200 a month. One drawback of speedy development is also shoddy construction.

“Expect crooked walls and sloppy tiling,” says Euan Berry. Al Mansoura, Najma and Al Sadd are some of the best areas for young expats, as they’re close to local shops and restaurants, and never far from a taxi. For high-end digs, check out the flats on artificial island The Pearl.