Could this be the most dangerous zoo in the world?

A moment before, the tigers had seemed to enjoy interacting with each other and humans, but now all hell broke loose as they fought between each other over food. A few minutes later, the tigers returned to a more relaxed state, but the girl in front of us looked terrified and refused to go in. This could only mean one thing; it was our turn to enter the pen.

The nervous feeling in my stomach passed as I slowly crouched down beside the white tiger. He permitted me to spend some time in his presence and stroke his stomach as he lay on his back. His short fur felt soft and smelt musty in the hot Argentinean heat.

He even lifted his leg and directed me to the areas that he wanted me to tickle, a truly humbling and exciting experience. All my misconceptions about tigers vanished in the light summer breeze. 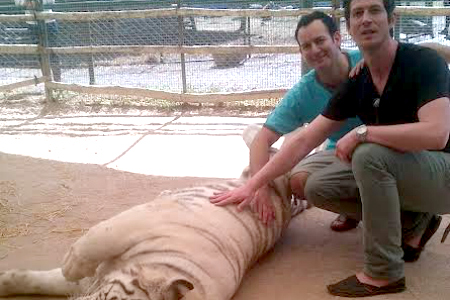 The next queue we joined was for the king of the jungle, or in this case, for two lions; one basking in the sun on the ground and the other laying on a platform lightly roaring every once in a while. Entering the pen and approaching the lion felt quite intimidating due to the lion’s sheer mass, but on drawing nearer I reached out and stroked his mane and back.

His body felt strong, every inch was covered in muscle, and unlike the tiger, his short fur felt coarse. The memories of that moment will undoubtedly never leave me.

A short coach journey from the centre of Argentina’s thriving capital city Buenos Aires is the most dangerous zoo in the world, Zoo Lujan. What attracts the many visitors is that you don’t just get to look at the animals through cage bars, but you are allowed inside the pen to touch the animals.

Zoo Lujan is spread over a large area with lions, tigers, bears, elephants, monkeys, pumas, bears, llamas and deer. Not all the animals are in pens and many of the well-behaved animals wander about the grassy areas in groups. The closest we came to an attack was under the watchful eye of the geese that made it their daily duty to go after everyone carrying a bag  below waist level, on the lookout for food.

The zoo was the brainchild of Semino, who started Zoo Lujan with just two tigers and a lion that had been in a circus previously. In the zoo’s twenty years history, there has never been an accident. Animal rights activists campaigning to close the zoo argue that at some point an animal will maul someone, as it is in their nature, and accuse zookeepers of drugging the animals to keep them calm.

Semino had always dreamed of breeding animals calm and domesticated enough to enjoy the company of humans. In the final days of the animal’s pregnancy, the animal is cared for by the zookeeper who massages her, gives her loads of attention and eventually assists with the delivery of the cub. The cub’s first contact is with the zookeeper and the relationship is developed prior to feeding. The cubs are lined up to be fed and placed by a nipple to steer them away from learning early aggressive behaviour. The key with the lions and tigers is to make sure that they don’t go hungry.

From day one, the zookeeper continues constant close interaction; the elephant keeper sleeps in the pens with the elephants to build an everlasting bond between them. Within a week of birth, the cubs are introduced to trained dogs that keep them in place and don’t allow them to get out of hand. Watching this reminded me of sheep herding.

Most visitors seem delighted to get up close and personal with the animals. The website and various review sites like Tripadvisor show hundreds of photographs of happy people with the animals. There are other zoos around the world that offer the same experience, but none that love and care for the animals like they seem to at Zoo Lujan.

My advice? Go as soon as you can.

Woman and child killed in double shooting in Essex