Creative energy: Holiday destination Christchurch offers a blend of the old and the new

These devastated the CBD and much of the surrounding city, shaking its 380,000 residents to the core.

However, New Zealanders are a hardy lot. There’s a creative mentality (locally referred to as the ‘number 8 wire mentality’) that runs through Kiwis. Cantabrians exemplify this in the way they’ve adapted their devastated surroundings into a liveable (and marketable) city.

Innovative ideas have popped up all over the city – and show no signs of stopping as the people make the best of the hand that’s been dealt to them.

It’s been a rough road, but through adversity comes strength and the city has that in spades. It also has some pretty good attractions, too. The city’s by no means perfect, but that’s the charm of visiting here. The people will welcome you, share their stories of surviving and thriving in the wake of a natural disaster, making a journey around Christchurch a one-of-a kind experience.

Here’s a few of the Christchurch attractions you should check out next time you’re in New Zealand. But be warned: by the time you arrive, there’s likely to be a whole lot more that you’ll have to discover yourself. Check out  christchurchnz.co.nz for all the latest. 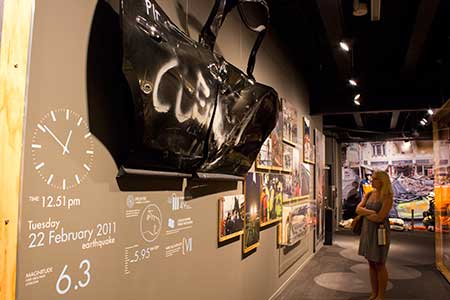 The charitable organisation Gapfiller brings events and activities to the city’s vacant land.

The latest innovative ‘filler’ is a mini-golf course, which has its holes scattered throughout the inner city. Each of the nine stops provides information including an image of the building once upon the site, a tangible reminder of pre-quake Christchurch. What will you card as you learn your way round each quake spot?

Next, take the 100-minute Transitional City Audio tour. Explore part of what was once the CBD on foot, discovering both notable and obscure sites, buildings and landmarks.

The project was inspired and created by Cantabrians involved in fine and creative arts, geography/planning, architecture, and landscape architecture.

This is no lecture, though. They have developed an extremely human commentary through a combination of personal stories and historical and contemporary geographical and architectural information.

Green among the grey

There’s a reason Christchurch has always been known as the Garden City.  Landscape design, green space and outdoor environment were always paramount in the design of the city.

The quakes haven’t dampened that spirit. Greening The Rubble has created temporary public parks and gardens on sites of demolished buildings, usually in commercial streets. Just keep your eyes open and you’ll come across them before you know it.

Check out the Mini-Park, which, by the time you visit, should have been relocated to the central city. Also, seek out the three-dimensional green roof project at Cramner Square. Who would have thought such awesome green spaces could be created in the middle of a city?

Greening The Rubble is always looking for volunteers, so if you’re feeling charitable, give them a call and roll up your sleeves. This is volun-tourism at its most real. 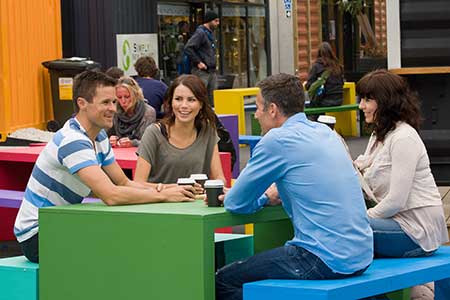 Shop with a difference

Re:Start Mall, an icon of the Transitional City of Christchurch, is unlike anything you’ve seen before. It’s a shopping mall made up of colourful shipping containers, set in a funky landscaped area – and is a must-see when in Christchurch.

With the “Harrods of Christchurch”, Ballantynes set as the anchor, there are quality retailers, delicious food outlets and entertainment everywhere you look.  There’s even free wi-fi – but you won’t want to waste too much time on the web, as there’s so much going on around you.

Re:START opened in October 2011, and it orgnisers have confirmed the mall will stay until at least March 2014.Check out Johnsons Grocery Store, a feature of Christchurch since 1945. It specialises in imported treats from all over the globe. Toi Toi and Hapa both have a range of awesome Kiwiana to take home to friends and family.

To make the most of your visit, head down on Fridays, Saturday s and Sundays for the colourful Re: Start markets, which take place from 9am to 4pm. Who knows what bargains you’ll score. 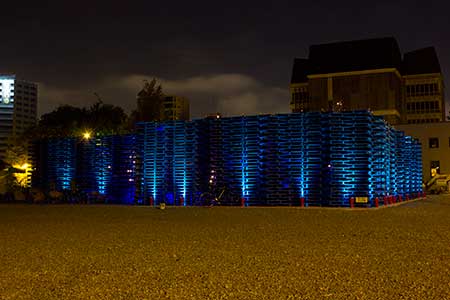 Pop-up bars are now synonymous with international cities – think London and Sydney – and now Christchurch has got in on the act. When the quakes hit, Christchurch lost many of its hospo venues, but the people got creative yet again. Shipping containers and old buses were put to good use.

Seek out funky, quirky and innovative spaces, like Cargo Bar, set up in a shipping container and serving drinks in jam jars. Revival Bar features chairs and couches made out of suitcases, and can be moved within days as the building scene changes around it.

Also, seek out Smash Palace, a colourful rough diamond set up in a vacant lot. These and many more of the cities bars have all created their own niche market and continue to be very popular and successful.

There’s too many to list here, so talk to the locals and have fun discovering one that suits your tastes.

Punt down the Avon

Your punter, resplendent in braces, blazer and straw boater hat, will guide you down the Avon river.

You’ll relax as you glide over the water’s surface, touring through the beautiful Hagley Park, admiring the pretty river banks, feeding the curious ducks and marvelling at the sun sparkling on the pristine water.

Punting takes place all year round. During winter, you’ll be given a blanket and hot water bottle to stave off the icy chill. You’ll also get to lie back on velvet cushions as your punter fills you in on the route’s history. It’s all very European – and a great way to get a different perspective of the city. The Christchurch Gondola, which only recently re-opened, whizzes you almost a kilometre up to the city’s Port Hills. There you’ll find a collapsed crater rim of an extinct volcano that erupted about six million years ago.

Looking out to the west, you’ll be able to see the breathtaking Southern Alps and to the east, the ocean and the sky stretch as far as your eyes can see. Magic stuff.

At times, birds will fly beneath you as you take in the 360-degree views. This is another awesome way to get to know Christchurch. Don’t forget your camera. The famous Christchurch Cathedral may have been partially demolished in the wake of the quakes, but that didn’t stop locals building something equally interesting.

The Transitional ‘Cardboard’ Cathedral – designed by Japanese architect Shigeru Ban, who gave up his time for free – seats 700 and also houses concerts, exhibitions, and community events.

The new Cathedral uses everything from cardboard tubes to timber beams, structural steel and concrete. It is the biggest of the city’s ‘emergency structures’ and when finally completed will also be one Christchurch safest buildings. It is being built to last more than 50 years and will comply with 100% of the earthquake code. You won’t see anything like this, anywhere.

A smooth 90 minutes’ drive north of Christchurch will provide your adrenaline fix for the journey.

Jump on a quadbike and explore the landscape as you tear across a purpose-built track through streams, across meadows and into rugged bush on the huge Woodbank Station, a working farm.

Or work a bit harder by taking part in a mountain bike tour around the area. You’ll need to rest after that one, though, so hit the Hamner Springs Thermal Pools and Spa for an evening of pure relaxation.

There’s also archery and claybird shooting to test your skills at, but make sure you do that before, and not after, you’ve indulged on one of the many wine trails. The vineyards in the surrounding areas produce some very nice reisling, pinot noir, chardonnay and sauvignon Blanc.

For the genuinely hardcore, there’s bungy jumping, rafting and jetboating on the Waiau River. Give it a go. You are in new Zealand, after all.

It’s all over! England fall to 5-0 Ashes series defeat on day three of the final Test in Sydney