In Bonjasky’s case, he’s a reformed banker who looks like someone on a billboard flogging men’s underwear, and he even once ran down a group of loons shooting darts from a car – they’d stupidly hit him with one – and got a medal of honour from the police.

After our chat, though, I wouldn’t call him anything that would risk offence.

Firstly, he’s renowned for his ability to floor opponents with a swift kick to the head they don’t see coming, or worse, his spectacular flying knees – and they look painful. Secondly, he’s just so damn nice.

After watching many fight clips before this interview, I comprehend the flying bit – he routinely absorbs a few punches from an opponent before lunging airborne with a pronounced knee and suddenly only one of them is standing – but the other side? I ask, are you really a gentleman?

“It’s not that I’m trying to be a gentleman, but when people are comparing me to other fighters, they see me as a gentleman,” he says, with a charming hint of discomfort.

“Me compared to James Bond, I wouldn’t be a gentleman.”

Could it have something to do with you looking like a Calvin Klein model? 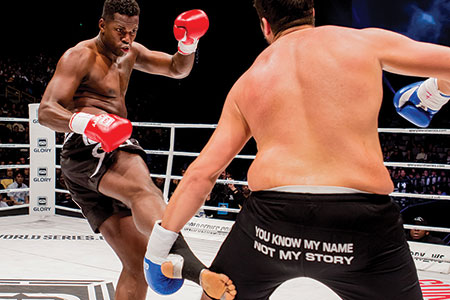 “I don’t want to say that, but yeah, people say I don’t look like a fighter,” says the former ABN Amro employee and mortgage consultant. “And they say I talk normal, a decent guy and not like a fighter.”

I later discover he and Dutch Olympic gold medallist Inge de Bruijn have been faces for lingerie brand Sapph since 2010.

Londoners get a chance to see the Suriname-born Dutchman Bonjasky, 37, in full flight at Glory 5 at ExCel London on March 23.

He’ll take on countryman Tyrone Spong, 27, in a heavyweight bout that will headline an 11-fight line-up of K-1 kickboxing – basically a more free-flowing form of muay Thai or kickboxing which allows knees and elbows. 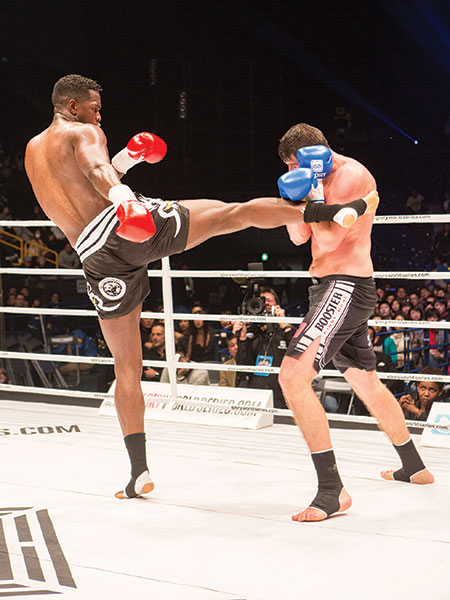 Both fighters moved to the Netherlands at age five from Suriname, in the north of South America, but that’s where the similarities end.

University-educated Bonjasky is a pin-up out of the ring for the sport most massive in Japan and a legend inside the ropes as a three-time world Grand Prix Champion (2003, 2004 and 2008).

However, this is just his third fight back since a three-year lay-off thanks to injury. Spong is covered in animal tattoos, breeds pit bull terriers, and is better known for his punching – he trains with boxer Floyd Mayweather.

He is the next big thing. “Fans have wanted to see a fight between Remy Bonjasky and Tyrone Spong for some time,” says Glory CEO Marcus Luer.

“Bonjasky is an idol to fight fans around the world and Spong has been on a steady rise to the top, he’s a fighter that everybody is talking about right now.

“Bonjasky’s flying knees and Spong’s hands are capable of stopping a fight in an instant – don’t blink.”

Bonjasky’s preparation for this fight has anticipated an onslaught from Spong. “Tyrone’s a youngster who will fight forward, so we’re looking out for that.

We’re planning a different approach. My sparring partners have been attacking me constantly and keeping me busy, so I’m prepared for that from Tyrone.” 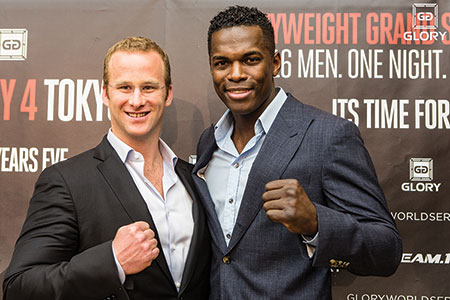 Spong will be wary of the famed airborne attack, inspired by Jean-Claude Van Damme and developed in muay Thai.

“When I did muay Thai I always did the flying knee,” Bonjasky says.

“Jumping up like that as a heavyweight is not something they all do, so when I could do it I loved it and really trained on that.”His journey to K-1 status started when a broken leg playing football as a teen led him to give the game away.

He came to kickboxing like most kids come to anything, a few mates and a bet. In this case, it was whether a famed Van Damme move in the fight classic Bloodsport was possible.

“At school, we argued about when Jean Claude jumps up and does some flip flops (flicks his feet a few times) and before he lands seven guys are knocked out,” Bonjasky laughs.

“Some of the guys thought it could be done, others didn’t. One of the guys was doing kickboxing and said let’s go to a class to see.

We went, I joined the group and from then on I loved the sport.”So was the move real or not? “Sadly, it’s not real.” But you’re renowned for your flying kicks, if anyone could make it real …

“Yeah, but when I kick someone it’s going to be one kick, one action and that’s it.”

By “that’s it”, he means they’ll be knocked out cold on the canvas and he’ll have his arms raised aloft.

This is the same guy who’d previously spoken about his close mother-son relationship – it was on her advice he pursued uni and work before going pro at age 25.

“She said I should always have a plan B.”He’d also spoken about his motto, “Train hard, fight easy”.

For Bonjasky, it appears things come quite easily, but hard for his combatants. Spong will have his say on that, though. 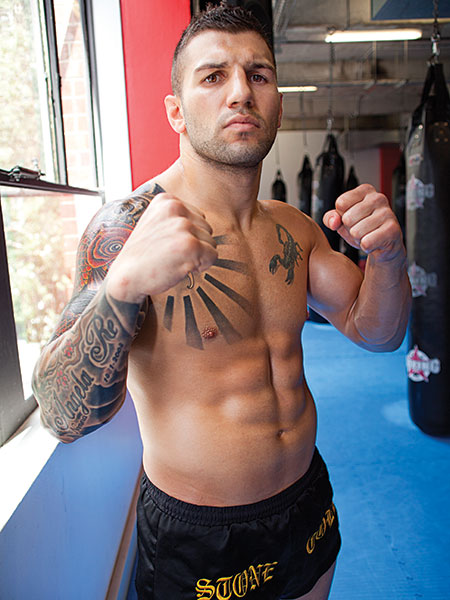 Aussie ‘Stone Cold’ Steve Moxon is a dream for fight fans, a dynamic bruiser no stranger to knockouts.

The 25-year-old from Victorian country town Ballan, a fully qualified infantry soldier in the Australian Army, will be the undoubted villain though when he takes on Brit Jordan Watson at Glory 5 in London on March 23.

“I love the pressure; it always makes me push harder,” he says, happy to play that role.

“There is always a healthy rivalry between Aussies and the Poms in all sports, so I’m keen to keep the tradition going.”T

he lightweight bout will be highly anticipated, with Watson, out of Leeds, one of the UK’s brightest talents.

“He is very fast and accurate,” Moxon says.

“I need to look out for kicks, kicks and more kicks.”Watson will have to be wary of Moxon’s undoubted power – he’s won 20 of his 31 fights via knockout – as he makes his debut in the world-renowned Glory stable.

Hardly a household name in Oz, he’s keen to build his image inside the ring and takes his nickname from a master of showmanship, WWE legend Steve Austin.

“This is my job. At the end of the day I’m signed to the biggest kickboxing promotion in the world, so that’s credit enough,” he says.

“My goal is to be a sports personality, not just another fighter.”

Why not come up with your own name?“I’m a Steve Austin fan from my days playing in the school yard,” he says.

Making shadow to the Gherkin