A footpath stretches straight ahead, but the trail I’m following spirals downhill, careering into a busy road.

I’m trying to reach the South Downs Way, all 100 miles of which I plan to cycle during the next three days.

Stretching across chalk hills from Winchester, Hampshire, all the way to Eastbourne in East Sussex, the South Downs Way – recognised as an area of outstanding natural beauty – passes the Devil’s Dyke, a valley English folklore claims was formed when the devil booted the Isle of Wight from the mainland.

Whether I’ll ever reach this landmark, however, is anyone’s guess, as right now I’m struggling to find the start point. Someone, or something, is having a laugh.

It’s less than an hour since I hopped off the train at Winchester, and as splintered asphalt finally transforms into track, I stop to strip extra layers.

Two more riders zip past, and I follow to bumpy Cheesefoot Head, an impressive natural amphitheatre in which crop circles have been appearing since at least the Eighties.

The most recent was an intricate Tibetan Buddhist symbol, the ‘endless knot’, spotted in the soil in August. The work of aliens, perhaps? Or country folk with too much time on their hands?

The South Downs’ long-distance track passes an impressive array of notable English landmarks, so I push on in the direction of the many more that lie beyond Cheesefoot Head. But 40 miles into the ride, I’m wilting. 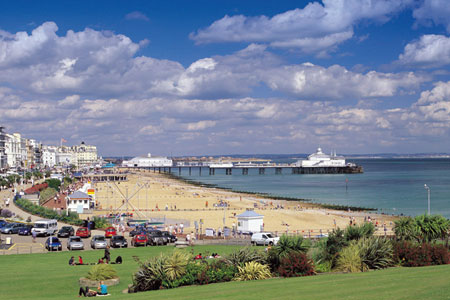 It’s seven hours since I started out and arduous climbs at Cocking, Harting and Heyshott Down south of Midhurst lie just ahead.

As I ponder these difficulties, I’m surprised and distracted by the pungent scent of wild garlic and its stark-white blooms, which line the rolling track.

Ten miles on, I detour south to Arundel Youth Hostel, glimpsing the town’s medieval castle. It’s further than I thought and I’m just in time for dinner.

Day two brings Chanctonbury Ring, named after a circle of beech trees planted atop a hill in 1760. The Romans worshipped here and it’s a popular day trip for walkers and cyclists. The route meanders gently over open hilltops for the next 20 miles. The only sounds are the crunch of tyres on loose stones and a skylark tinkling its breathless song.

The track across the River Adur at 61 miles wiggles confusingly on and off tarmac. But soon I’m tackling the set of hills leading to spectacular Devil’s Dyke.

I’m flagging after the fifth but am wowed by views from the Dyke itself. Below me stretching west and north is the vast, farmed plain of the Sussex Weald, a flat expanse of land scattered with tiny hamlets that appear to float in a green and yellow sea. 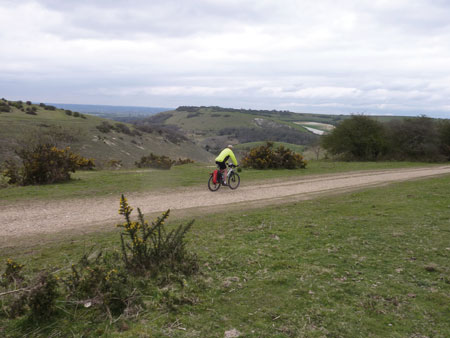 The chalk-white South Downs Way is behind me, skating rural pastures typical of southern England, then emerging from the Adur Valley like a slithering reptile, snaking back to Chanctonbury Ring. Five miles south-east is glitzy Brighton, and the sleepy Isle of Wight is a faint outline at sea.

I bounce past rabbit holes and prickly scrub, skidding downhill, then find myself pedalling uphill once more to 248m-high Ditchling Beacon and the 70-mile point. From here, I drop south to Hove for the night, waking to cloud and rain.

Mist holds fast for much of day three, shrouding the Long Man of Wilmington, a 70m-long figure carved into the chalk slopes of Windover Hill.

The Long Man’s origins are unknown, but records show he dates back until at least the 1700s. I vow to return to see him in sunlight and pedal on into the last eight miles.

It’s been a tough but triumphant 100 miles, empty and bucolic at times, often wearing, but, more than anything, fulfilling.

There are scores more UK trails to ride, but the strange histories and spectacular sights along the South Downs Way are at the top of my list. Next time I’ll do it the other way around. 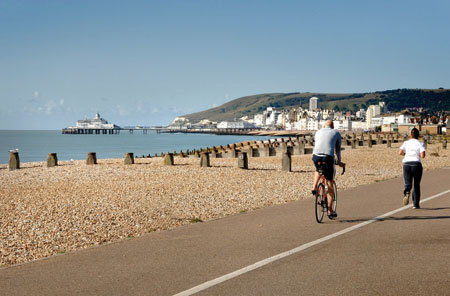 Sleep: Moonlight Cottage in Cocking is a convenient, slightly twee stop about 35 miles into the route. B&B is the cheapest around, from £50pppn.

Evening meals available (mains from £10.50) and for £5 they’ll pack you a lunch. The adjoining tea room is closed thanks to a burst water pipe.

YHA Truleigh Hill is located just before Devil’s Dyke, tucked away among rambling greenery and and offering great views of the South Downs and Sussex Weald. Rooms from £37pn, dorm beds from about £14pn. 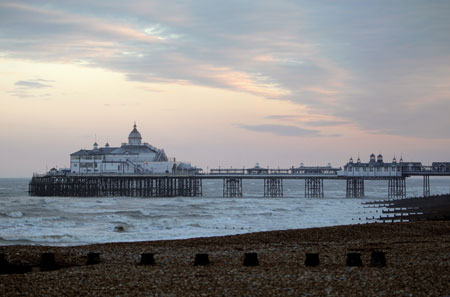 Single train fares from London Waterloo to Winchester cost from £31.50. Singles from Eastbourne to London Paddington cost from £5. eastcoast.co.uk