I’m halfway up a 22m-high manmade wall of ice, a harness around my waist and thick boots with crampons on my feet when my shoulders start burning and my left leg begins to shake.

“Yes, continue! Up, up, up!” yells my instructor, Damien, as I try to push my foot into a groove and drive one of the axes I’m holding in each hand into a tiny hole in the ice – all in the hopes that I can haul myself up just another few inches.

Thank god I’m trying ice climbing for the first time in the relative safety of Champagny en Vanoise, about a 45-minute drive from nearby ski resort Meribel in France, where I’m staying.

Having been skiing before, I was keen to attempt a different winter sport. Now I’m questioning the wisdom of this adventurous spirit.

Of all the cold-weather capers you can get involved in this winter, it’s fair to say that ice climbing is one of the more extreme.

As Etienne Grillot, a French expert who works in Champagny en Vanoise, explains: “Ice climbing is dangerous. Firstly, the ice is ‘alive’; depending on the temperature, it can be rigid or flexible.

If it’s too hot, the ice is not strong enough; too cold, and the ice can be brittle. Violent changes of temperature can be very hazardous.” That’s why your first forays into the sport are best on a man-made wall.

“It’s safer to start on our ice tower because anchors are already fixed onto the structure and there’s no avalanche risk,” Grillot says. 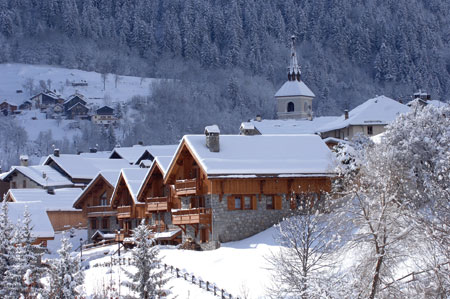 But don’t think that means getting up the ice tower is easy. I’ve scaled an indoor climbing wall before and this is far scarier (not to mention colder).

There are no hand or foot holds for you to rely on, just small grooves in the ice that you have to trust you can cling to.

Although it’s easy to use my arms to hack into the ice, what’s more problematic is making holes deep enough so that the axes don’t slip out.

Damien has assured me that, even if I’m not immediately good at this, the process of learning to climb will help me get to know my body better.

As I progress, I also begin to realise that the noise of my crampons and axes inform me of the quality of the ice – something that becomes very important when climbing natural icefalls, where there are so many different types of ice and always a risk of avalanche. 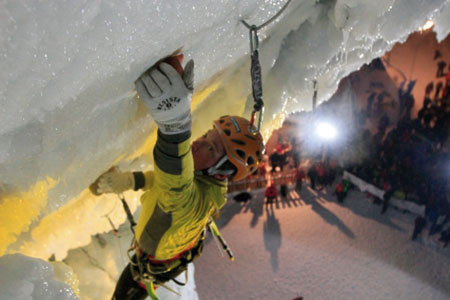 Ice climbing on a manmade wall is also perfect for beginners because it’s vertical, rather than providing an overhang. During the Ice Climbing World Cup, held here in February this year, climbers were faced with a 40m-long overhang.

Competitors win by scaling the ice in the best possible route and the least possible time. Not something I’m quite ready for.

Suddenly, the crampons on my boots scrape and slip. One leg dangles uselessly in mid-air. I push the other leg further into its hold and grip the axe handles harder, driving the hanging foot back into the ice and forcing myself to believe I can do this.

My muscles ache and my heart is pumping. I’m halfway up, and I start to think this could be far enough. My two travelling companions have tried, and failed, to reach the top. What would be the harm in calling it quits? 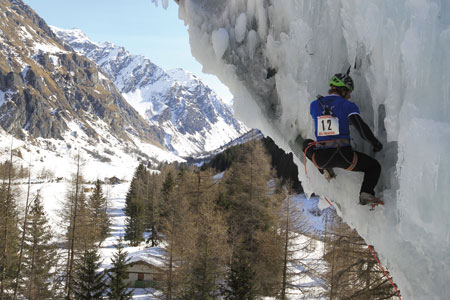 The thought flickers for a moment, then disappears. I’m determined to reach the summit. Without a word, Damien tightens the rope, giving me a little help and allowing my terrified disco-leg a rest.

The slacker the rope, the less supported I am; it’s meant to act as a safety mechanism rather than an aid. “Go on! Just a few more metres and you’ve done it!” he yells.

I mutter something uncharitable under my breath and carry on, taking the odd moment to look around me at the endless white hills. It’s incredibly peaceful up here and, for a moment, I’m struck by the silence in my head.

All focus has been on my body, coaxing it into action, convincing my muscles they are capable. But now, for a blissful few seconds, the mental chatter has stopped. Before I know it, I’ve reached the top.

Damien cheers. I edge backwards over the ledge, trusting that the harness will catch me. It does; now I’m abseiling down, a hell of a lot quicker than I went up. I hit the ground, take a breath and say: “Have I got time to go up again?”

Ice climbing from about £30 per person for two hours (including instruction and equipment) champagny.com 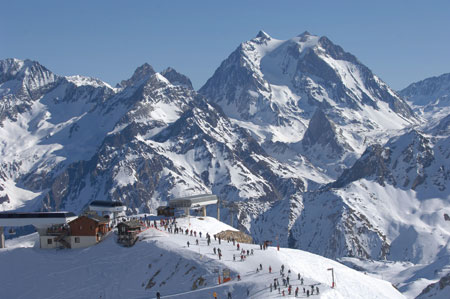 Luxury: Find Le Chaudron in the middle of the slopes in La Plagne (a 45-minute drive from Vanoise National Park) for a big fireplace, typical mountain atmosphere, and delicious food served fast – on a sunny balcony if you’re lucky. Meals from £18. (Montchavin 73210, Montchavin-Les-Coches, tel. +33 (0) 47909 2333).

Budget: Lodge de Village in Meribel has live music every other night and offers an electric après-ski atmosphere. Crowd surfing and toffee vodka drinking is the norm, and drinks are considerably cheaper than you usually find in Meribel. Beers from about £4.

Midrange: There’s no doubt that Meribel, situated right in the heart of France’s Three Valleys ski area, is like a homing beacon for Brits. As such, there are a number of Brit-style pubs, including Jack’s Bar, one minute’s walk from the main ski lift area of La Chaudanne. Beers are about £4 during the daily happy hour from 4-5pm.

Budget: Residence Les Ravines are self-catering apartments right in the centre of Meribel town. Seven-night packages start at about £484 per person including return flights, accommodation and resort transfers – shop around for the best deal. (Méribel Cedex, 73552).

Midrange: Fish & Pips’ chalets are comfortable, welcoming and serve superb, award-winning food. Holidaying here ranges hugely in cost, from between £550-£1200 per person – depending on the chalet and time of year – for seven nights, but includes a lot, such as all-inclusive catering and booze.

Luxury: Opening this December, Le Kaila will be ideally located in the centre of Meribel, and is the area’s first five-star hotel. Perhaps most luxurious is the spa, a 500sqm haven of peace and pure pleasure. Prices start at about £340pn on a half-board basis.

Video: How long does it take to travel 80 miles if you’re travelling at 80mph?

YOUR SPORTS WEEKEND IN A FLASH: All the results that matter in one click (Week ending Dec 22)