Cycling in Poland – take a tour through the mountains

Cycle around Poland and discover medieval towns, gorgeous countryside, wildlife and Polish vodka. Simon Willmore checked it out for TNT…

Blue skies and dazzling alpine scenery sets the scene for 17 cyclists and their trusty steeds to whizz along country roads, stopping only to take in local churches, museums and pubs. We will cycle up to 38km a day for the next week, and our travels will to take us though the gorgeous Polish countryside, peppered with medieval towns and time-warp villages.

The area is a classic Swiss-style ski resort village, complete with chalets, pine trees and clean air. The only thing missing is the snow, which is fair enough given that we’re visiting during the searing heat of August. That’s right, Poland is not chilly all year as many people mistakenly believe; its summers are balmy and hot. Zakopane offers plenty of activities for the summer visitor, including hiking, climbing, rafting and paragliding. 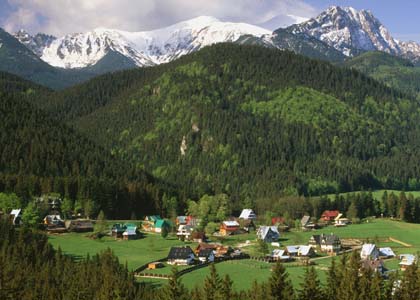 The Gorale people, the ‘mountaineer’ inhabitants of the Tatras, have a strong identity and fascinating customs, which can be experienced on a visit to one of the many traditional restaurants that line Zakopane’s main drag. We munch down on lard mixed with bacon – a lot more appetising than it sounds – or Oscypek cheese, made from smoked ewes’ milk, and served with local bread.

While we eat, Goralski Oompah musicians clad in lederhosen-style outfits play instruments and sing, all inside a building made entirely from timber.

Leaving Zakopane, we take in the contrasting views as we begin to wave goodbye to ski-resort Poland and head towards the nitty-gritty of the rural districts. Every family has its own chickens, its own patch of farmland and, more impressively, its own combine harvester.

We’re frequently overtaken by a fire-engine-sized colossus of a machine. And from time to time, these bad boys are being driven by teenagers. We even see the odd horse-drawn cart along these picturesque country roads.

The joy of cycling is that you see more than you would if you had to walk, and you don’t get the blink-and-you’ll miss-it experience that you get while driving.

Suddenly, the weather takes a turn for the worse. The rain thrashes down against my face and drips down off my cycle helmet, splashing my already wind-whipped knuckles. The ascent ahead of me is shrouded in a thick grey mist, making the task ahead even more daunting.

I strain my eyes to see through the darkness. I can just make out our tour leader’s neon jacket about 500m ahead of me – surely he’s made it to the summit by now? The light and the weather are so bad I can’t tell if he’s still moving. Has he stopped for a breather? Or has his bike broken down?

I breathe in deeply and propel my legs downwards. The storm-force gale tries to wrench the jacket off my back. Here it is; the challenge we’ve been expecting all week. Inclement weather, adverse inclines.

Okay, so maybe I’m exaggerating a little. That climb was in fact a mere 30-minute period in an otherwise wonderful week of warm weather, and it’s not long before the sun comes out again.

We stop at a church at Ludzmierz, a famous pilgrimage site which houses the Marian Sanctuary, a dedication to Mary by a Hungarian merchant who apparently got lost in the nearby forest and was miraculously led to safety by her. But even more astonishing is the Rosary Garden, which hosted Pope John Paul II in 1997. Just behind the church is a beautiful wooden altar, that looks out over the enormous gardens, where thousands of people heard Johnny P offer the rosary. 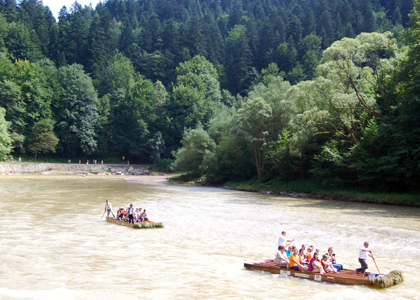 Only accessible to pedestrians and cyclists is the Pieniny Way, a stunning mountain pass carved out of the cliff and running the entire length of the deep Dunajec Gorge, which divides Poland and Slovakia.

We gawp at the jagged limestone and dolomite cliffs which loom above us, dominated by the peaks of Trzy Korony (Three Crowns), the highest point in the range, while waving at those on wooden rafts being guided gently down the river gondola-style. The area is home to a variety of wildlife, including brown bears, wolf, lynx, deer and birds of prey.

A few nights later, a few more kilometres in the bag, and another sod of an uphill climb (this time in sweltering heat), and we make it to Rytro, a feudal village at the foot of castle ruins, on the banks of the Poprad River. We lock up the bikes, check into our hotel on the shady banks of the Poprad, a tributary of the Dunajec, and shower off the sweat and bike grease of another day’s efforts.

But the meal tonight is something special. Freshly-caught trout from the nearby river is wrapped in foil and cooked on the campfire as we all sit in an over-sized summer house-style restaurant. The smoky, succulent fish is washed down with Slivovitz, the local strong-as-an-ox liquor made from damsons which will literally make your eyes water.

The next morning, we park our bikes in a random Polish person’s garden, as is the way, and hike up to the castle ruins. The only thing still fully intact is a flag mast, and the Polish colours are thrown about in the wind like a rag doll, first snatched one way and then the other as it battles against the raging elements.

Back on the bikes, we explore the Rytro area, travelling through the Poprad Valley to the historical town of Stary Sacz where we wind our way around its maze of narrow streets.

Our tour finishes up in Poland’s cultural capital Krakow (see Culture Stop). Having completed the 230km week-long route, I sip a well-deserved Zwyiec, the local beer, and watch as a tram rumbles past.

Fighting for road space are cars and lorries and I feel sorry for the poor buggers on bikes who should be out in the countryside like I was, rather than weaving their way through the potentially lethal city traffic.

In the distance, I hear a marching band, playing Queen’s I Want To Break Free. As I smugly watch the cyclists scrambling their way through the congestion, I can’t help thinking: ‘I bet they bloody do’. 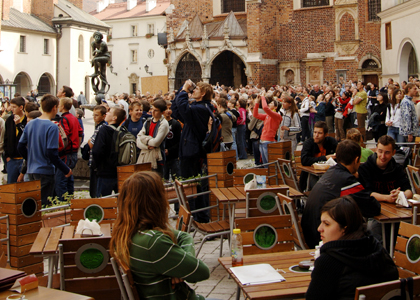 Poland’s cultural capital has something for everyone, from fun-seeking stag parties to historians who come to gaze at the basilica in the centre of Europe’s largest town square. Unlike Poland’s capital Warsaw which was razed to the ground during World War II, Krakow escaped unscathed as the German governor had his headquarters here, so its medieval buildings remain intact.

The cobbled streets of Krakow’s Jewish Quarter are home to a smorgasboard of bars where you can drink neat vodka in one gulp the way the locals do. Poles reckon their vodka is the best in the world. Try Zubrowka as every bottle contains a stem of grass from the Bialowieza Forest.

Day trips from Krakow include a sobering visit to the Nazi concentration camps at Auschwitz, and a tour of the spectacular salt mines in Wieliczka, which date back to the Middle Ages.

WHEN TO GO: Explore run cycling tours in May, June and July.
GETTING THERE: Fly direct to Krakow from London with Ryanair (ryanair.com) and EasyJet (easyjet.com).
GETTING AROUND: By bicycle, of course!
VISAS: South Africans will need a Schengen visa.
CURRENCY: Polish zloty. 1 GBP = 4.8 PLN.
LANGUAGE: Polish.
GOING OUT: A beer costs about £1.50.
ACCOMMODATION: A bed in a dorm starts from £8, while a private room costs from £17.
GET MORE INFO AT: poland.travel

» Simon Willmore travelled with cycle specialist Explore (0844 499 0901; explore.co.uk). In 2011, the Pedalling In Poland small-group tour has departures on May 28, June 18 and July 16. The price is £697 per person, including flights from London, all transport, cycle hire, seven nights’ B&B in hotels and a pension, two dinners and the services of a tour guide.