The Daily Mail published a story saying that Amanda Knox had been found guilty of the murder of Meredith kercher and would be returning to jail. The article went live on dailymail.co.uk and included a detailed description of the imagined scene if Knox’s appeal was lost.

On Twitter, Mail-bashers reacted with glee, unleashing a torrent of wit.

“Perhaps the Daily Mail could produce two editions a day, one true, one made up, and then we could choose which two editions not to buy?” tweeted Andrew Collins.

However the Daily Mail was not alone in jumping the gun and reporting a guilty verdict. The Sun also published a prepared story saying that Knox was guilty, the Guardian initially said in its liveblog that the appeal had been rejected and Sky News also made the mistake. 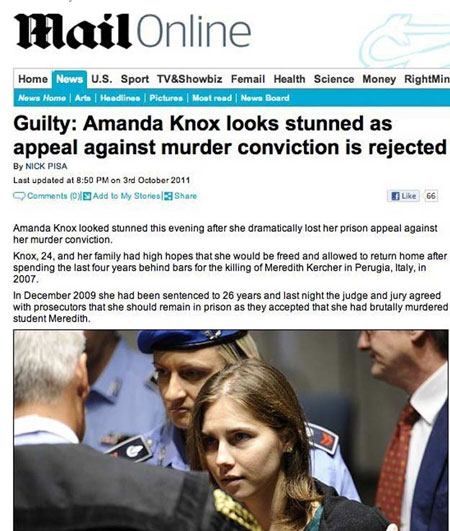 It is common practice for news organisations to have more than one prepared story, based on different outcomes of an event. The confusion arose when the judge began his statement by returning a guilty verdict for a charge of slander against Knox – over accusations she levelled at local bar owner Patrick Lamumba.

In the rest of his statement, the judge announced that the murder conviction had been overturned but by then the Daily Mail, The Sun, Sky News and The Guardian had all published the wrong information.

The Mail is coming under particular fire, however, for its highly detailed description of Amanda Knox’s reaction to the verdict.

"As Knox realized the enormity of what judge Hellman was saying she sank into her chair sobbing uncontrollably while her family and friends hugged each other in tears.

"A few feet away Meredith's mother Arline, her sister Stephanie and brother Lyle, who had flown in especially for the verdict remained expressionless, staring straight ahead, glancing over just once at the distraught Knox family.”

The paper even attributed quotes to those involved in the trial.

"Prosecutors were delighted with the verdict and said that 'justice has been done' although they said on a 'human factor it was sad two young people would be spending years in jail',” the Daily Mail wrote. 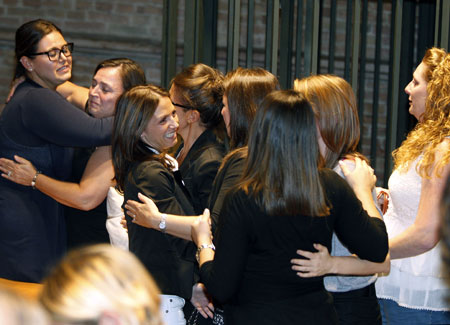 This morning's print edition of the paper reported on the confusion over the verdict, but did not mention its own online balls-up.

“The Daily Mail posted the wrong verdict on the Knox trial earlier? Perhaps they tapped phones in a parallel universe?” said edgarwright.

“Amazing. In case you thought the Daily Mail was in any way believable, a quick reminder of why it's not,” tweeted Joe Crowley.