David Beckham chowed down on bugs as a dare when he appeared on animated talk show 'Take Two With Phineas and Ferb'.

In the family friendly Disney program, cartoon character Phineas asks Beckham: "In all of your travels, have you ever eaten anything weird like bugs?"

"No never tried them." Beckham responds

"For ten dollars I will eat anything" replies Beckham before throwing the creepie crawlies down his throat and grabbing the ten dollar bill. 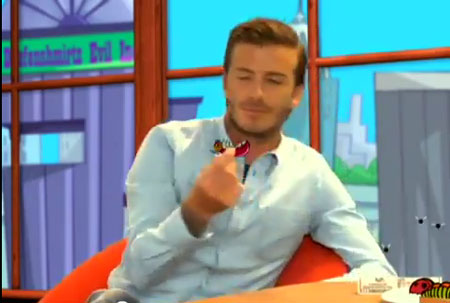 It probably helped that the bugs were just animation.

Later in the show he head-butts balls with Ferb and blows away a goalie with a powerful kick to the net.

The footballer worth an estimated fortune of £165milllion seemed keen to reinforce his image as a family man on the show.

Earlier this week, he posted a picture of himself cooking risotto for his family and he has been spotted hitting the surf with his boys, Brooklyn, Romeo and Cruz.

David Beckham on Phineas and Ferb