Deauville and neighbouring Trouville, in the Normandy region of France, are only an hour’s flight from London’s City airport. If you’re in need of a seaside fix, here are ten reasons to visit.

1. Deauville is one of Europe’s first holiday hot-spots

Deauville sprang first from the imagination of The Duke Auguste de Morny – half brother of Napoleon III – and then from the marshes on which he built his “ideal seaside” resort. Throw in a casino, a racecourse, a couple of swanky hotels and 1900s Deauville became the place to be seen for French artists, musicians and fashionistas.

2. It’s nice to be beside the seaside

Both Deauville and Trouville’s seafronts are so charming it’s impossible not to feel holiday-ish. Colourful beach umbrellas flutter on the white sand and the wooden broadwalk ambles along the beaches edge. It’s hard to believe you can build a sandcastle here 90 minutes after boarding a plane in London.

The eclectic architecture and larger-then-life grandeur of the villas sitting along the seafront will make you goggle. Many belong to minted horse owners attracted to the city’s year-round equestrian events, and they’re a fascinating insight to how the other half goes on holiday. 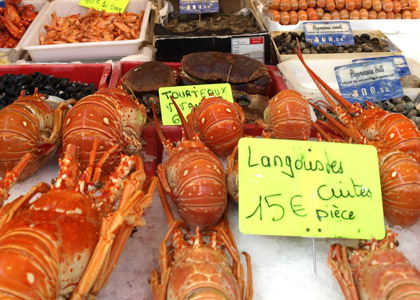 4. You’ll be in seafood heaven

Trouville is still a working port and every day trawlers unload a catch of mackerel, shrimp, scallops and lobster that end up on the fish market or in a restaurant. Restaurant on the beach offer a three tiers feast of fruit de mer for about €10 each.

Trouville is famous for its humorous posters, designed by Raymond Savignac, and you’ll spot his iconic seagulls and sunbathers on walls, billboards and windows. 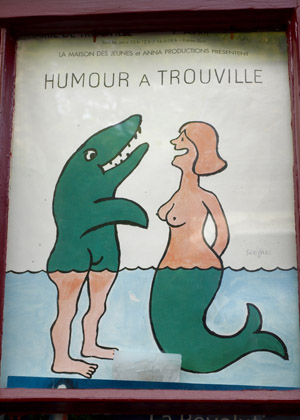 Take a boat trip round Normandy’s picturesque coast. That doesn’t really need selling, does it?

7. The Normandy countryside is beautiful

Visit the Pays d’Auge in the east of the Calvados region. It concentrates all the images of Normandy: charming timber-framed houses and Norman cows grazing the verdant grass under apple trees in bloom.

8. The Calvados distillery does guided tours

An hour’s drive inland, through Normandy’s sun-soaked countryside is
the Calvados Pere Magloire distillery. A distiller will take you
through the stages of making this apple brandy, which has been produced
in the region for centuries. It’s an elaborate process and once your
tour of the oak-barrelled room is over, you’ll be able to sample the
stuff. Brace yourself – it’s potent! 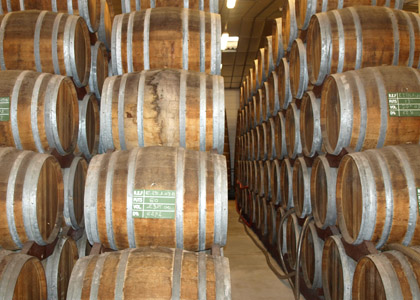 As well as the Calvados, make sure you taste the local cider and apple aperitif (Pommeau).

10. Deauville is really close to London!

And the best bit is, you can fly to Deauville from the City Of London airport in an hour and literally be on the beach 90 minutes after boarding the plane. It’s just a short drive from Deauville to Trouville and you can visit both in a day.

WHEN TO GO: Visit between May and September when there’s less chance of rain and the weather’s at its warmest.
GETTING THERE: CityJet (cityjet.com) flies direct to Deauville from London City Airport from £59 each way.
GETTING AROUND: Deauville and Trouville are small enough to explore on foot.
VISAS: South Africans need a Schengen visa.
CURRENCY: Euro. 1 GBP = 1.20 EUR.
LANGUAGE: French.
GOING OUT: A beer costs ¤2.
ACCOMMODATION: Hotels and B&B start from £40 per night. The cheapest deals may be found inland. For something really special, check out Les Manoirs de Tourgeville (lesmanoirsdetourgeville.com).
GET MORE INFO AT: normandy-tourism.org

25 habits every British tourist is guilty of