If you haven’t done it yet, it’s easy peasy. In a few days you’ll have the respect of friends, admiration of ladies, and access to equipment cooler than James Bond’s tool shed.

Since I passed my Open Water course, I’ve had the pleasure of exploring some of Australia’s best locations, but one site had always eluded me – the Yongala. Rated as one of the top 10 dive sites in the world, it’s like going to the best aquarium and being invited in for a dip.

The SS Yongala was a passenger and freight ship built in England in 1903. After making the trip to Australia, happily plodding down the east coast in 1911, she was caught in a severe cyclone off the coast of Townsville and sank without a trace. She sat beneath the waves undisturbed until it was finally identified in 1958. As it lies within the Great Barrier Reef, the Yongala is classed as part of the reef marine park, and this protected status means diving trips are limited (which means you won’t be doing an underwater conga with 20 other dive ships). Its location also means the wreck has become an established artificial reef, and home to a wondrously rich amount of marine life.

It’s a good three-hour trip out into the deep blue from Townsville, but when the sun is pouring down and the water is flat and friendly, the journey alone is almost worth it.

The wreck of Yongala is 109m in length, resting on its side pointing roughly north. The sea bed here is only 30m deep, and the hot Queensland sun not only makes it a comfortable dive, but provides the warmth essential to making the Yongala such a magnet for marine life. 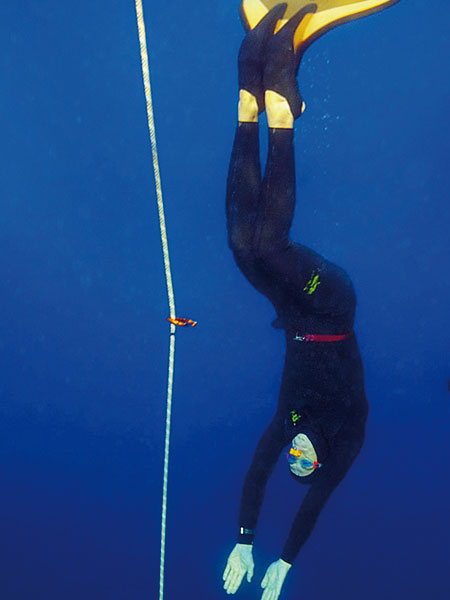 This was my first-ever wreck dive, and to be honest, it’s a slightly surreal experience. As we descended, the dark hull of the Yongala began to take form in the water. Finding a human construction in such an alien environment has an hypnotic effect, and as soon as I spied the shadow of the stern (that’s salty sailor talk for the arse – arr!), I was hooked. As we reached 23m, the Yongala dissolved into the endless blue. If it wasn’t for the thick wetsuit, I would have been very visibly excited.

Calling the Yongala a magnet was an understatement. All kinds of fish cling to the hull, swarming, circling, feeding, cleaning, playing, fighting, sleeping and doing whatever the hell else fish do. They were bloody everywhere. It was literally an explosion of life. Beginning at the stern, we gently made our way alongside the hull, soaking up every aspect of this amazing sight.

The element of scuba diving that appeals to me is the breathing. The less you move underwater, the less oxygen you use and the longer you can stay and explore. Cruising down the Yongala, I was taking my time to look at everything I could find.

The hull is now covered in a dusting of coral, and the ship’s dark insides are home to all manner of shy creatures. I floated still, peering into the hold as two vanilla sea snakes coolly swam out. A dark saucer shape moved and became a hawk’s beak turtle, which looked almost two metres in size. As tempting as it was to explore the Yongala’s insides, its protected status means it’s illegal to penetrate the ship (although this didn’t stop some American nutter a few years back, who did it twice and was treated to a few nights in a cell). But there’s really no need to go any further. The mass of life that sways outside is more than enough. 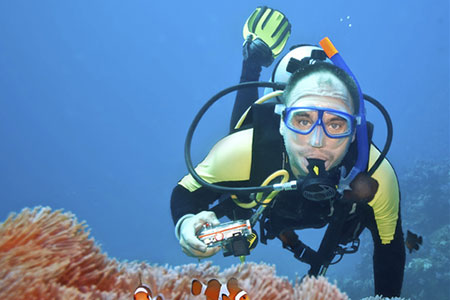 At one point I had the unnerving sensation of being followed and rolled around to find a wall of sparkling grey-blue fish moving and flexing above and behind me. It’s times like that when your air levels take a sudden drop. We’ve all seen it on TV, but when you’re confronted with this teeming pack, it’s completely bewildering. Should I just float here and watch this wall of fluid movement? And when you see this on telly, isn’t it usually around this time some mightily-fanged silver beast shoots into the pack like a torpedo? And if so, what’s behind this school? Time to keep moving.

Reaching the bow and turning back, the nameplate “Yongala” looks like its been cleaned to keep them visible, and it adds another human touch to this otherwise totally alien environment. The slow return trip still swarmed with life. Another hawk’s beak turtle here. A two metre Maori wrasse there. A silver dappled Queensland grouper, about the size of a VW Beetle. A massive pufferfish that surely proves that God spent at least one of his six working days on drugs. And so many more I haven’t got the slightest flipping idea what the hell they are. 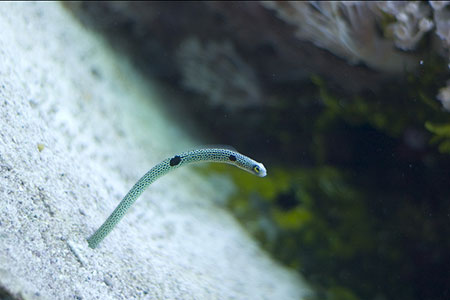 Unfortunately, while I was otherwise distracted, I missed the four metre bull shark casually cruise straight past another group. Bull sharks are reportedly one of the most aggressive to humans, looking at our limbs as tasty chips that go so well with the other fish. It may seem like madness to want to meet this creature underwater, but getting nibbled is highly unlikely. And coming face-to-face with something that could easily eat you is just another one to cross off the list.

The slowness of movement underwater belies the speed time passes. Before I knew it, 35 minutes had gone by and it was time to return to our own world. Surfacing to the warm sun is always good, but the urge to go back down was hard to fight. It was like leaving a really good party too early.

Everything was going on down there, while we were sitting in the sun, drinking sweet tea and biscuits. While before we had been a quite bunch of individuals on a day trip, now we were all mates, eagerly telling tales of what we’d seen and listening to others” experiences.

The Yongala was easily the best dive I have ever done and something I’ll be telling people about for years. It’s not like my mates back home have got anything to compare. Heading back to the mainland in the afternoon sun, I wrote the Yongala down on my “have done” list under my Bee Gees breakdancing.

Three of the best: Spicy dishes