Eager in Riga: beyond the mullets and stag-dos there’s much to discover in the Latvian capital

Although this former Soviet state still bears some of the physical, mental and sartorial scars of its turbulent past, it seems Latvia has moved on, albeit at a characteristically leisurely pace – the tourism board’s tagline is ‘best enjoyed slowly’ – since gaining independence in 1991.

I’m sitting on a sunny beach in Salacgriva, north-west Latvia beer in hand, watching that Ed bloke from Friendly Fires shake his thing.

This is the sixth year of Positivus, Latvia’s most popular music festival, with a line-up that boasts Muse and Manic Street Preachers.

Bordered by beach and pine forests, with no shortage of hammocks to chill in, it sure beats muddy Glasto as a festival location.

Being only an hour’s drive from Riga, it’s a quick trip back into the capital and the quaint, higgledy-piggledy streets of the Old Town.

Despite having gained a reputation in recent years for roving loutish stag parties in search of cheap beer and strip joints, this remarkably pretty town is surprisingly tranquil.

Wonky fairytale-esque houses with pastel-coloured frontages line the cobbled streets, where cafes and bars bedecked with flowers jostle for attention. 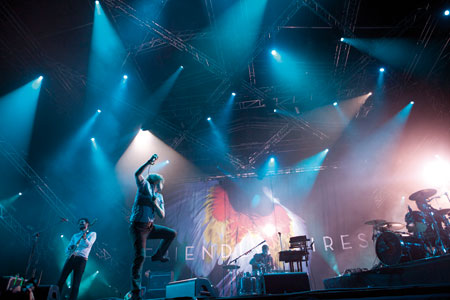 I make a beeline for St Peter’s Cathedral, where I ascend the tower for about £1 and marvel at the fantastic panoramas over the city.

Beyond this is the newly developed Spikeri district, which has quickly become fashionable among new- generation Rigans.

At the artistic hub of this neighbourhood pulses the dirty Deal Café, comprising a bar, theatre, cinema, gig venue and a workshop/ studio space which, when I pass through, is teaching a trendy-haircutted bunch of Rigans how to make music using Nintendo Game Boys.

Cycling has recently caught on in a big way in Riga. I take one of the bright green Air Baltic bikes (the Rigan equivalent of Boris Bikes) for a spin across the river, to the Unesco-protected 18th-century wooden architecture of Kalnciema.

Not many other wooden structures from this period have surived in such fine condition, making it a special destination.

Fortuitously, I arrive in time for the weekly farmers’ market held here, which sells not only locally grown food, but also handicrafts, books, clothes and records. 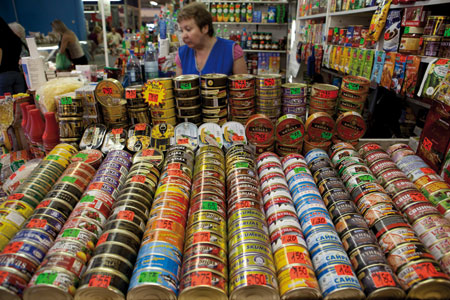 There’s a jovial, relaxing atmosphere, so I hang around until the evening, when the stalls are packed away, and in their place local music acts perform on a small stage and Rigans dance, drink and sing late into the night.

In order to recover, I decide to partake in a spot of diving, travelling half an hour to Sloka Quarry, considered one of the county’s top dive sites.

Accompanied by Zanna Sendeleva from The Baltic Seal Divers Club, we cruise a road separating verdant hills, through a scene dotted with small lakes and the winding Daugava River, until it’s time to wade into the chilly waters for a 40-minute dive.

As shoals of silvery fish swim around us, I relax so much in the serenity of this underwater world, that when our time is up, it’s with reluctance that I return to the surface.

On emerging, we give a group of swimsuit-clad picnickers quite a fright, before they collapse into giggles at our rubber-suited awkwardness. 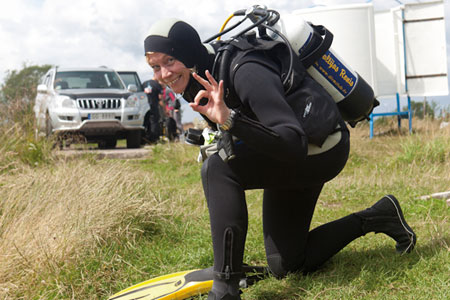 Zanna tells me that out on the west coast, near Liepaja, there are hundreds of Soviet and German wrecks to be explored, sunk during the various occupations Latvia has endured.

I wish I could go, but it’ll have to wait until next time.

See, I’ve already decided on a return visit – my muted expectations of this small, unassuming country have been proved so wrong that I can even forgive the occasional 1980s throwback wandering, unrestrained, in the streets.

Return flights from London Gatwick to Riga start from £65 with Air Baltic.

Budget: Enjoy a three-course meal including a drink for under a tenner at self-service Lido Vermanitis. There is a vast array of food on offer, and a bowl of the startlingly pink but delicious cold beetroot soup is only £1.

Midrange: Housed in a smart renovated warehouse in Riga’s trendy Spikeri district, Kitchen’s chefs take pride in producing excellent food daily. The two-course business lunch for £3.20 is a steal and there’s a pleasant outdoor area with decking for sunny days and warm evenings.

Luxury: Champion of the ‘slow-food’ revolution, internationally renowned chef Martins Ritins insists on local, eco-friendly produce for his unique brand of cooking at Vincent’s. Try the taster menu with wine pairing if you’ve got cash to flash. Expect to pay about £100pp. 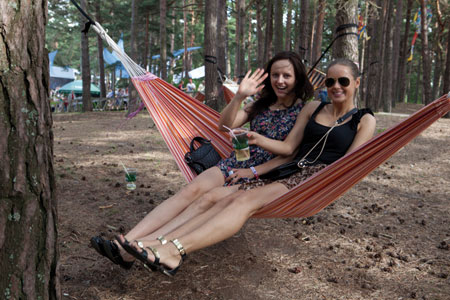 Budget: For a cheap shot of horseradish spirit and a beer chaser to start off your night, look no further than Slavu Merins. This is a traditional Russian-style bar with a few old posters advertising hard liquor on the walls. Have a drink or two and move on, it’s not a place to get comfy. Beers from about £2 a pint. (C-4, Dzirnavu 55/2)

Midrange: Louche, laid-back Latvians frequent this achingly hip cocktail bar. Laze around on one of Piens’ vintage sofas, dance to the eclectic music choice on one of the two large terraces or simply watch the beautiful people of Riga relax in this funky bar. Cocktails about £6. klubspiens.lv

Luxury: If you manage to get past the strict door control at Coyote Fly, you can expect an extremely expensive evening surrounded by the uber-rich, Latvian TV celebrities, foreign DJs and incredibly beautiful waiting staff. Drinks upwards of £10.

Budget: Frequently voted the number one hostel in Eastern Europe, The Naughty Squirrel’s location in the centre of Old Riga is the best in town. From about £10pn for a bed in a dorm.

Midrange: Located opposite Riga’s lush green Esplanade and its imposing Orthodox Cathedral, the Radisson Blu on Elizabetes is one of the city’s most popular and reliable chain hotels.

The Skyline Bar offers unparalleled views over the city, out to the Old Town and across the River Daugava. From £70pn.

Luxury: The Gallery Park Hotel is a beautifully renovated Unesco-protected building with high wooden panelled ceilings and carefully, hand-selected antique furniture from around the globe. Situated just a short stroll from the Old Town. From £190pn.

The daftest travel questions ever asked