East 17 return to the house of love

Although they make no claim to being the greatest band of their time, when it comes to break-ups, East 17 are up there with the best of them. The inter-band punch-ups are reminscent of Oasis and, while they’re no Smashing Pumpkins, they’ve got the on-again, off-again patterns of Billy Corgan and his mates. And yet, the boy from Walthamstow in East London, at the height of their fame in the early Nineties, have bounced back from their acrimonious split and reunited, this time as a three-piece. And it’s all thanks to Tony Mortimer.

“It was a spectacular fall,” says Mortimer, the band’s original songwriter. “If you are going to fall from grace, do it in style. Don’t whimper out.”

Mortimer is referring to the events of 1997, when the four-piece were on top of the world. East 17 were outselling Take That, having amassed 20 million album sales and 18 Top 20 singles. Then, all of a sudden, lead singer Brian Harvey told a radio interviewer, “it’s cool to take drugs” and claimed ecstasy “can make you a better person”. He was immediately booted out of the band and East 17 were finished.

Flash forward to 2012 and, after several attempts, the band are officially back together. This time it’s just John Hendy and Terry Coldwell joining Mortimer and the trio are returning to Australia for the first time in almost 20 years.

“Oh God, 20 years ago, I don’t remember a lot of the nights, but I remember they were big, crazy nights. I have memories of being driven around Kings Cross and we ended up skinny-dipping in Bondi Beach,” Mortimer recalls. “We stayed in this townhouse in Kings Cross. That’s been knocked down now, I’m sure.”

There will be a sense of nostalgia for the audience when East 17 belt out well-known hits such as House of Love and It’s Alright and it seems the band’s founding member couldn’t be happier. To many, he’ll always be the smooth-faced boy singing in his bathrobe but, these days, he’s 41 and has two teenage daughters of his own. 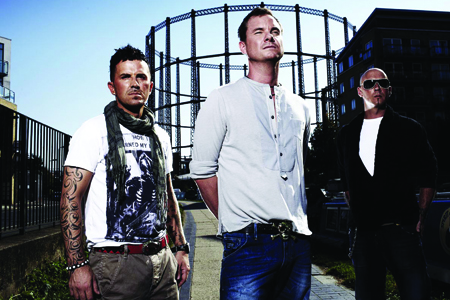 “We want to go back and just relive our youth. When it didn’t hurt our backs so much, travelling all that way to Australia,” Mortimer says, insisting that, although he’s not the same East End lad who wrote the songs about pulling girls, he’s still happy to sing them.

“I was trying to be a poet. I was a teenager when I wrote the song Deep,” he laughs. “When I perform it in Australia, well, let’s just say I’m pushing 40 – OK, I’ll be 42 in October. I mean, try singing songs you’ve written as a teenager at the age of 40. It’s hilarious.”

At least time has engendered a sense of humour in Mortimer. For a band as famous for their pork-pie hats and matching army gear as for their Christmas No 1, Stay Another Day, the guys might possibly look back on their questionable fashion choices with some recrimination.

“It’s funny, because in our day we were kind of the cool band and it was cool to like us,” he says. “But even when you’re really cool, you look back now and you just think, ‘oh my God, how was I wearing that? And how was I thinking that I looked so cool?’ The joy of looking back on your youth. Even if you look at the bands of today that are really cool, look at their haircuts – they are going to hurt in 20 years.

“YouTube – what a nightmare! Who invented that? I want to kill them!” he says. “It’s like, you make a mistake and there it is forever. When we tried to make the first comeback, it was bad timing and a bad time we have tried to scratch. But YouTube won’t let us forget and move on.”

He is, of course, referring to the ill-fated comeback in 2006, which ended in a punch-up between him and Harvey.

“I can’t believe I lost my rag with Brian, but it was a culmination of things,” he admits. “He wasn’t into doing the East 17 thing back then and I was trying to make it work and he wasn’t that bothered.”

When East 17 stumbled into the limelight in 1991, they had no idea their so-called ‘street urchin’ brand of boy-band pop would create such a storm. A young Tony Mortimer had been on the verge of signing a solo deal with London Records until ex-Pet Shop Boys manager Tom Watkins suggested that what the world really needed was an antidote to Take That. Mortimer, however, shrugs off the rivalry. 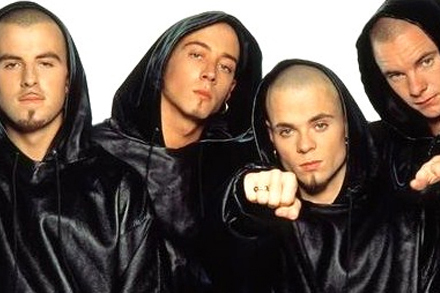 “Take That was the closest thing to us but there was no real rivalry,” he says. “They were middle-class and we were lower middle-class. We tried to behave but we kept messing up.”

The boy-band revival in full steam at the moment and Mortimer believes he has discovered a loophole that will allow East 17 to capitalise.

“If you look at New Kids On The Block, well they have the word ‘kids’ in the name and Backstreet Boys have the word ‘boys’,” he says. “So for them it’s very difficult to break out of the boy-band mould. But with us, well it’s literally just a postcode so we have room to mature gracefully. We should have called ourselves Boys II Men, but someone already took that.”

So, some 14 years after their demise, East 17 signed to FOD Records and released the single Can’t Get You Out Of My Mind (Crazy). Gone are the baggy jeans and wife-beater singlets – in the film clip they’re looking sharp in tailor-made suits. It seems their sound has followed; the track itself is softer, more of a rock ballad.

“The new album is a change of direction,” Mortimer says. “I guess that happens when you’re 20 years older. Terry wanted to do a more live sound. I think everyone is subconsciously inspired by American music and rock ‘n’ roll.

“Terry has written a couple of tracks that he has really rocked out on. He’s like that, though, isn’t he? He’s always been a real rocker.

“Things move a lot quicker in the industry these days. It gets a bit harder to keep up when you get older. I get a bit out of breath.”

So can the weary musicians with their bad backs and wheezy breathing still kick it on stage? Will audiences see the dance moves that made them so popular in the Nineties?

“These days we kind of just stand on stage and move about a bit,” Mortimer laughs. “It gets to a point when you’re too old to be doing a certain type of music and I think we’re old enough to be the dads of the people making club music. It would feel a bit out of place.

“I know that no matter how much you kid yourself, kids that age do not think you’re cool. You know even if you do the greatest dance mix in the world, they’re just going to go: ‘Oh my God, that’s done by my parents – I ain’t buying it’.”

Opinion: Osbourne’s ‘wanker’ joke is an insight into his psyche