So last week’s extraordinary events have led to many having concerns over safety and questions about whether trips already booked should be cancelled. Here, we speak to experts and get the lowdown on making sense of what went on, and whether it’s currently a viable, and safe, destination to visit.

What happened in Egypt?

In scenes reminiscent of the Arab Spring in 2011, when President Hosni Mubarak was overthrown, on July 3, Egypt’s army deposed the country’s first democratically elected leader.

After just a year in office, Muslim Brotherhood-backed President Mohammed Morsi was ousted, sparking demonstrations and protests – both in support and against the action – in city centres, including Cairo, Luxor and Alexandria, where hundreds of thousands of people took to the streets. By Friday, at least 50 people had been killed and hundreds injured. Why did it happen?

Morsi narrowly won last year’s election. In the past 12 months, the strict Islamist has become increasingly unpopular and authoritarian, and he had failed to revive the country’s ailing economy, sparking outrage on June 30, the first anniversary of his inauguration. The military stepped in – with what was clearly a well-planned move – with General Abdul Fattah al-Sisi warning Morsi the army would intervene if the public’s demands weren’t met.

After defying this, and in the wake of protests and violence, 48 hours later, Morsi was overthrown and the Egyptian constitution suspended, with General Sisi making a televised address after seizing control of the state media. Top judge Adly Mansour was sworn in as interim president, elections have been promised, and Morsi, along with many of his team, is under house arrest.

Do other countries support the coup?

Most world leaders aren’t calling it a ‘coup’, instead referring to it as a popular uprising. New Zealand-based Egyptian Charge d’affaires Mahmoud Zayed said the army’s intervention was in accordance with public demands, and said the mood in Egypt was euphoric and celebratory.

He added: “Their [the military] action was based on the will of the people, and based on the massive demonstrations they have seen. People were not happy with the performance of the outgoing administration … and the government was not up to the expectations of the people.”

Australian PM Kevin Rudd called the developments “extraordinary”, but added: “I would simply say on behalf of all Australians, we want to see the return to full democratic government in Egypt as rapidly as possible.” While Australian foreign minister Bob Carr described the action as “deeply disappointing”, but said Australia does not oppose it and that there are no plans to close Australia’s Embassy in Cairo. 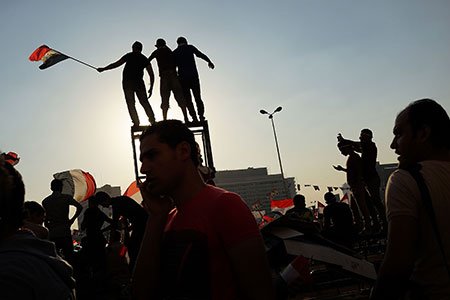 Which areas of Egypt are affected?

The British FCO is advising against all travel to North Sinai, and “all but essential travel” to most of Egypt, but that doesn’t include the popular touristy coast of South Sinai.

However, travel guru Simon Calder writes in The Independent: “It is only advice; travellers to other parts of Egypt cannot be compelled to stay away.”

The FCO also said it’s not “recommending immediate departure” for those already in the country. The Australian and New Zealand governments have asked travellers to “reconsider your need to travel” – below the high-alert “do not travel”.

Carr added that there’s been no evidence that Australians are being targeted. He said anyone planning to travel to Egypt should remain alert to developments, register their travel intentions with the embassy in Cairo and monitor any travel advice issued by authorities or consular staff.

“Our strong advice to all Australians in Egypt is to avoid involvement in street protests, even as an observer,” he advised, perhaps stating the obvious. How long will the restrictions be in place?

Travel trade association ABTA spokesman Sean Tipton tells TNT: “Going from past experience, when we had the Arab Spring, the FCO advice against travel to cities was in place for about a week. The situation improved very quickly. But, as it stands, the advice makes very clear which parts of the country it applies to – the main urban centres, such as Cairo and Luxor.

“However, if you look at where most people take their holidays, 90 per cent are to the Red Sea resorts, which are totally unaffected by this, so there’s no impact at all.

“If you’re going there, it’s irrelevant what’s going on as you won’t notice.” ABTA added that the effect on travel to the country would be relatively minor as it is not peak season. “Hopefully the FCO advice will be lifted shortly, and it will be safe to go,” Tipton added.

The Olympics formerly known as: Redneck ‘Blank’ Games get underway in the United States

Life In A Day: review and trailer

F1 Aussie Daniel ‘still in it’ after podium finish in Singapore