Protests in Egypt turned violent on Thursday and five people have been killed when supporters of President Hosni Mubarak opened fire on the demonstration.

Despite the deaths and more than 800 injuries, protestors remain in Tahrir Square calling for Mubarak to stand down after his 30-year rule. Thousands of bandaged protestors have barricaded themselves into the central Cairo square, vowing to remain until Mubarak goes.

There has been no official confirmation of who was behind the shooting. However, demonstrators claim it came from Mubarak supporters.

Last night machine gun fire could be heard for more than an hour and this morning, groups of pro-Mubarak supporters were seen moving again toward the square with knives and sticks, reports the Independent.

Egyptian Health Minister Ahmed Samih Farid told state television that five had died and 836 were wounded in violence which began during Wednesday’s protests. He said most of the casualties were due to stone throwing and attacks with metal rods and sticks.

The army, which is a major political force in Egypt, has appeared to back the protestors and promised not to use force to break up the demonstration.

However, according to protestors, many of whom were injured this morning, the army did nothing to intervene when they were attacked. 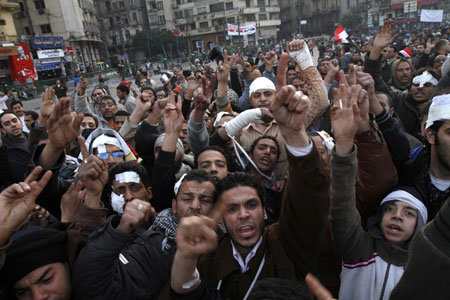 “When we come here, they search us for weapons, and then they let armed thugs come and attack us,” a doctor taking part in the protests told the Independent. “We refuse to go. We can’t let Mubarak stay eight months.”

The Muslim Brotherhood, a mass movement previoulsy banned in Egypt, issued a statement on Al Jazeera calling for Mubarak to stand down

“We demand that this regime is overthrown and we demand the formation of a national unity government for all the factions,” the Muslim Brotherhood said.

Egyptian officials have appealed for an end to the protests, saying: “Your message has arrived; your demands have become known.”

However, protestors have vowed to continue their fight until Mubarak stands down.

“One way or another we will bring Mubarak down,” protesters chanted this morning. “We will not give up, we will not sell out.”