Alastair Cook’s side were 4-90 at stumps on day four, chasing a record target of 481 to win the match.

With victory almost certainly off the cards, the Black Caps will smell blood when they come out to bowl on day five.

Setting up the likely win for England were the late losses of Cook for 43 and night-watchman Steven Finn, who both played shots they won’t be proud of.

Earlier, opener Peter Fulton backed up his first innings tonne – his debut Test century – with 110 before the hosts declared on 6-241.

Fulton, 34, became the fourth Kiwi in history to hit hundreds in the same Test.

In reply, England’s chase got off to a horror start with opener Nick Compton caught behind off the bowling of Tim Southee.

Jonathan Trott steadied things and reached 37 before flashing at a wide one from Neil Wagner and edging to Watling.

With Cook considered the most likely to stonewall for the 143 overs required, the captain got a thick edge to slip while attempting to drive spinner Kane Williamson. 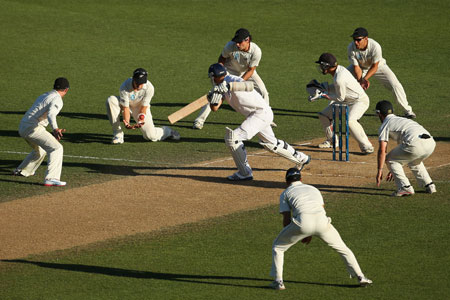 Finn fell for the trap of a super attacking field, with eight close-in fielders, in last over of the days when he reached for a Williamson ball that was edged and caught at gully.

Ian Bell has dug his trench, scoring just eight from 89 balls, making his intentions for survival rather than accumulating runs clear.