Cook did all the hard work against a relentless Aussie pace attack but fell on 72 to Nathan Lyon, a key wicket considering England have also lost Carberry (43), Joe Root (4) and Kevin Pietersen (19), out for the 10th time in his career to Peter Siddle.

After wrapping up the Aussie tail having added 59 to the overnight score, England set out to chase down the first innings total of 385 and finished the day 205 runs behind.

England would have won the day had Cook and Pietersen not fallen late, but they’re now precariously placed and Australia are in the box seat to win back the Ashes for the first time in seven years and take an unbeatable 3-0 lead in the series. 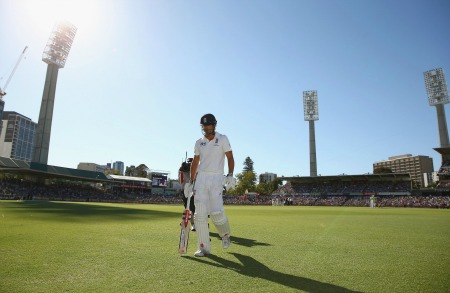 There was of course controversy, with Joe Root given out caught behind off the bowling of Shane Watson. It must have been a feather as the video umpire couldn’t muster enough evidence to overturn Marais Erasmus.

Pietersen was out of character grinding out an innings, 19 off 92, before a short ball got too big on him and Michell Johnson took a good catch. His three singles from 38 balls was his slowest ever start in Tests on what is a good batting deck.

Carberry was bowled after lunch playing on to Ryan Harris for 43 and Cook was out again cutting.

Ian Bell (9no) and Ben Stokes (14no) were both fighting at the end of the day and will be ready to cop an onslaught from a rested attack on day three with the game in the balance.

First direct flight from the UK to Puerto Rico