In the first Test in Brisbane, Johnson bowled 10 of his 229 deliveries on the stumps, leaving England’s batsmen feeling a bit stupid for not leaving him largely alone.

But in Adelaide, with the pitch less lively than in Qld, the left-armer’s gone with tracer bullets at the pegs instead.

Bell, put up for interview after again he was a lone hand in his nation’s resistance, with 7-40, refused to give the game away with two days to play.

“These games are savable,” Bell said.

“But someone is going to have to play an incredible innings.” 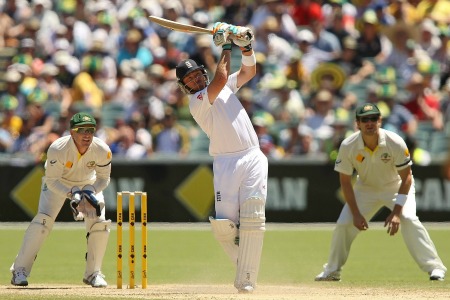 Australia are 530 runs ahead of England and will declare at some stage on day 4 – earlier than later you’d expect.

Johnson’s threat in Brisbane came from pace and bounce, but Adelaide is a whole other story and usually a batting paradise – unless you’re England in the first innings apparently when they were rolled for 172. Bell scored 72 of them.

“If you want to bat a day at a ground, this is the ground to do it,” Bell said. “But what we have done in the last three innings isn’t going to get us close. Someone, or probably two or three guys, have to really step up.”

“In that dressing room, there is going to be no excuses,” said Bell, who top-scored with an unbeaten 72.

“It’s just not good enough and we need to make sure that we put that right.

“We’ll have an opportunity in the second innings to at least try and show people we’re going to show some fight.”