He was gracious and fearless in the same breath, with a boundless passion for his cause but able to wear the pain of compromise to achieve progress.

He called himself “Not a prophet, but a humble servant” on his release from Robben Island in 1990.

As a president and fighter for freedom and equality, the news of his departure is clearly significant to world leaders, who have spoken in praise of his achievements.

But he touched all walks of life in his campaign for AIDs sufferers and he preached that “Sport has the power to change the world”, and his decision to wear a Springboks jersey before they won the World Cup in 1995 was not insignificant. 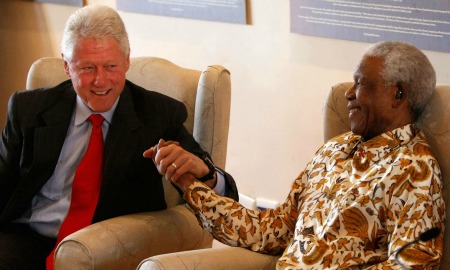 David Cameron: “A great light has gone out in the world. Nelson Mandela was a towering figure in our time: a legend in life and now in death – a true global hero.”

Barack Obama: “Today he has gone home and we have lost one of the most inspirational, courageous and profoundly good human beings that any of us will share time with on this Earth. He now no longer belongs to us, he belongs to the ages.”

FW de Klerk: “This emphasis on reconciliation was his greatest legacy.”

Desmond Tutu: “He was a unifier from the moment he walked out of prison.”

Francois Hollande added: “Nelson Mandela’s message will not disappear. It will continue to inspire fighters for freedom, and to give confidence to peoples in the defence of just causes and universal rights.”

Tony Abbott said: “He spent much of his life standing against the injustice of apartheid. When that fight was won, he inspired us again by his capacity to forgive and reconcile his country.”

Ban Ki Moon: “Only because of such a great man like Nelson Mandela is it possible that particular people in Africa and elsewhere are able to enjoy freedom and human dignity.”

George W Bush: “He bore his burdens with dignity and grace, and our world is better off because of his example.”

Bill Clinton: “History will remember Nelson Mandela as a champion for human dignity and freedom, for peace and reconciliation.”

Boris Johnson said: “When the definitive history of our time is writting, the name Mandela will stand taller than most – perhaps tallest of them all.” 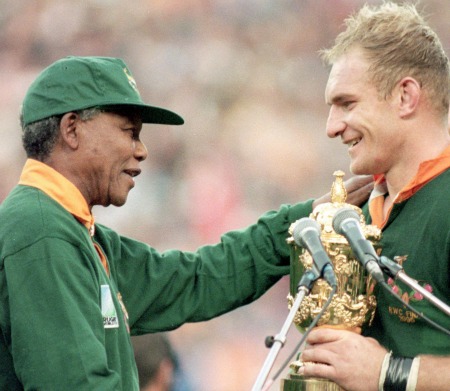 Ronaldo:  “Thankful Madiba for your legacy and your example. You”ll always stay with us.”

Bryan Habana: “R.I.P Tata Madiba. Thank you for the inspiration and hope. May your legacy live on forever.”

Joost van der Westhuizen, who played in the 1995 World Cup final, said on Twitter: “A sad day for our country. Rest in Peace Madiba. Condolences to his family and friends.”

Cricket South Africa: “RIP Tata Mandela. It is because of you that a represented Proteas team can express their talent across the globe.”

Gary Player: “Nelson Mandela’s courage, forgiveness, love & hope inspired people around the world. He made me want to be a better man.”

Usain Bolt: “One of the greatest human beings ever. May your soul rest in peace. The world’s greatest fighter.”

Saracens rugby union club: “RIP Nelson Mandela – He reminded the world of the power of reconciliation and the power of sport.”

Steven Pienaar: “In tears The Father Of the Great Nation Have Past On. R.I.P TATA MADIBA.”

Whoopi Goldberg: “I want 2give the world a hug I was told Mandeba just passed. Nelson Mandela R.I.P. Time for a well earned sleep. Condolences to his family.”

William Shatner: “I hope the great work started by Nelson Mandela continiues to spread across the world. He will be remembered as an icon for equality.”

Kelly Osbourne wrote: “Today is officially one of the saddest days! The world has lost the most inspirational person to every walk the earth RIP #NelsonMandela.”

Bono: “He was an idealist without naiveté, a compromiser without being compromised.” (Bono has written an article on Mandela for TIME – you can read it here.)

Charlize Theron: “My thoughts and love go out to the Mandela family. Rest in Peace Madiba. You will be missed, but your impact on this world will live forever.”

Paris Hilton: “Just landed & heard the sad new about Nelson Mandela. He was a true Hero & the world is a better place because of him. May he rest in peace.”

Arnold Schwarzenegger: “President Mandela’s life is the closest thing we have to proof of God.”

Museum lates: The definitive guide to after hours events in London attractions