With four wickets left they’ll have to bat out the entire days – day four was the first time the tourists had batted through a day.

Forecasts for some stormy weather no doubt informed Michael Clarke’s decision to declare before the start of play 531 runs ahead to give his bowlers maximum time to knock England over and take a 2-0 lead in the series.

The 284 runs England have to get will hardly be on their mind when Matt Prior (31no), who’s grossly out of form and will use the day to get some touch back, and Stuart Broad (21) resume.

It wasn’t all bad for England, though they had a nightmare start when they fell to 1-1 when Alastair Cook top-edged an ill-advised pull shot off first innings destroyer Mitchell Johnson. 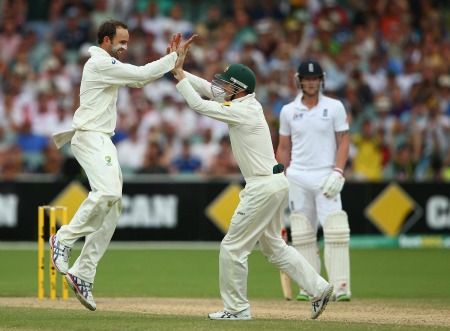 It was 2-20 the same way, this time Michael Carberry off the bowling of Peter Siddle.

Joe Root was excellent for his 87, with Kevin Pietersen entertaining himself on the way to 53 before inside edging Siddle onto the top of his stumps – their partnership of 111 was the biggest for England of the series.

In-form Ian Bell fell horribly to a full toss from part-time leg-spinner Steve Smith – he was trying to hit it out of Adelaide Oval but it didn’t make it off the square and fell to Johnson.

Root then fell to Lyon, edging onto his thigh and into the gloves of Brad Haddin.

Ben Stokes was gallant for 90 balls before Harris with a new rock struck, finding his edge to Clarke at second slip for 28. 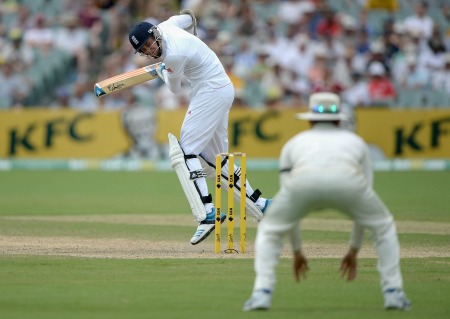 Broad and Prior copped a barage from Johnson, but both fighters battled through and found the boundary a few times too. Their top order counterparts could take not.

Whether they can do it for another 90 overs, with a limp tail to follow – including rank No 11s James Anderson and Monty Panesar – is another story.

Australia will start day five with the ball just 10 overs old and with their tail up ahead of bowling at the tail end.

And they’ll be keen to take that momentum into the third Test in Perth, starting Friday.

The call of the Sea

Give us a giggle – Bridget Christie: The comedian on the strangest show she’s ever done