Europe’s best surf schools: From Canary Islands to Ireland, learn to ride waves like a pro

Just a few hours’ flight from London are a huge range of sunny beaches, perfect for anyone looking to spend the summer on a surfboard. If it’s your first time to any of these destinations – or even if you’re an old-timer – why not sign up for a week at one of these local surf schools?

Instructors not only help to improve your technique, but can give you insider local knowledge on their best breaks and even link you up with other wave riders. 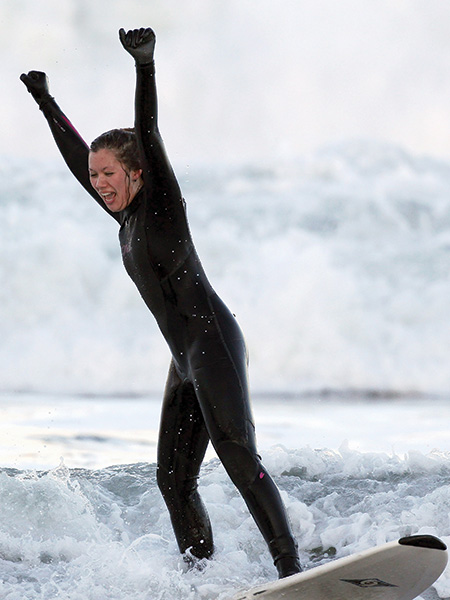 Surf: Are you the kind of surfer who lives and breathes the sport? Lagos is the place for you this summer then, as the town is swamped with bronzed, bead-wearing surfers here to make the most of the wide choice of reefs and beach breaks.

It’s a firm favourite on the circuit because of the year-round wave consistency, and the fact there are breaks on both the southern and western coasts, so there’s always somewhere to surf within a 30-minute drive.

Get schooled: The longest running surf school in the area is The Surf Experience, which is an Aussie and Brit-run establishment providing everything you need for a sensational surfing summer. Board and wetsuit hire, surf instruction, boot camps (including a girls-only option) are all on offer. There are also daily tours in the instructors’ 4x4s to wherever the surf’s up that day.

Apres-surf: If you head to Lagos, be prepared to spend as much time in the watering holes as in the water – this has a reputation for being a serious party haunt, and you’ll find Aussies propping up practically every bar in town.

In fact, some hostels even hand out wristbands to their guests in case they get so plastered they can’t remember where they’re staying and they can be sent back in the right direction.

Getting there: Fly from London Luton to Faro from £129 return with Monarch Airlines. 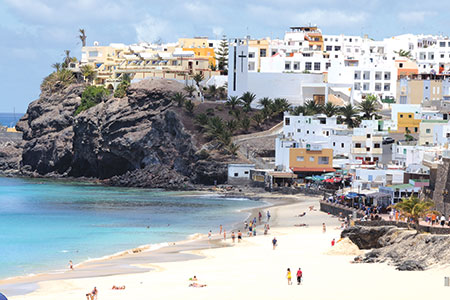 Surf: Fuerteventura’s north shore has been called Europe’s answer to Hawaii for its reliable surf conditions and warm waters. The main surfing area is at the far north of the island, around Corralejo, where you’ll find beach and reef breaks and if you’re lucky, some big wave action – mercifully far away from the chaotic tourist hubs of the island.

Get schooled: Based in Corralejo is Wave Rider Surf School and it’s just a short trek to a range of top surf spots. Lessons are taught in groups of no more than six and instructors are accredited by the ASI (Academy of Surfing Instructors) and SLSA (Surf Life Saving Association).

Apres surf: Fuerteventura can get windy at times, which can make it a bit choppy for surfing. But that just makes it perfect for kite or wind surfing. For long, beery lunches or laid-back drinks in the evening, try the surfy, hippy cafes dotted around the village of Lajares.

Getting there: Fly from London Gatwick to Fuerteventura from £196 return with easyJet. 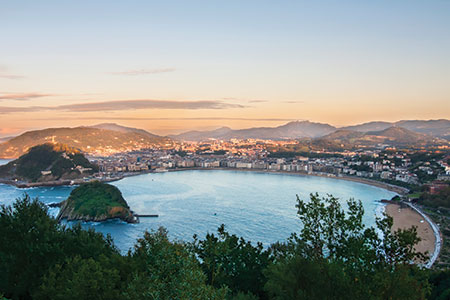 Surf: You couldn’t choose a more scenic surf locale than the long, curved, urban beach of La Concha, San Sebastian, with its gentle, relatively small waves. But if you want somewhere a little bolder, head to La Zurriola beach on the other side of the Urumea River where there’s regularly a great northwest swell. Because the waves aren’t the same quality as Mundaka, where the tube riders go, it doesn’t get too overcrowded.

Get schooled: If you stay at Urbansurf Stay at Urban House you’ll be 300m from the beach, and their week-long packages also include breakfast, board and wetsuit rental, and a 90-minute group lesson each day with an instructor. Reduced group classes, private classes and intensive weekend classes are also available.

Apres-surf: You certainly won’t run out of activities to keep you occupied in the Basque capital. Urban Surf run pintxo tours, so you can discover all the best places to refuel on the local-style tapas, plus boat parties and trips to nearby Bilbao to check out the Guggenheim and other attractions.

Getting there: Fly from London Stansted to Bilbao from £86.99 return with easyJet. 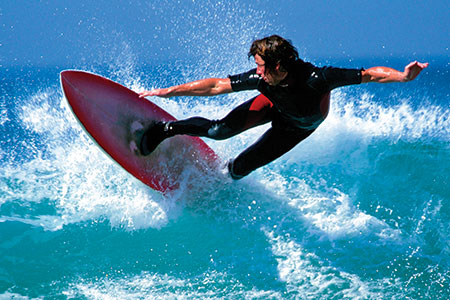 Surf: So Ireland may not be known for its gloriously sunny weather, but the surf is so good in Bundoran, in County Donegal, that no one cares. It’s all about doubling up on the wetsuits and getting out there in the chilly Atlantic Ocean. From big barrels to fast breaks, whatever kind of wave you’re after, you’ll find it here – most surf spots are easy to get to by bike or on foot from the town.

Get schooled: First-timers should go for a surf and stay package deal at Bundoran Surf Co, which includes bed and breakfast accommodation at the Surf Lodge and a varying number of group lessons.

The company also runs an academy which is aimed at intermediate level and above surfers – to work out what you are, the minimum required level of ability is to be able to catch an unbroken wave on a hardboard, have a reasonable pop-up and be able to paddle out the back most of the time.

Apres-surf: Despite the fact Bundoran is a fairly small town, in typical Irish style, there are still more pubs here than you’ll know what to do with. As soon as you get out of the water you’ll want to head to one of the locals to warm up by the fire with a pint of Guinness and some hearty Irish pub grub.

Getting there: Fly from London Gatwick to Knock from £123pp return with Aer Lingus. 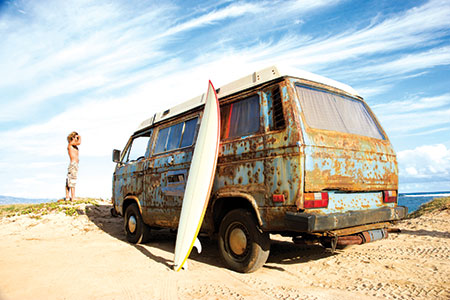 Extreme surf spots: Would you brave sharks for a wave?

Most people associate a surf holiday with warm weather, golden sands and, well, fun. But at these extreme spots, surfing can be a dangerous game. From plummeting temperatures to vicious shark attacks, these are the sets only Europe’s most daring are willing to catch. 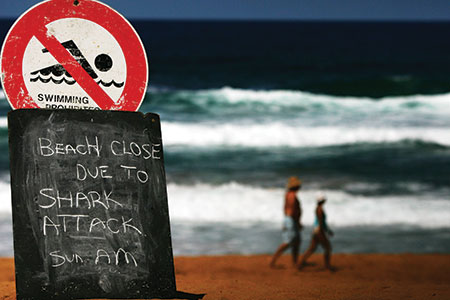 Every surfer’s worst nightmare came true for one poor chap surfing off the coast of France’s Reunion Island in the Indian Ocean just last month. A killer shark attacked him as he was out catching waves (on his honeymoon – just to make the story even worse). This is the third fatal shark attack to take place on the island in the past two years, so probably a spot to avoid for the time being. 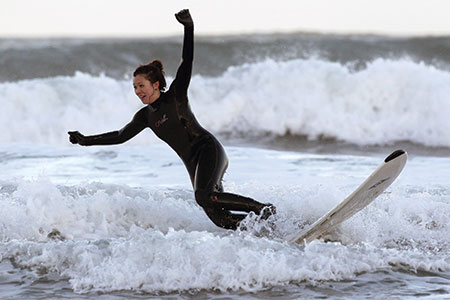 Anyone surfing around the UK is used to a few chilly changing sessions with numb fingers and toes, but hit the waves in Iceland and you’re into a whole new level of agony – the water temperatures are as low as 2-3°C. Is it worth it? Lots of people seem to think so, as there’s a tour operator in action, Arctic Surfers, which runs surf and camping trips, along with surf and ski trips, to truly make the most of the icy conditions. Only for the truly insane, we think. Brrr! 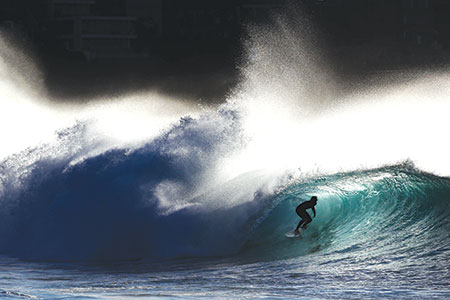 OK, so we’ve been banging on about how brilliant the surf in Portugal is, but that’s not to say some parts of the coast aren’t absolutely lethal, especially if you’re not a big wave expert.

Waves in Nazaré are so notoriously powerful that they’ve been nicknamed the “surfboard breaking machine”. In fact ‘big wave’ takes on a whole new meaning here due to the undersea canyon that runs between the cliffs and the shore and creates huge surges of water that are only surfable by real professionals – and even then it’s seriously bonkers.

The record for the biggest wave ever surfed was broken here in January this year by Hawaiian rider Garrett McNamara. It was over 100ft high.

The Great Escape to Moreton Bay

Review: Top Hat at the Aldwych